loss and recovery
by Douglas Messerli

Joel and Ethan Coen (writers and directors) Inside Llewyn Davis / 2013

The Coen brothers’ new film, Inside Llewyn Davis, is a bleak, if beautiful and loving, study in loss and recovery, whose central figure, a down-and-out folk singer, wanders the streets of New York and travels briefly—a trip he suggests has seemed like a longer voyage—to Chicago. As in the directors’ earlier film also focused on the music industry, O Brother, Where Art Thou?, the hero of this new work is a kind of Ulysses, a journeying man who, in this case, cannot seem to find his way back to his Ithaca and has no Penelope waiting for him at home. 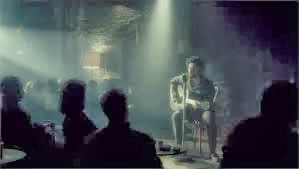 The film itself represents a kind a trip back in time to the early 1960s, a far more innocent but also politically-committed period, particularly in the serious folk-singing gigs in the then gritty Greenwich Village of the day, where seriously-minded audiences gathered to hear everything from ballads of love, life, and death to renditions of sea-chanteys and harp-playing grannies. The film begins, in fact, with Llewyn Davis singing a sad ballad about being hung and buried, emotively performed by actor Oscar Isaac, who is nearly perfect as the darkly-obsessed Davis. 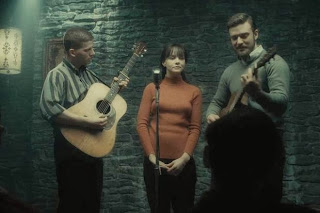 Who wouldn’t be obsessed by dark thoughts living in the Coenesque world where nearly everyone is unlikeable and, more importantly, plain unfriendly. The minute after Davis sings his sad song, he is called into a back alley and beaten by a black-suited stranger. Soon after he crashes on the couch of the parents, the Gorfein’s, of his former singing partner (a man who inexplicably has committed suicide sometime earlier by jumping from the Williamsburg Bridge (a queer thing to do, later argues fellow traveler Roland Turner (John Goodman);”People jump off the Brooklyn Bridge”). As Davis goes to leave, the Gorfein family cat rushes out the door as it closes behind him. With no key to return the cat, Davis, for much of the rest of the film is stranded in the freezing city streets without a coat, lugging about his guitar and the orange-colored tabby cat. 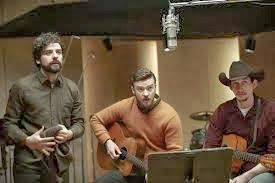 Ill at ease in social situations, he is the kind of man who always says absolutely the wrong thing, alienating almost all those around him. Only when he sings does he become somewhat likeable. Meanwhile he has impregnated a series of women, one of whom has, without telling him, decided to keep her baby and move back to Akron, Ohio, and another who is the folk-singing wife, Jean Berkey (Carey Mulligan) of friend, Jim Berkey (a highly likeable Justin Timberlake, with whom Davis later sings the film’s only comic number, “Please Mr. Kennedy”). Jean can hardly speak a sentence without expressing her emphatically open hostility towards Davis. Davis’ bourgeois sister does not want him around her place for fear he might influence her young son. Davis’ father, a former merchant seaman, sits in a retirement home with what appears to be late-stage Alzheimer’s. Desperate just to survive, Davis must try to “hit up” on everyone he meets for a cash loan or simply a place to crash for the night. 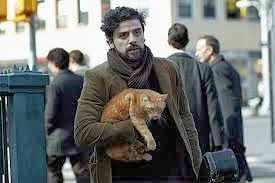 Yet, of all this film’s characters Davis is the most likeable, perhaps just because he can, at least from time to time, express his insides through singing, and he is, if nothing else, honest. And then, there is Davis’ near pathetic attachment to the cat, which he loses, rediscovers, loses again, and finally is forced to leave behind to die. The cat not only has several lives in this film, but shifts of sex (the original cat who has escaped was a male, but Davis returns to the house with, evidentially, a female cat [note: from personal experience, I can tell you that the sexuality of cats is hard for a layman to determine; see My Year 2006: Serving]). So too, it is hinted, may Davis’ own sexual shift. Although he clearly has heterosexual sex, for which he is regularly berated, his vague relationship with his former male partner may have something to do with that singer’s suicide. And one of the most explosive scenes in the film occurs when his former singing partner’s mother attempts to sing her son’s part when Davis is asked to perform in their house. As the owner, Johnny Five, of a famed local bar suggests about the singing duo of Davis’ “friends,” the Berkeys: “Half the audience comes to see them because they want to fuck her; the other half want to fuck him.” Johnny has also “fucked her,” which is why she keeps acquiring venues at his club.

Perhaps the weakest scenes of this film have to do with Davis’ longer, unplanned, voyage to Chicago with the drugged-out blow-hard who Goodman plays and his quietly intense, poet-writing, and ex-con driver. But it certainly offers up another Coen-created voyage into the absurd in which this modern-day Ulysses faces even more surreal trials and tribulations. And in many of that voyage’s images, the Coens and their cinematographer Bruno Delbonnel stunningly capture the vast spaces and isolation of the American Midwest. The outlandish character, Turner, moreover, is also a true loser, along with his so-called “chauffeur,” both lotus-eaters who have consumed the dangerous substances which our Odysseus has apparently escaped (Turner comically describes that terrifying body-alternating food as “Welsh Rabbit,” in mockery of Llewyn’s Welsh-inspired first name.) Finally, Davis is left alone in this vast space, once again, without the keys to alter or even continue his journey. And this time, he guiltily perceives he cannot move forward with a cat in tow.

In Chicago, finally, Davis makes his way to another famed singing spot, Gate of Horn, hoping to be given a contract and to find a new manager, only to be told by the renowned Bud Grossman (F. Murray Abraham) that Davis doesn’t have the charisma to go it alone.
Completely defeated, our wandering hero attempts to sign on (like his father) as a merchant seaman, but can barely afford the union dues, and later discovers that his sister has thrown out his seaman license.
Time repeats itself, as Davis returns to the Gorfein apartment in which we first saw him. The cat, Ulysses, it is reported, has returned all by himself. At a one night-gig at the Gerde’s Folk City, Davis performs the song we heard at the beginning of the film, and follows it by another, not shown in the first scene. The next act is a young Bob Dylan (Benjamin Pike). As before, Davis is told there is a man in a suit awaiting him in back, and he returns to the alley to be brutally beaten by the man whose wife Davis had heckled the evening before. It appears that this gentle beast is doomed to slouch toward Bethlehem over and over. Yet simply because he dares to stand and begin the voyage again he must recognized as one of the most loveable beings the Coens have yet created, making this one of their most moving and astonishing films.

Posted by greenintegerblog at 7:53 AM