John Ford | The Grapes of Wrath


what people do
by Douglas Messerli

Nunnally Johnson (screenplay, based on the novel by John Steinbeck), John Ford (director) The Grapes of Wrath / 1940

Having just watched John Ford’s The Grapes of Wrath again last night, I find myself a bit perplexed at having to describe the work. Having abandoned most of Steinbeck’s social screed, Nunnally Johnson’s script pares down the story to make it a kind of depression road movie, as the Joad family, forced to leave their home, makes its way from Oklahoma to California, with several stops along the way. As Daniel Eagan writes, the family seems less like the wave of Okies who made the same trip than innocent and lonely frontiersmen, which takes the film in a strange direction as the family seems to become more and more isolated from those around them with whom they might have joined up in their despair. Only the ex-prisoner Tom (Henry Fonda) associates with others, and it is he who ultimately leaves the family fold in an attempt, perhaps, to change society through a longer voyage than the trip has allowed him. Yet even that somewhat positive ending—as opposed to the near certain starvation and death facing Steinbeck’s Joads—is so vague that we have little idea how to interpret his departure. It may be that he has simply once more gone on the run. Indeed, Fonda’s Tom begins the film as a kind of loner who in his stoic quietude keeps his family at arm’s length, if only to protect them from being involved in his past. 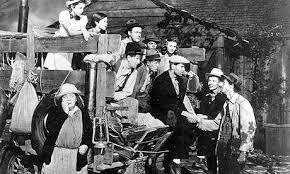 One wonders, accordingly, what seems so appealing with this fairly empty story. Yes, there are the occasional quaint philosophical-like musings coming primarily from the mouth of the the ex-preacher Casy (John Carradine): 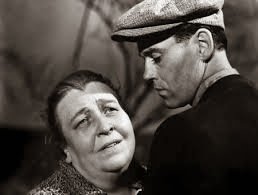 And there is the wonderfully warm and loving performance of the open-hearted survivor Ma Joad by Jane Darwell. But hardly anyone else in this film gets more than a few lines. Yet the film does, somehow, stay with one, mostly through Ford’s, his cinematographer’s, and designer’s images: the preposterous truck stuffed with family and furniture, the silhouetted shuffle of the family across the harsh American landscape, the jumble of tar shacks and tumble-down buildings of the migrant camp. Seeing this film again, I perceived that it is not so much what Ford and Johnson say in this work, but what they show, how they let us know what people do. In fact, one might argue that the Joad family is not represented real folk but as an emblem of an Okie family on the road. And as such they are not actually allowed to do much except to move through space, shuffling in and out of camps and, again like pioneers, scanning the lay of the land. Mostly they simply symbolize Ford’s sort of sentimentalized notion of “family.”

Ultimately, it is this emblematic quality that raises the Joad family to the level of the iconic. They are not just a family but every family forced to leave their home on a journey to a new land. They are not just depression heroes but share in the voyage of every American emigrant. When they speak, it is mostly in empty phrases such as “You done what you had to do” or “We was family.” Only the family outsider, Tom, is allowed to speak of anything specific, but his words are most often couched in questions rather than politicized statements: “What is a red anyway?” 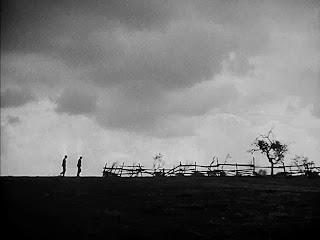 It is their iconic quality, accordingly, that makes the Joads so watchable and memorable. But for the same reasons Ford’s film represents less a story or even a series of incidents than a sentiment, a kind of homely and gritty Hallmark card that encourages its audience to mutter: “There but for the grace of God go I.” Had Rosasharn been permitted by the writers and censers to open her blouse, pull out her tit, and let an old man suck, the whole cinematic version would have collapsed in the blush of suddenly revealed humanity. In the film everything must remain vague for the Norman Rockwell-like portrait of the film to be maintained.