abstraction and individuation
by Douglas Messerli

Aleksandr Dovzhenko (writer and director) Земля (Russian, Zemlya) (Earth) / 1930
Dovzhenko’s great film of 1930 was intended to be a kind of Russian propagandist film encouraging Ukranian kulak (individual and often rich farmers) to join with one another in establishing state collectives, and the kernel of the tale of kulak unrest and the murder of a young member of the komsomol, Vasyl (Basil) (the beautiful Semyon Svashenko) remains at the core of Dovzhenko’s movie. And the film, in outline, presents its political “plot.” 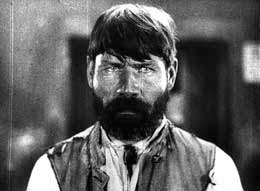 Despite the opposition of Vasyl’s father, Semyon (Nikolai Nademsky) and his uncle Opanas (Stepan Shkurat) are opposed to it, as are their neighbors, Arkhip Bilokin (Ivan Franko) and his son Khoma (Thomas) (Pyotr Masokha), preferring to work the rich land and its harvests in the old manner of oxen and plow.
To prove them wrong, Vasyl and his compatriots arrange to have a tractor sent, and proudly drive it through their small village, with crowds arriving to gape at the new wonder. When suddenly the tractor stops, the driver discovers that the radiator is dry. With no water in sight, the komsomol members are stymied until the driver suggests that the men piss into the radiator, and the tractor moves forward again.
The following montage shows Vasyl busily harvesting the wheat, demonstrating the entire process of gathering the grain to the production of bread. But in the process he also destroys the fences belong to the Bilokins. That night, as Vasyl joyfully dances home, he is killed by Khoma.
Distraught by the death of his son, Semyon orders the priest off his land, and asks Vasyl’s friends to bury him instead, in a new manner with contemporary songs, since his son believed so strongly in the future. They agree to do so, and the entire village joins them in a joyous celebration of Vasyl, Khoma going mad in the process and admitting his guilt.
Vasyl’s glory will fly around the world, argues one friend, just as does the new Soviet airplane. So ends the “propagandist” aspects of Dovzhenko’s tale.
Had the director simply presented this in simple terms, the authorities might have been pleased, but history would never have bothered about this masterwork, often rated today as one of the most important works of film history. It is almost as if, mesmerized by his homeland’s landscape, families, products, and cultural perspectives, Dovzhenko could not resist celebrating them in a manner that renders his film’s political intentions nearly mute. Soviet critics of the day certainly seemed to miss the basic story, describing the film as “ideologically vicious.” 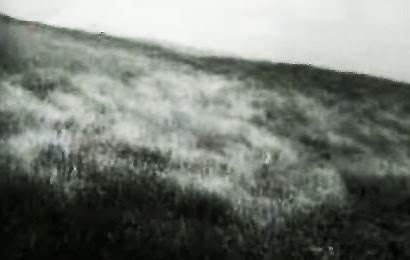 The film begins with vast waving fields of grains, lingering camera shots of apples and pears, and the death of a family elder, who just before dying, sits up to eat his last pear. Family individuals are shot separately as in 19th century portraits, usually with camera looking up and directly into their worn and drawn faces, or, in the case of the handsome Vasyl, portraying him in silhouette, looking off into the distance, obviously symbolic of the direction he would take his family and friends. *
In the long scene in which we see Vasyl harvesting the wheat, Dovzhenko turns his basically realist tale into a series of abstract images, as the wheat and its chaff go hurtling endlessly through space, with Ukrainian maidens gathering the bundles by tying them together in braids of grain. Huge mixing containers beat up the dough before it is molded into the form of loaves and placed into gigantic ovens. We see thousands of loaves of bread being spewed out of the ovens into space. In short, the individuation of the first scenes is utterly transformed into collective abstraction, reiterating the theme, but also transforming this film from a simple realist tale into a wondrous cinematic spectacle of the abstract akin to the paintings of Russian artists such as Kasimir Malevich. 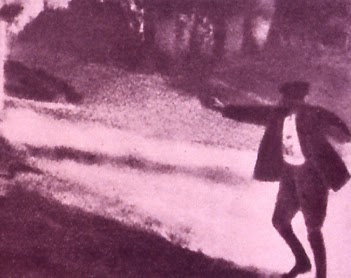 The hopak that Vasyl dances on his way home that evening is not simply a peasant dance, but a performance of graceful beauty that also suggests a kind of “dance of death,” as the director focuses on his white-bloused figure against the blackness of night, a figure who quite literally stirs up the dust of earth in his intricate footsteps, whirling like a dervish into destruction. He has, after all, dared to threaten in his very devotion to idealism, the ancient way of Ukrainian life. And although he is certainly a hero, he is also a fool in his impulsive rush into the future. 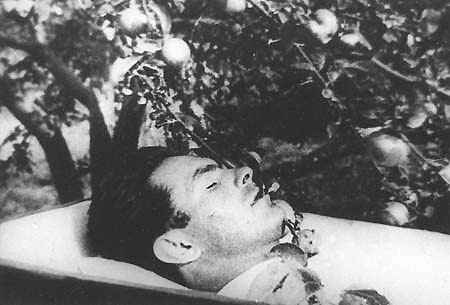 His celebratory funeral is interspersed with a fantastic triptych: the local priest calling down god’s wrath upon the now atheist community, an anguished naked pledge of love by Vasyl’s girlfriend, and the increasingly mad run of Khoma, attempting to speed away from both the masses and himself, a rush that ends in the graveyard, where he too dances out a kind invocation to death and screams out his guilt to the world, with no one there to hear him. Dovzhenko portrays him in his silent film as one of the most lonely beings on the planet, a man who cannot even find someone to whom he can confess.

Once more the earth is stirred up into dust, while Vasyl’s mother bears another baby. 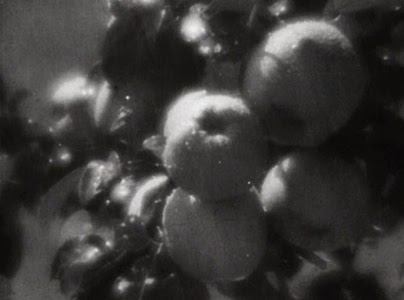 In the final scene the rains gather, pouring down upon the rich landscape, dripping seemingly endlessly across the surfaces of pears, apples, melons and other fruits, which in the director’s hands become another kind of abstract representation of nature. And, in the end, Dovzhenko’s film seems more concerned with the cycles of nature and human life and death than the political fable at its core. Daily life matters in Earth far more than the political fissures and bonds of social structures. The individual and their eccentricities seem of far greater worth than the abstractions of a collective living. If nothing else, Dovzhenko gives them equal value in his idyllic testament to the Ukrainian way of life.
By coincidence (my old friend) Network sent me this film on the very days when the modern Ukraine was rebelling against their President’s attempt to realign their country with the Russia. You certainly do perceive in The Earth the importance of the Ukraine to the former Soviet Union. It seems almost eerie to realize that most of the work was filmed in and near Kiev, where just yesterday fires were blazing in protest of the alignment which Dovzhenko’s kulaks also fought.
*In Earth’s continual series of friezes, we can perceive the film’s later influence on other Soviet filmmakers, including the Armenian director Sergei Paradjanov.

Posted by greenintegerblog at 9:31 AM