where you gonna run to?
by Douglas Messerli

Hugo Butler and Luis Buñuel (screenplay, based on a story by Peter Matthiessen), Luis Buñuel (director) La Joven (The Young) / 1960, USA 1961.
Spanish-Mexican director Luis Buñuel’s second and last English-language film, La Joven, is generally perceived as a pallid and failed film, and one might well agree that, for the most part, it does seem to be an atypical Buñuel product, having none of his signature surrealist-based flourishes. Perhaps, given the film’s various subject matters—racism, pedophilia, false claims of rape, and moral lassitude—all played out on a small Carolina island in the American south, that he need present no more of an exaggerated or unsettling world view. 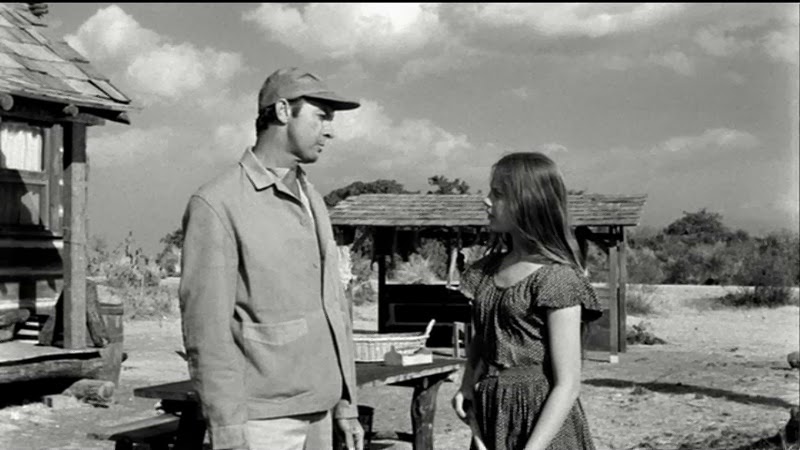 The marvel of this small film—and the film is, to my way of thinking, far superior to how it was seen by the critics and audiences of its day—is that it presents these issues in the US context in a way that few other films of its day could manage. True, during the shooting of the film in 1960, a film with similar concerns, Stanley Kramer’s The Defiant Ones appeared. But Kramer’s work, although notable for pairing (quite literally with handcuffs) a racist (Tony Curtis) and a Black man (Sidney Poitier), was also far more in the Hollywood mode, declaring its liberal sentiments on its sleeve. Buñuel’s work is far more nuanced and troubling for that very reason. The director and film, although they clearly have a strong point of view, present their various characters with great subtlety, refusing to outright judge them.
At the center of La Joven—or perhaps I should say, at one of its centers, since the work ultimately ripples out in a series of interrelated rings of hell—is a Black musician, Traver (Bernie Hamilton), who has been accused of rape on the mainland by an elderly woman. Given that the clarinetist is a Black and Northerner, is surely danger of being lynched, and, understandably, escapes by stealing a boat and beaching it on an isolated island. In the original Peter Matthiessen story, the character was a man with a long criminal record with periods of his life being spent in jail. Traver in Buñuel’s tale, however, is guilty of only stealing the boat and going on the run, similarly to the character in To Kill a Mockingbird. But as the song of the movie’s pared-down music track asks” “Where You Gonna Run To?” The place Traver has selected is fraught with perhaps far more dangerous people than even the mainland. 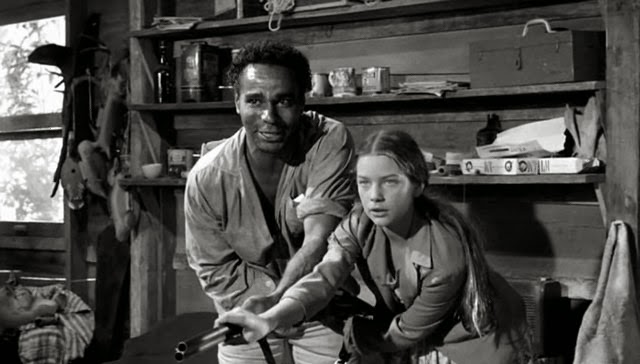 The man who controls this small island, Miller (Zachary Scott) is a rough and tough bee keeper, whose alcoholic partner, Pee Wee, has died moments before the story begins, leaving his wild and innocent daughter, Evelyn (Key Meersman) under his tutelage. For years apparently he has already been abusing her by forcing her to keep his house and work in the aviary; but now that he suddenly is forced to become her surrogate father, he also suddenly perceives her nubile adolescence, demanding suddenly that she scrub up and tie her wild hair back. When she bows to his demands, he almost immediately goes on the attack, attempting to kiss her, seating her on his lap and toying with her near complete innocence: warning her to never allow a man to do what he doing to her at that very moment. This first time she escapes his unwanted embraces; and he determines to go into town to pick up provisions and new clothing in order to woo her.
In his absence the musician appears, asking her for honey (the product of their aviary, not her body) and paying her as he steals Miller’s guns. Although she is at first somewhat frightened of the stranger’s appearance, we quickly wins her friendship, which sets up a relationship far different from Evvie’s and Miller’s. Traver makes no advances and pays her for what he takes. But Traver is also another kind “joven,” a greenhorn who before he can even set off in his small boat for another, safer place, accidently shoots a hole in the craft, and is forced to return to the house to find tools and tar with which to fix it. It takes time for the repairs and before he can finish the task Miller has returned with a new dress and shoes for his would-be young lover, discovering as he awards the gifts that there is a now a stranger on the island and that he has paid Evvie for “something,” presuming it must have been sex. Yet, despite Miller’s determination to find and ill the stranger, he is not the stereotype that other directors have presented him as. When he finally encounters Traver, he and the Black man—in part because of the clarinetist’s odd courage and straight forwardness, and, in particular, because of their shared experiences as soldiers in World War II—the two reach a kind of impossible truce, with Traver returning the guns and Miller giving him his former partner’s house in which to sleep—which at the same time gives him the opportunity to bring Evvie into his house. It is apparent that after this night Evvie is no longer a virgin. 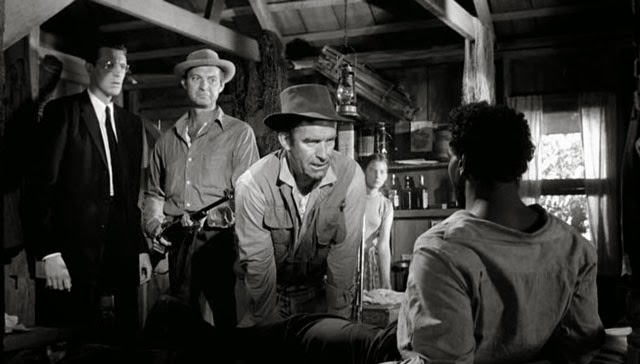 Still, she remains incredulous that the two men cannot simply get along, growing increasingly fond of Traver. A rationalist, Traver explains it to her in a way that takes this Black character into completely new territory, a world in which goodness simply is not a match for hate: “It’s easy for him to kill be,” he tells Evvie, “It’s hard for me to kill him.” His recognition of the Black-white dynamic is devastating, and perhaps explains his salvation.
All changes, however, with the arrival on the island of an all-out bigot, Jackson, determined to once again track down the elusive Traver and kill him. Indeed in the original version of the script, as in the original story, Jackson does kill Traver in a knife fight, in which Traver once again proclaims his recognition of the world in which he lives—so different yet so connected with, for example, the vision of writer Richard Wright—“He supposed he could kill a white man if he had to, and a white man could kill him. But a black man did not kill a white man.” In Buñuel’s editing of his film, however, Traver survives, and is allowed to escape through Miller’s and Revered Fleetwood (Claudio Brook’s) intervention.
It is less a moral “intervention,” however than, what the 1993 article in Cineaste correctly describes as a “bargin,” truly a bargin with the Devil, as the weak Fleetwood, who has come to the island to baptize Evvie, begins to hear both Traver’s and the child’s story, realizing that the white woman has accused others of having raped her and that, in fact, Miller, has actually raped the girl. Miller and Fleetwood allow Traver to escape only to further protect Miller, who now promises to Mary his “daughter.”
No one in this complex work, finally, gets off easily. Each of the figures carry with them the guilt of their own blindness and lust, which “the young” can only suffer or attempt to escape. And even that act, escape, as the director suggests, is only a temporary event. “Where you gonna run to” in a society that is so corrupt?
That Buñuel’s film was written and shot by so many former Hollywood artists who had been blacklisted in the hysteria of the 1950s notions of Communist conspiracies, makes this question even more poignant. The film, denounced by New York Times critic Bosley Crowther—one of my least favorite commentators on film of all time—only points up the fact that a significant film like Buñuel’s La Joven could only be made outside the US, in this case Mexico, and reiterates my feeling that the early 1960s were, in the USA, even more conservative than many of the years of the previous decade (see My Year 2005, My Year 2008 and other volumes of this series).