the coat makes the man

René Clair (screenplay, based on a play by Georges Berr and Marcel Guillemand, and director) Le Million / 1931


The major “figure” in René Clair’s delightful comedy, Le Million, is not a human but, as in the Gogol short story, a coat, this a threadbare suit coat. Within its pockets lies a winning lottery ticket owned by Michel Bouflette (René Lefèvre) who is busy with another woman, when his girlfriend, Beatrice (Annabella), takes it away to mend. When she discovers her lover with  another woman she gives she passes on the coat to a visiting criminal on the run from the police, a chase scene that includes nearly all the tenants of building, that ends with the thief, Granpere Tulip (Paul Ollivier) hiding out in her room. If my description seems to make little sense, so does the film, upon retelling, become more and more outlandish. For Clair’s work does not simply involve several Keystone Kop like chases, inexplicable characters such as Tulip and his “gang” of thieves, an artist-friend of Bouflette’s, Prosper (Jean-Louis Allibert) who betrays his friend, a haughty opera tenor who later purchases the coat to wear in a production of The Bohemians, an opera-stage battle similar to that of the Marx Brothers’ A Night at the Opera of a few years later, but the work is musical that even sings of the moral conditions of its characters, particularly of Prosper. In short, to make logical sense of the antic events of the plot would be senseless. Clair’s work demands that the viewer, as in the later Marx Brothers’ work, let go of all reason and sit back and laugh at the insanity portrayed. With nearly everyone on the chase for the coat and its lottery ticket, characters come and go, in and out of rooms, with the swiftness of subway turnstile. Women seduce men, men seduce women; ballet dancers prance into operas that contain no dances, gangsters join singers upon the stage (as in Porter’s Kiss Me Kate), and taxi cab drivers join up with butchers, grocers, bartenders, and renters to get their part of “le million” the lottery ticket offers its rightful owner. If Tulip is a criminal, he is also the philandering hero’s savior, producing the missing lottery ticket when it appears all is lost, an act that sends everyone into a long line of absurdly merry dancing. Whether, after paying off all those he owes, Bouflette will have any money left to live on is questionable. Does it matter? Everybody wins in this trifle of a film, which proves that the coat makes the man! 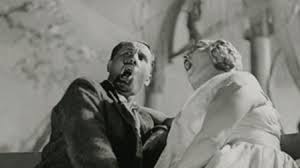 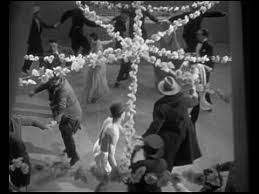 For all of its light merriment, however, Clair’s frothy confection, in the end, seems fairly empty. Money is at the center of everything, and even though the picture’s end returns the central character to his “true” lover, shows up the self-inflated tenor and his gargantuan soprano as snobbish fools, and permits everyone to escape the clutches of the power-hungry police, variations of greed still seems to be at the heart of this phantasmagoric fable. And this Beatrice spends more time leading her Dante astray than into the sublime. As the two interlopers who begin this movie look down into the frenzied cast of characters twining through the rooms below, the audience also can only feel a bit like the outsiders observing the fun that will result, surely, in one grand hangover.