how long is a day?


Director Stanley Kramer, it is safe to say, was never known for his subtlety. Throughout his career he made pictures, most of them with underlying liberal themes, that out rightly depicted battles between good and evil concerning racism, holocaust (both the Nazi murder of Jews and nuclear holocaust), intellectual freedom, and moral antipathy. He may not have always explored the complexities of good and evil, but watching his films you certainly knew on which side he stood. 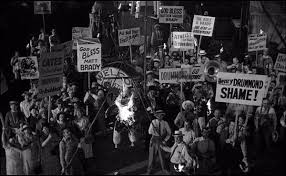 One of Kramer’s most respected films, Inherit the Wind was based on the highly acclaimed play by Jerome Lawrence and Robert E. Lee that presented a fictionalized version of the true-life trial in which a small-town Tennessee teacher, John T. Scopes, was arrested for teaching Darwin’s Theory of Evolution in a state that had voted that it was illegal to teach anything but Creationism. The great lawyer, Clarence Darrow, procured by the Baltimore Sun journalist H. L. Mencken, argued for Scopes, while the famed three-time presidential candidate, William Jennings Bryan, argued for the state. Using different names for each of these now-renowned figures (Scopes was renamed Bertram Kates [played by Dick York], Mencken was called E. K. Hornbeck [played against type by Gene Kelly], Darrow became Henry Drummond [Spencer Tracy], and Bryan was named Matthew Harrison Brady [Fredric March]) as a kind of fable to attack the “kind of mind control,” argued Lawrence in a later interview, of McCarthyism. “It’s not about science versus religion. It’s about the right to think.”

To reiterate their concerns, the original playwrights added a romantic interest in the form of Scopes’ girlfriend Rachel Brown (Donna Anderson), and her firebrand, bigot father, Rev. Jeremiah Brown (played by Claude Akins). In order to further humanize the great liberal Darrow, Lawrence and Lee hinted at a deep friendship between the Darrow and Brady figures, particularly between Brady’s forebearing wife Sara (Florence Eldridge) and Darrow. And to counteract some of the gentility of Darrow, the writers allowed their Mencken figure to spout a series of witty and cynical one-liners that might almost remind one, at moments, of a Americanized Oscar Wilde. (Hillsboro is described by Hornbeck as “The buckle on the Bible belt, and his role is, as he puts it, “To afflict the comfortable, and comfort the afflicted”) In short, the Lawrence and Lee work was an old-fashioned, slightly creaky well-made play that lasted for a long-running 806 performances after its 1955 Broadway opening. 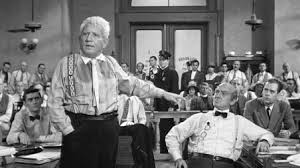 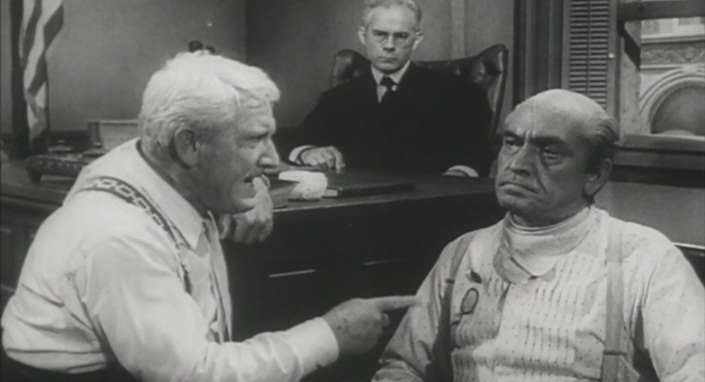 Kramer, true to his directorial limits, makes little attempt to open up the play to the cinematic world of time and space. Although he certainly does bring to the screen a more realistic depiction of the circus atmosphere that the trial created for its small Hillsboro, Tennessee town, most of the festivities that surround the event might have been successfully staged—except perhaps for the long and emphatically enacted religious parade, where choruses of Christian women stridently march through streets singing what seems like ninety choruses of “Give Me That Old Time Religion,” many of them bearing banners denouncing Drummond. In truth the small southern town, according to many reports, although obviously supporting the religious values of Brady, were equally welcoming to Darrow and Mencken.


Although he may have been a top-rate film cutter, Kramer’s major cinematic technique is to set up the camera facing the action head-on or at a slightly skewed angle that allows more actors into his frame. And generally the director seems to have nailed together scenes rather than sequencing them in the processor. Fortunately, once the characters enter the courtroom, overseen by the seemingly kindly but blinded justice of Judge Mel Coffey (Harry Morgan), things vastly improve, primarily because of the great acting abilities—supported by the gentle manipulations of the plot—of Spencer Tracy and Fredric March. If, in between, we must endure the pious hosannas and damnations of Claude Atkins and the gee-shucks, head down humilities of Dick York, the electric sparks fly the moment Tracy and March sweat out their intellectual match. While Brady may be the better orator, speaking always in a kind of biblical oratory that sounds right even if it doesn’t make sense, Drummond, by far, is the better tactician, summing up his opponent to his own wife: “He would not have made a great president, but he would have been a wonderful king.” Refused the right to bring in outside scholars who might support Darwin, refused to be able to quote from Darwin’s book, Drummond makes it clear that there is only one thinking man in town, the man under arrest. In real-life, Scopes was never even arrested, but the film, is in fact, is about arrestment, less the arrestment of the body than of the mind. When Brady, in a friendly moment, ponders “Funny hwow to people can start at the same place and move apart,” Drummond counters “Maybe it’s you who have moved away by standing still.” Although the judge insists that “the right to think is not what is on trial here,” Kramer makes it very clear that that is precisely at the very center of the issue, that a “grid of morality” has been placed upon behavior, something made even more evident in more recent times with the continued demand in schools throughout the country that if evolution is taught, so too must be Creationism, as if these two complete contradictory views of the universe were to be given equal credence.


In a brilliant maneuver, which, in fact, Darrow actually used in the real trial, Drummond calls Brady to testify about the creation of the universe, wryly forcing him to insist that the earth was created, as Bishop Usher declared, “precisely at 9 a.m. on October 23, 4004 B.C.,” thus disavowing the existence of nearly all of our fossil history and scientific fact, which Drummond has already posited as “irrefutable as geometry.” If he does not win the case—Scopes losses and is fined $100—he has won the cause by showing everyone just what a fool Brady is. Simple questions such as “how long is a day?” as described in the Bible, become deep traps of intellectual uncertainty, of which the close-minded Brady reveals, even to the seemingly uneducated citizens of Hillsboro, he is ignorant. Outraged by the small fine and lack of punishment for Scopes (in truth, Scopes received no fine, and Bryan had agreed to pay any fine accessed from the beginning) Brady attempts another blustery speech; but this time there is no one left to hear him, and outraged he falls into babble, simply listing the books in the Bible in their order, a school-boy exercise of a religious upbringing.*


In truth, Bryan died a few days later in his sleep; on stage and in Kramer’s stage-bound film, he dies in the courtroom of a ruptured stomach, a simple wrap-up of a more complex life, Drummond reaching for both the Bible and Darwin’s book, carries them out of the courtroom as if he can live equally comfortable with opposing philosophies. But it is Horbeck’s cynicism that, finally seems to win out, as he asks: “How do write an obituary for man who has been dead for 30 years?” By using the usually loveable, dance man Kelly in this role, Kramer has shown, perhaps, his real genius, forcing the audience into a kind of love-hate relationship with this enigmatic journalist. Yet Drummond, in his ability to see things through an historical lens, truly wins out: “A giant once lived in that body,” he proclaims, redeeming, perhaps the fanatical monster we have just witnessed, and, finally, adding a slightly more complex layering to this historical fable.

*In my childhood we attended a Lutheran church in rural Iowa, and I recall the older Sunday School-going students reciting the books of the Bible in just such a manner, the one who could name them all most quickly winning the ridiculous contents. Even as a child, I simply could comprehend what madly naming the books of the Bible might mean about comprehending them or even having read them. My childish mind simply could not assimilate the value of this empty exercise.