the power of life and death

The time is the early 17th century in Denmark, where the church is busy, as it has been throughout the world, accusing elderly busybody housewives and young women of the whom the community women are jealous of witchcraft. Witchcraft can be claimed, evidently, for almost any inexplicable occurrence in this time of superstition and community small-mindedness. An older woman such as Herlof’s Marte (Anna Svierkier) can be seen in league with the Devil merely by speaking evilly of a friend or neighbor, particularly if she might wish that woman’s death. Once one has been accused, moreover, there is little one can do to defend oneself, particularly in an uneducated community where the women themselves may believe they are guilty just for perceiving their unsocial tendencies. Certainly Marte might be described as that, a woman who in the very first scene is represented as cooking up herbs gathered from below the gallows that might do harm to others or protect oneself. For once one is proclaimed a witch the major proof is through torture, in which the accused, in terror for pain the eminent death, often admits to crimes she has not committed.

Women like Marte, however, are not stupid, and she perceives her best way out of being accused of witchcraft is not denial but gaining the protection the church elder, Absalon Pedersson (Thorkild Roose), who protected another woman—the mother of his second wife, the young Anne (Lisbeth Movin)—from charges of having the power over others of life and death. His motives, as he takes the young girl to marriage without even consulting her, are certainly questionable, and perhaps more evil than anything either woman was connected with, particularly since the elderly pastor did not even seek that Anne love him and that he truly loved her, determining merely to marry her because of her lovely, pure and innocent, eyes, which Marte describes as being full of fire, like her mother’s.

The gamble on Marte’s part does not work; although Pedersson has saved Anne’s mother, who is now dead, he is not willing to intercede in Marte’s trial; despite her pleas, to which he turns a dead ear, he agrees to meet with her, only to make certain that she does not reveal his connection to Anne’s mother. Terrorized of both torture and death, Marte, however, keeps her silence, while Pedersson’s guilt leaves his mind open to Godly accusations. Perhaps he knows that on the Day of Wrath, it is he and Marte or Anne’s mother who must face Christ’s judgment for his evil acts.


His wife, Anne, trapped in a household where she finds little love from her husband and discovers absolute hate from his elderly, domineering mother, Meret, overhears the statements about her mother with great interest. In a world in which women have utterly no power, might she, like her mother, be secretly able to wield power even over life and death in men?


Certainly, Marte, as she is thrown upon the burning pyre believes she has that power, damning a younger pastor, Laurentius (Olaf Ussing) to an early death, and cursing the young Anne to a scandalous relationship with Pederrson’s son, Martin (Preben Lerdorff Rye), a boy who has just returned home from his schooling, which will destroy his father.

Upon seeing one another, the two, in fact, do fall immediately in love with one another and quickly begin a sensual relationship that, in this film of dark and irrational pessimism, stands out through Dreyer’s depiction of the lovers sleeping among the grasses, lounging under apple trees, and luxuriously floating down the farm’s hidden waterways on low rowing boats. If being in league with the Devil can help one to control the lives of others, so Anne discovers, just being a beautiful young girl with a man falls in love can permit her a power beyond anything which she has previously imagined. Indeed, it is not hate that allows her to control other lives, but natural love, a love unfouled by the bedsheets of dirty old men like her husband who give nothing in return. Is it any wonder, as Anne soon confesses to her lover, that she sometimes imagines the death of her husband, a death allowed through the hand of God to allow her and Martin to establish a truer and purer relationship.


But in this closed society, even an educated man like Martin is subject to irrational fears, to the belief that in his loving the beautiful Anne he is simultaneously sinning again his father. In terms of that society, of course, he truly creating a scandal, as his grandmother describes nearly everything outside of her narrow focus. No matter that the society itself has created a perverse and unnatural world in which they live! 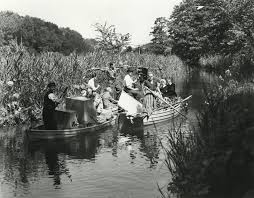 Dreyer’s powerful film of dichotomies explodes on the night when Pederrson is called out into the night to administer the last rites to the dying Laurentius. A fierce storm is brewing in the landscape, symbolizing the inner storms suddenly facing Martin for the guilt he feels in having made love to his own mother, and the rising flush of hatred and scorn of Anne by Pederrson’s unforgiving mother. As Anne admits to Martin her desires for him and her wishes that Pederrson might die, freeing them to their own predilections, the pastor, returning home suddenly feels the hand of death upon his neck, and returns home to discover his son and wife sitting up in which her assumes is their wait for him.


In cowardice, Martin retires to bed, while Pederrson, describing what he has just felt, queries her about her feelings for him. He admits that he has never considered her own desires in the whole matter, but still expects her reassurances of love. When, instead, through her bitterness of the way he has destroyed her youth, she lashes out in honesty, the old man screams out in horror, falls to the floor in what appears to me a heart-attack or stroke; since throughout Pederrson has shown little evidence of a heart, we have to presume it is the latter, perhaps a “day of wrath”-like stroke from hand of God himself. 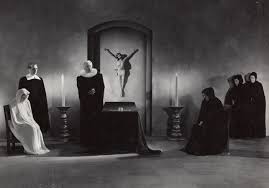 With the cry, both grandmother and grandson come running to discover Pederrson dead. In his now absolute sorrow for his own behavior, Martin rejects further communication with Anne; yet, as he sits in watch over the body, agrees with Anne to protect her from being proclaimed a witch by Marte.


At the funeral, with all members of the family clad in black, accept Anne, draped in white Pederrson asks for forgiveness for his unstated acts, yet proclaiming that no one, in the end, has been responsible for his father’s death When he has finished, however, Merte stands to accuse Anne as being a witch, and Martin, weaker than even the audience might have expected, joins his grand-mother. The head past now has no choice but to ask Anne to defend herself over the casket itself.


Certainly, we have seen her capable of that; she has previously defended her wish for her husband’s death as conditional, never a direct intention, over the dead man’s body and bible, in order to convince Martin. But just as she is about to argue her innocent, we see that Martin’s cowardice has so completely unnerved her that she cannot go forward: there is no longer anyone there to wipe away her tears, she argues. Any power of life and death that she might have imagined for herself has disappeared. Without love, death is the only alternative, and she invites herself into Death’s arms by the logical admissions of desiring the end of her abusive husband’s life. This is a society that permits no allowance for women, for the weak, for the poor. Only the strong of faith and self-aggrandizement easily survive. And Dreyer’s great psychological study ends with what we know will be her body on the burning pyre.


When Dreyer’s film was first show in theaters both in Denmark and England, critics found its bleak message nearly unbearable, and criticized the work on just that account. Many viewers, moreover, saw the film as a kind metaphor for the political events of the day, particularly German Nazism and the Holocaust. Dreyer denied those parallels, but did feel it was prudent, given these interpretations, to leave his country for the neutral Sweden for much of the rest of World War II.


In fact, the solemn dictates of the old men of this Danish community, as ugly and harsh as they are, might be seen far more sensible and tamer—particularly given the these men’s own spiritual doubts and fears—that anything the Nazi’s did, and particularly the attempted extermination of an entire religion and ethnicity. Dreyer’s world may be a miserably dictatorial and immoral world, but those destroyed are not masses of human beings, and the comparison, is accordingly, a weak one, which diminishes the tragedy of the 20th century.


I would rather see Dreyer’s work as a brilliant proto-feminist work that argues for education and knowledge over superstition and paternal dominance. If the elders of Dreyer’s Day of Wrath control the lives of their closed society, that control is ultimately laughable since they too must face the Dies Irae. Surely the Nazi’s never imagined facing an eerily terrifying “day of wrath”


David and the Sibyl!

How much tremor there will be,


When the Judge will come,