The death on April 6, 2014 of actor Mickey Rooney, led me to quickly order one of his early films, A Midsummer Night’s Dream, which I had never before seen. Rooney’s performance in this work was certainly quite remarkable, particularly given the fact he was only 15 when he played this role, although he had already performed in numerous films beginning at 7 years old.

the sounds of laughter

The 1935 Hollywood extravaganza of Shakespeare’s A Midsummer Night’s Dream has to be seen to be believed and even then is almost a surreal landscape. One might argue that the film is completely watchable because of the strange mix of high and low art, brilliant and truly bad acting, and its often stunningly beautiful and just as often kitsch costumes and sets. The film is sort of like the grand train wreck of Cecil DeMille’s The Greatest Show on Earth: horrifyingly beautiful, a terrible event from which one cannot remove one’s eyes even for a moment. 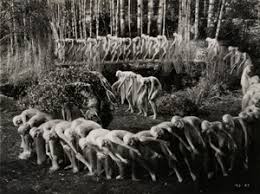 The movie came into being when German-born Hollywood director William Dieterle convinced Warner Brother studios to film the play that the great German director Max Reinhardt had performed at the Hollywood Bowl the year before. Dieterle, who had once worked in theater with Reinhardt, was a far more pedestrian artist than was Reinhardt, but had long before proven to the studios that he could make successful films.

The Reinhardt production, which had used Hollywood actors, also employed the music created by Felix Mendelssohn to celebrate the Shakespeare work, and then re-orchestrated it by the Hollywood musical composer Erich Wolfgang Korngold. Large balletic works were choreographed by Bronislava Nijinska, sister to the great dancer Vaslav Nijinsky, both of whom danced at the Ballets Russes. From the studio’s players, the directors chose credible actors such as Olivia de Havilland as Hermia, Ian Hunter as Theseus, Verree Teasdale as Hippolyta, and Jean Muir as Helena, but combined them with popular stars, many of whom had never performed Shakespeare and would never again. For the important role of Lysander, the film chose popular crooner and later gumshoe Dick Powell, Bottom was Jimmy Cagney, and Joe E. Brown was Flute. Certainly the “rude mechanicals” are very, very funny, but, at moments, they seem to be enacting a Laurel and Hardy short or even a piece by the Three Stooges in the middle of the grand court of Shakespeare’s drama. Powell, even commenting himself that he was ill cast, seems at moments to have wandered into the grand settings from a Busby Berkeley act, a feeling slightly reinforced by the producer’s choice of a young Mickey Rooney to play the part of Puck. Later, of course, Rooney would also appear in Berkeley-directed musicals. The diffident air of Powell’s Lysander plays in near total opposition to Ross Alexander’s nervous and slightly effeminate Demetrius.* The serious posturings of Victor Jory’s King of the Fairies, Oberon, seem to work at odds with Anita Louise’s fringe covered Titania, and their bickering over the “changeling” boy, who they hug and kiss with increasing frequency, borders on something close to pedophilia. Years later, former child actor and gay experimental film director Kenneth Anger claimed to have played the changeling. But film records proclaim the role as actually played by Sheila Brown. Mickey Rooney claimed that it was, in fact, Anger, but that his mother dressed him up as a young girl, calling him/her Sheila Brown, which might explain some of Anger’s later cinematic interests. 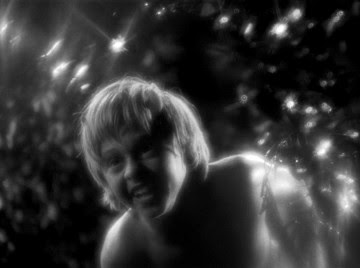 And then is the acting of Rooney himself, which some critics felt was filled overwrought cute and fetching grimaces. To my way of thinking, it is one of the most brilliant examples of child acting ever put upon the screen, as the blond-haired rapscallion races about the countryside cackling in clear mischievous intent. Rooney turns Puck into a feral being intent on spiting humans who cannot perceive the magical world about them. He mocks them, imitates their cries of love and anger, jumping about like an escaped baby ape, outshining nearly all the other elderly thespians in his utter enthusiasm in his role. Only the blow-hard Bottom, Cagney, can come close to Rooney’s marvelous transformation. Bottom, who was ready to act up a storm from the start—desiring as he does to play every role in the play of Pyramus and Thisbe—gets his opportunity as a hee-hawing ass so beloved by the drug-confused Titania. If Cagney is occasionally just too manic for the role, at other moments he is absolutely touching in his utter confusion and mystification about the world of the fairies.

Suddenly, is seeing this production, I realized again just how much “laughter”—friendly and unfriendly—matters in this Shakespeare play. Henri Bergson, in his study of Laughter, might almost have used this production as his major example. From the dark, almost evil chortles of Oberon to the open admission of the ridiculous of the court members watching the players’ inept performances, from the giggling chortles of Puck to Bottom’s heart-rending brays, A Midsummer Night’s Dream is almost a study in how we release our hostilities through the strange sounds we pour out of our lungs.


In the case of this film, relying as much as it does upon the tensions between cultural perspectives, of serious minded theater and something resembling camp humor, this film presents a dream world that takes us from the nightmare into the sublime that surely belongs as much to Freud as it does to the world of the fairies.


Posted by greenintegerblog at 10:46 AM