a poor house of artists
by Douglas Messerli


Although in the middle of the Federico Fellini-Alberto Lattuada directed film of 1950, Variety Lights, the central figure Cheeco Del Monte (Peppino De Felippo) suddenly encounters a world of poor artists who live on the streets of Rome or artists who spend their nights in “poor houses,” hotels where the poor sleep upright, locked into position by a wooden brace, the entire movie might be described as presenting a kind “house of poor artists”—artists who not only have little money but are poor performers, singers, dancers, and comedians showing very little talent playing night after night on the stages of small town Italian theaters before escaping, once again, the theater managers and others to whom they owe their salaries. Fellini’s film—and despite the co-direction of this movie, one would have to recognize it as a Fellini’s vision—portrays a whole world of delusional wanna-bes, figures, who have very little to offer, are convinced of their abilities to entertain and are enchanted with the flea-bitten theater companies that allow them the chance to strut their stuff. 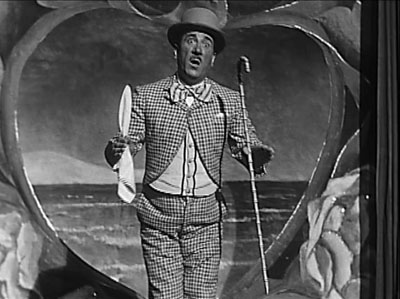 Like people everywhere, these individuals weigh themselves by their survival, venting jealousies, false pride, and their desires for love as if they belonged to a wealthy opera company instead of the backstreet popular venue, which even its unsophiscated audiences often mock. Fellini’s and Lattuado’s version of these rough-hewn pretenders is comic and, at times, sentimental; but one might imagine, had he simply pushed his sense of the absurd and exaggerated his types just a little further, he might have ended up with a film closer to Tod  Browning’s Freaks rather than to the darkly comic work he actually created. Characters such as Cheeco, Edison Will (Giulio Cali), some of the dancers, and even Liliana (Carla Del Poggio) may be dislikeable, but they ultimately find sympathy in the viewer’s eyes. They are not monsters, even if their behaviors might threaten to break out into violence and chaos. Checco’s new company, moreover—the one  hecreates in opposition to the tawdry side-show in which he have previously played--is peopled by far more likeable and innocent figures, particularly the quite talented American trumpet player Johnny (John Kitzmiller), the Gypsy street singer (Vanja Orico), and the gun slinging cowboy Pistolero Bill (Joseph Falleta). Even though this company fails even more than the previous company with whom he worked, there is something redeeming in their far greater-innocence, their devout poverty, and their unquestionable devotion to their arts. 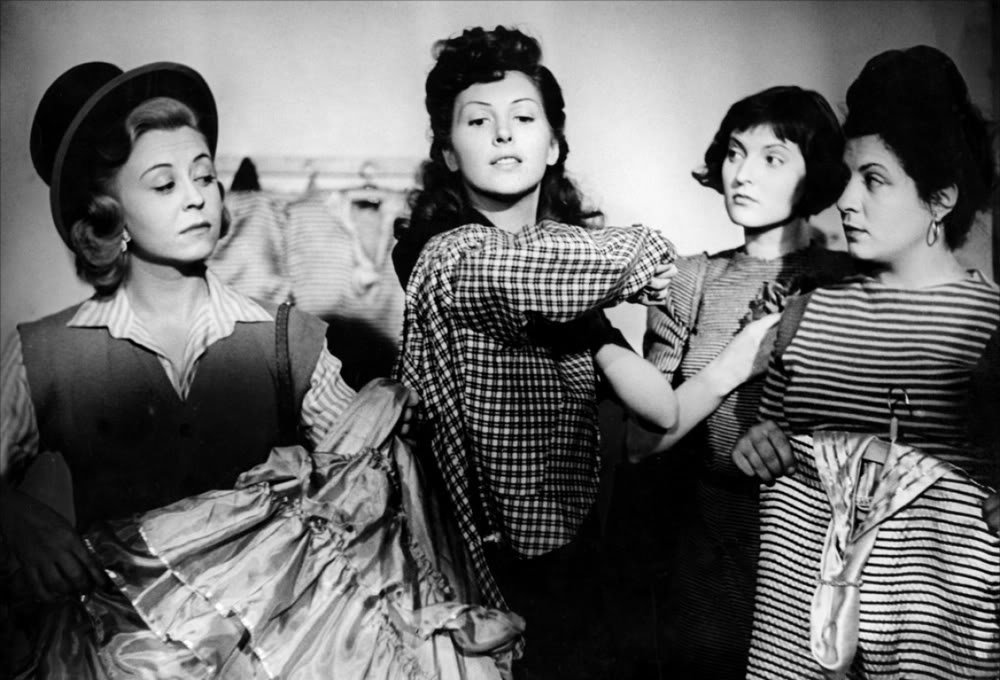 Although there are obvious connections between Variety Lights and later works such La strada and even 8 ½, I would suggest that this early film has far more in common with Fellini’s significant 1959 masterpiece, La Dolce Vita, two scenes in particular which predict the director’s satire of the Italian elite and their hangers-on. The one night that the often hungry and sleep-deprived acting troupe actually are invited to dinner and to spend the night in comfortable beds in the castle of a local Duke (Giacomo Furia) ends badly when, because they have interfered with the Duke’s sexual assault of Liliana, they are asked to leave; like the partiers at the castle of Roman aristocracy, the actors are forced to shuffle off into the sunrise like ghosts without a clear destination in their lives. Shortly after, at a upscale Roman nightclub, Fellini gives us a preview of the bacchanalian-like dancing and sexual coupling of Roman life, including the famed scene of men riding their women like animals while sitting upon their backs, featured in his later film. In many respects, Variety Lights represents a community not unlike the journalists and paparazzi of few years later—the only major difference being these poorer folk have a bit less imagination than their debauching brothers. But in that fact, in their simpleness, they are, perhaps, less destructive and more appealing that those who have reached the pinnacle of success these poor folk seek.

The final scenes of Fellini’s and Lattuada’s concoction reveal just this reality, as the now well-dressed, fur-covered Liliana, finally able to find success with a wealthy burlesque company on their way to Milan, encounters Checco and his company traveling in the opposite direction toward a small Italian village where they will perform that night. Checco is impressed by Liliana’s beauty and attire; she has clearly attained all of her dreams—or has she? We have witnessed her new role: her breast covered with pasties, she balances what seems to be an overweight drag-queen (or one of the ugliest women I’ve ever seen) singing her way down a staircase in a cheap imitation of the Follies Bergère. Frankly, I’d rather see Pistolaro Bill, the Brazilian singing gypsy, and Johnny the trumpeter any day over the kitschy burlesque routine which now pays her bills.

And Fellini appropriately ends his film with another train trip, as we tag along with Checco’s new-found friends, and, more importantly, his return to the arms of his beloved Melina Amour (Giulietta Masina), who he has previously abandoned for Liliana. Yet, while everything has changed for the untalented Liliana, nothing has changed, except the faces, in Checco’s company, as a new girl enters their train car, flirting with Checco as he flirts right back: great actor, director, agent Checco is a self-important fool who will never learn—perhaps for his own protection—who he really is. So if Liliana is blind to reality, so too, suggests the directors, is Checco. For those devoted to theater, only the few moments they stomp the stage floor has any truth.


Reprinted from International Cinema Review (May 2014).
Posted by greenintegerblog at 11:27 AM