a light in the sky
by Douglas Messerli


Despite my description of this film as being a “Romanization” of the US West, Percy Aldon’s comedy Bagdad Café begins in a kind of hell, a sad world in which the German couple visiting the U.S. Mojave desert play out the breakdown of their relationship before our eyes. The husband (Hans Stadbauer) is obviously a slob, a selfish man who is drunk in the middle of the desert. The wife, played brilliantly by Aldon’s earlier find, Marianne Sägebrecht—a plump, corseted woman who could only be found in Germany’s Bavaria—is frustrated by her husband’s boorish behavior, determining then and there to leave him, pulling her oversized suitcase from the trunk, and trudging ahead through the desert sands, as he goes spinning off down the highway. 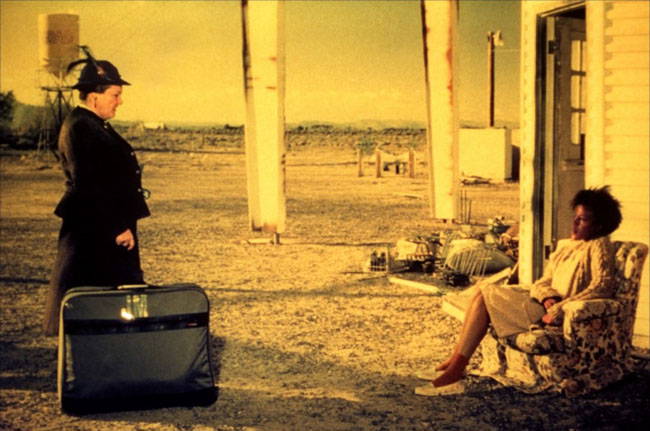 Miraculously, she finds her way to the only nearby stop, the Baghdad Café (in reality, the Sidewinder Café of Newberry Springs, California), where, greeting the scowling and unfriendly face of the Café-gasoline stop’s owner, Brenda (a spirited C. C. H. Pounder), who can hardly believe the sudden appearance of the overweight stranger, almost convinced that it is all a joke. Yet the German woman, Jasmin, offers payment in the form of traveler’s checks, and the transaction is culminated, not without some further doubts in Brenda’s unfathoming mind. It is not so much that the Black truckstop owner is bigoted as she is completely out of her element, having never encountered a figure such as Jasmin before in her life. Similarly, Jasmin, who has obviously encountered flew Blacks in her travels, is slightly terrified by the questioning sentinel who sits before her.

What we soon realize is that the two women, despite the vast outward differences between them, share a great deal of psychological baggage. Brenda is about to send her ineffectual, child-like husband off, whereafter she will be forced, as she has already been, to keep up the café, care for her beloved but dangerous adventuresome daughter and her piano-playing son’s baby. Although the café has few customers at the moment, the night time truck drivers who stop for dinner, along with the café’s long-term residents, the ex-Hollywood painter Rudi Cox (Jack Palance) and an S&M inclined tattoo artist, Debbie (Christine Kaufmann). Just as Jasmin—who quickly discovers that the suitcase she has pulled from the car trunk contains not her clothes, but her husband’s—Brenda is on the verge of a breakdown, which her husband, Sal (G. Smokey Campbell) recounts, as he watches her through binoculars, for the audience. Even little things irritate her, the new guest’s attention to her Bach-playing son, Salomo (the musically giften Darron Flagg), and Jasmin’s gentle friendship with Brenda’s daughter, Phyllis (Monica Calhoun). Finally, she explodes when she travels into town for a few hours for supplies, and Jasmin becomes determined to present her with a wonderful gift by completely cleaning up—and out—the mess of junk and paper that fills the chaotic gas-station office. Furious with the utter transformation, she demands that this German Hercules return all of her “shit” to this “Augean Stables.” The impossibility and ridiculousness of the task forces her to rethink her command as, with the compliments of passing customers and visitors, she suddenly is proud for the changes made in her life.

Gradually, the two women begin to bond, Jasmin helping to serve dinners and, eventually performing magic tricks she has learned from the magic kit purchased by her husband she has found in his suitcase. Their sleight-of-hand robberies of their customer’s pockets and even hair-dos, along with their song-laced shows, accompanied by Salomo, bring the truckers in by the dozens; for the first time in her life Brenda’s café begins to make money and bring her fame. The buxomly Jasmin, meanwhile catches the eye of Rudi, who insists that he must “paint her,” gradually stripping away her corsets and crude attire to reveal her fecund flesh. The arrival of a handsome young man, Eric (Alain S. Craig), who posting his tent on their property, draws the attentions of Phyllis all help to transform the isolated hellhole where the film begin into a lively outpost, a world so full of life that the negative-spirited Debby decides to decamp, insisting that the place has “too much harmony.”


Aldon’s film turns from a depiction of a dry desert spot to a world of glorious sunsets, stunning neon displays and strange displays of light in the sky, some of these captured by the painter earlier in his stay (something similar to what had greeted the Aldon’s, as I mention above, when they first visited this spot, long before the making of the film). Relying on his friend, film designer Bernt Capra, Aldon gets the sense of this lonely yet lovely world exactly right.

A visit from the local sherrif Arnie (native American Apesanahkwat) reveals that Jasmin’s visa has expired, and suddenly she is sent off from this rustic paradise to return to Germany. For a long period of the film, accordingly, things fall into stasis, as the sad citizens of this outpost are forced to simply wait day in and out, accompanied by the only sound to be heard, Eric’s boomerang, itself symbolic of the circular pattern of their days, but also, potentially, of return and resurrection. As the bartender Cahuenga (George Aguilar) tells truckers who ask “Where are the ladies?” “Everyone has gone. They’ve all gone.” 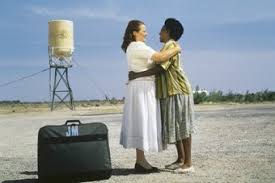 Unfortunately, when Jasmin does finally return and the two women ceremonially hug in slow motion (one of the weakest moments of the film) in what is clearly now a fully developed commitment to sharing life, the movie, which has made nearly all its statements, turns highly sentimental, replaying the festive performances from earlier on, with even the local truckers (Gary Lee Davis and Ray Young) singing and dancing. On a particularly windy morning, Rudi knocks on Jasmin’s door as, within, she pretends to redress for modesty, before appearing in the nightgown in which she was first dressed. Entering her room, Rudi proposes marriage to the Bavarian woman, who insists that she will “talk it over” with Brenda, which we recognize will end in a marriage that will make certain that Jasmin will never be forced to leave again. We may not be overwhelmed by the melodramatic series of tropes played out in these last scenes, but we cannot dismiss the interlinking wail of Calliope’s performance of Bob Telson’s song, “Calling You,” a song so primal that the relationship between the characters of this film ultimately does seem pre-determined if not predestined.


If Bagdad Café is highly unbelievable, it is a highly satisfying romance, a genre played out in the movie’s entertainments of being robbed only to have all the possessions returned again.


Reprinted from International Cinema Review (May 2014).
Posted by greenintegerblog at 11:39 AM