The great Columbian writer Gabriel García Márquez died on April 17 of this year. The importance of García Márquez’s fictions determined that I must write something about him in 2014 memoirs, and in preparation for an essay, I began rereading his work, Love in the Time Cholera. My own “disease,—if you can call arthritis a disease—intervened as I was hospitalized for knee replacement. Those few days, which interrupted my reading patterns, along with other review assignments I received from the magazine Nth Position, distracted me from continuing. And, as much as I originally loved his absolutely exemplary novel One Hundred Years of Solitude, which I read the year it was first published, in 1967, I simply didn’t have the “one hundred years” of energy it seemed to require on revisting that masterpiece.


To be honest, despite my recognition of this author’s significance to 20th century writing, I feel his works exemplify a kind of world construct of hierarchical values embedded in the notion of realism, even in its “magical” variations, to which I am no longer thoroughly attracted.  García Márquez is an ultimate storyteller, but his stories do not always represent a reality which I can completely swallow.


Recently, however, I have been attending to the films of Mexican film director Arturo Ripstein, and when I realized that he had created a cinematic version of the Columbian’s novella, No One Writes to the Colonel, I was immediately convinced that writing on that work might better serve as my appreciation of great writer, particular since this tale had few of the qualities of “magical realism,” suggesting a somewhat more genuine—to my way thinking at least—observation of human behavior.

everything is as it was

Paz Alicia Garciadiego (based on the novella by Gabriel García Márquez), Arturo Ripstein (director) El Colonel no tiene quein le escriba (No One Writes to the Colonel) / 1999


Almost from the very beginning of Arturo Ripstein’s highly moving film version of Gabriel Garcła Márquez’s No One Writes to the Colonel, we perceive the small, sleepy town in which Colonel (Fernando Luján) lives lies in near stasis. Certainly the lives of the Colonel and his wife, Lola (Marisa Paredes), have lived in the world of the past since the murder of their beloved son, Agustin. Even their clock throughout the early part of the work is broken, and after it is repaired, they are forced to sell it. Having put his house into mortgage in order to pay for a proper burial for his son, the Colonel and his wife, moreover, have survived with practically nothing to eat, both of them lying to each other about having already eaten or being unable to consume anything, in the wife’s case, due to asthma.


The Colonel, moreover, lives still in the world of his youth, during which he fought, along with the Communists, in the Cristeros War (La Cristiada), the 1917 Mexican battles waged against the clerics by then Mexican President Plutarco Elłas Calles in his struggle to help peasants to gain property rights, a revolution which the Catholic Church had opposed. Thousands were killed in the 10 year persecution of Church and its believers.


By the time we meet the Colonel in the 1940s, the war and its results are a thing of the past, with the clerics returned to power and, much to the Colonel’s dismay, allowed openly to pray and to bless their parishioners publically. In the smuggled, evidently illegal, newspapers that the town’s openly gay doctor (Odiseo Bichir) passes on to the Colonel, the old man has read that all former soldiers will be paid a pension consisting of a percentage of their former wages— money, quite obviously, which he and Lola are desperate to obtain. But over the 21-year period since this declaration, despite the Colonel having written the central government, no money has arrived.  The title proclaims the reality that the Colonel, in his weekly strolls to dock to wait the arrival of the mail-boat, does not truly want to admit—although the whole town painfully witnesses his increasingly desperate disappointment. Reading the news from the city, the Colonel admits a kind of defeat in his recognition that “Everything is as it was.”

Although his loving wife certainly knows that the money will never arrive, she, in a kind of tacit compact with her husband and his ideals, keeps hoping for a miracle, hiding the fact that the debtors are soon to evict them if their mortgage remains unpaid. The wonder of this work is that, unlike so many of García Márquez’s writings, there is no “magic” at work in their lives. The only thing of value they hold—other than each other’s sometimes begrudging love—is “Blondie,” a fighting cock once owned by their son, and the cause, so they are told, of his murder by a local carnival worker, Nogales (Daniel Giménez Cacho), who also shared with Agustin the love of the local prostitute, Julia (Selma Hayek). There are figures who, knowing of the Colonel and his wife’s situation, try to help, including the owner of a local market (who kindness is defied by her daughter’s insistence that Lola pay for anything she would like) and even the prostitute Julia, who buys a few provisions just to help Lola and her husband survive. But the destitute couple is too proud to even accept these insignificant provisions. We know from the outset, alas, that this elderly couple cannot survive, and much as in Michael Haneke’s 2012 Amour, they have only their love to temporarily sustain them. And knowing that, we see their brave attempts to survive a bit longer—the Coronel’s painful sale of “Blondie” to his corrupt former comrade in battle, Don Sabas (Ernesto Yáñez), Lola’s sale of her wedding ring to the local priest whose major community activity seems to be attending the weekly movies, and their symbolic sale to a German of time itself, in their temporarily restored clock—hardly matter; even the director and his writer, at times, seem to forget the results of these demands and sacrifices (Did the sale of her ring pay for the mortgage? Did the agents back off their attempts to evict the couple?), particularly given the fact that the Colonel, missing the fighting cock, buys it back with the intent to put it into competition.

In a sense, it doesn’t truly matter, for the important thing is that this couple stands, in their steady love, against almost everyone else in their community—including the kindly figures of Julia, who claims that she cannot feel love, and the doctor, who leaves wife at home in his search for sexual satisfaction with local young men. In two instances, moreover, the Colonel proves that if the world around him has not changed, his knowledge and actions represent a moral shift that some few (particularly Julia and the village children) witness. Although everyone believes that Agustin has died for the love of a woman, stabbed to death in a fighting-cock ring, the Colonel gradually comes to comprehend that a banned underground newspaper his son had hidden beneath his shirt has become transferred to his skin through the moisture always present in this forever rainy village and the sweat of the event; revealed as a political radical, Agustin, accordingly, has been executed by Nogales not because of Julia but because of his political views. To most, this shift of causation may seem like a minor detail in what is described by his fellow citizens merely as “destiny.” But given the Colonel’s strong moral code, the realization of the “truth” is everything. 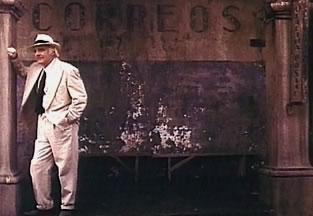 The Colonel reveals that moral certitude once more when, after his Blondie has been stolen from his house by locals (beating Lola in the process) who wish to pit him against Nogales’ cock, the Colonel refuses to allow the fight to continue—despite the fact that Nogales, in league with the corrupt current government, offers the Colonel money and the payment of his overlooked pension if he will allow the fight to continue. The Colonel may be a dreamer and even a fool of sorts throughout Ripstein’s beautifully crafted movie, but in his utter rejection of Nogales’ and the community’s meaningless promises, he alters everything. Nothing after can ever again be as it was, even if the town’s citizens might pretend things will go on as before. The Colonel may hate the Church, but he is a believer of moral values stronger than any other citizen of his Mexican coastal outpost, including the so-called religious believers.


The film ends, as we knew it must, with a dream of hope even within the reality of despair. Convinced his rooster will win in the upcoming fight 45 days away, he sits as if about to wait out the time in proud anticipation of the day when they can pay all their debts. When his wife asks what they eat in the meantime, he answers, “shit,” a word which ends this sad film. Like inverted cannibals, they now have no choice but to consume themselves—bodies which, at least spiritually, are rich and sustaining.