a sound in the night

Manola Dargis of The New York Times—a critic with whom I often find myself in agreement—describes Clint Eastwood’s newest flick as “a strange movie,” which, apparently, she perceives as a positive quality, since she follows that statement up with suggesting it’s a reason “to see it [the movie].” I also have to presume that she sees the quality of “strangeness” as having something to do with the director’s vision, not with the film’s focus on three New Jersey street boys and one college educated (also Jersey born and bred) composers’ relationships as members of the renowned singing group the late 1950s and 1960s, The Four Seasons.


Although I’ve thought long and hard about this likeable but not terribly profound film over the last couple of days since I saw the movie in Los Angeles, I still cannot for the life of me perceive how Eastwood’s rather old-fashioned telling of the rags to riches tale is “strange.” Retaining the hook of the original stage musical, in which each of the four members of the chorus share in the telling of how the group came together and what tore them apart, the director seems hell-bent on creating a biopic about musical creators similar to the dozens of such films throughout Hollywood history—the kind of slightly torrid, but mostly sanitized story that Michael Curtiz shot about Cole Porter (Night and Day, 1946) and Norman Taurog directed  about the career of lyricist Lorenz Hart (Words and Music, 1948)—both of which ignored their characters’ homosexuality—Michael Curtiz’s version of the life of jazz cornetist Bix Beiderbecke (Young Man with a Horn) or Jerry Jameson’s film on country-western singer Tammy Wynette (Stand by Your Man)— to name some at random.

Like almost all such works of this genre, Eastwood and writers Marshall Brickman and Rick Elice chose to slow down the pace of what was basically a review on stage into a slower moving story about the lighter and, more importantly, the darker sides of these performers’ lives. In all such films, the first objective is to simply lay out all the difficulties the musicians faced in achieving their dreams—here played out within a culture in which there are few choices available as ways out: the mob, imprisonment, or becoming a celebrity. Singer/bad-boy Danny DeVito (Vincent Piazza) claims they hit two out of three, but, in fact, DeVito himself is imprisoned, the group has a mob friend in Gyp DeCarlo (Christopher Walken), and they do become a radically successful act—suggesting, in their perverse New Jersey code, they have unfortunately hit the jackpot! So that his audience can still identify with these figures, Eastwood and his writers downplay the jail sentences and mob connections, focusing as much as possible on the groups’ on-stage harmonies. Yet, like most works of this genre, we quickly perceive that off-stage, at least, three of these four figures fail in their personal lives.


Dargis winces at the film’s depictions of the bedroom battles between the film’s central figure, Frankie Valli (John Lloyd Young), and his wife, Mary (Renée Marino), but I’d argue that their offstage encounters—which stand in for all the characters’ marital problems—are no more or less stereotypical or badly told than these figures’ relationships with their parents and the Italian community into which they were born, all which Eastwood flashes out to his audience in the form of ridiculous framed tableaus of pictures of Frank Sinatra beside the Pope and through quick glimpses of domestic delights such as spaghetti with tomato gravy, and mutterings in Italian 101. A serious robbery of a neighborhood shop’s safe alternates with a comic spoof in which the get-away-car, whose front end faces the stars is counterbalanced by the heavy safe stuffed into its trunk. Even murder, a serious concern of the nervous mothers of Valli’s neighborhood, is played out as a sham. Valli is so beloved of mobster DeCarlo that he even offers the up-and-coming hairdresser the chance to shave him.

The fact that despite all of these comically mock-shaves with lawlessness and death that Valli grows up to be a basically nice boy is a miracle which the film does not even attempt to explain. Perhaps he simply is, as several of the film’s admirers of his voice proclaim, a kind of angel.


On the other hand, although we might react to the complaints expressed and loneliness felt by Valli’s wife as somewhat trivial, we cannot help but shed tears—even if novice film actor Piazza has some difficultly in convincingly bringing them into his own eyes—for the effects his absence and his wife’s drunkenness have upon their daughter, Francine, who even after Valli has attempted to parent more successfully, commits suicide.


And then there is DeVito, the fast talking huckster, who at the center of the film is revealed as a far more pernicious force in his robbery of $500,000 from the group and in ability to pay large sum to the syndicate which has loaned the money to him. His behavior is not only dark, but destroys the Four Seasons, and, through Valli’s determination to keep the code of silence (omeria) by paying off DeVito’s debts, forcing the lead singer to spend years of his life grasping for any gig he might get. 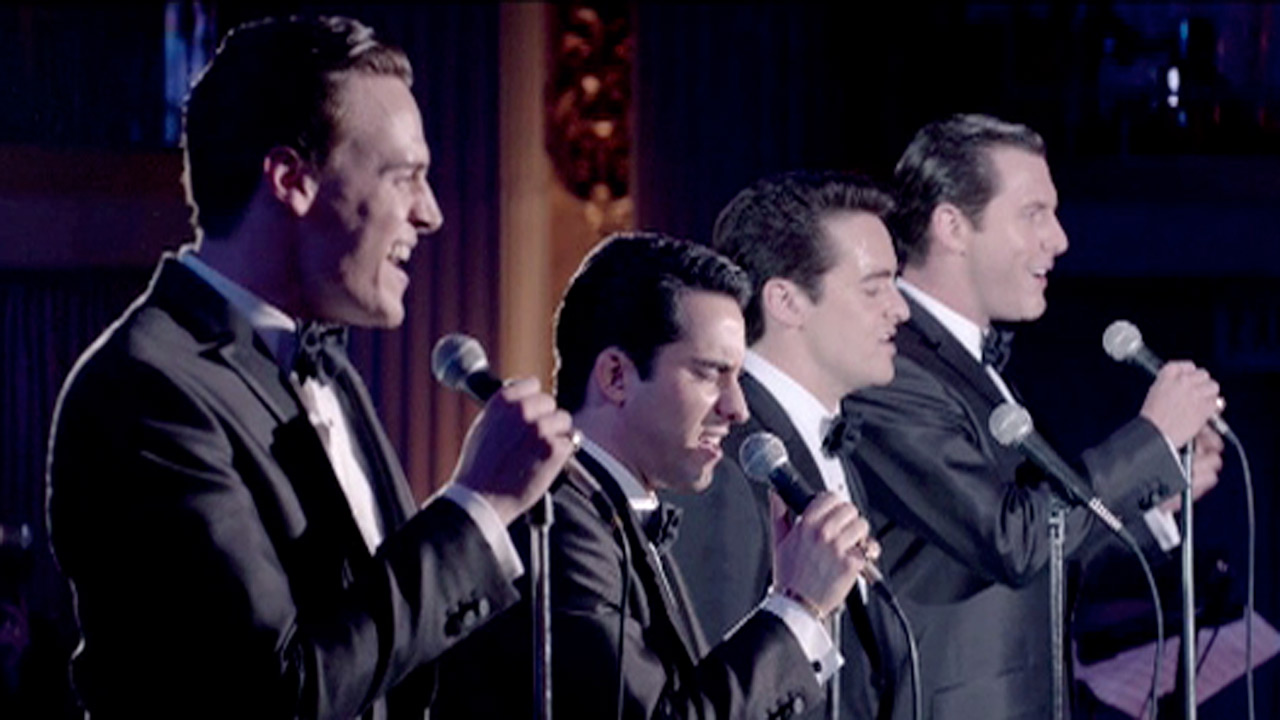 Indeed, when you add these “dark” elements to the more elusive betrayals of “the group” by both Valli and the composer Bob Gaudio (Erich Bergen)—who handshake an agreement that excludes the other two singers—and by producer and lyricist Bob Crewe—who, through a contractual sidebar, forces the singers to backup other acts for two years before they can cut their own demo, and even then, demands that they pay  for the recording—the perceptive viewer may begin to see the film as more dark than light. And then, we begin to realize, that all those previously comic scenes were perhaps not so funny after all.


Of course, it’s the music, the performers’ joyous release into their creativity, that generally clears away the cobwebs and makes all the difficult times appear to be worth the suffering. Eastwood explores these avenues in at least two directions, the first a rather odd one. In the character of Bob Crewe (Mike Doyle)—an important character almost gone missing in the stage musical—the writers have created a slightly over-the-top gay man, who is so constitutionally different from the three of the former “Four Lovers,” that he almost wipes away any frown they might display within the spotlessly white rooms of his swankly ostentatious bachelor boy digs. Mes enfants, he sputters as he introduces the uncomfortable Frankie, Nick,  and Tommy to his haute couture dressed guests. With patience of a snippy queen he explains the meaning of a new song the group is about to perform, “Walk Like a Man.” And with the mad hatter patter of an enthused wedding planner he plots their publicity for a song (“Can’t Take My Eyes Off of You,” Crewe’s secretly gay anthem) that, disliked by the studio head, forces them to go around him. Indeed whenever Crewe enters the film, he seems to wipe all the tears away, lightening the film up in the way such entertainment necessarily must end. The only other figure of the film that can almost match him is singer-composer Gaudio, who with Crewe wrote most the group’s dozens of hits. From the moment Crewe spots Gaudio in the old Brill Building of New York City, his eyes nearly pop out with sexual delight, while the straight object of his admiration quips that none of them had actually seen someone who behaved in real life like Liberace did on television.


Of course, this too is all stereotyping. In real life, Crewe, whom Howard and I knew fairly well, was nothing at all like the “puff” Doyle portrays (although Doyle does look something Crewe). But you have to give it to Eastwood in these scenes for finding another way to balance the darkness his subjects do project.


Obviously, in all such works, it’s the music (and lyrics) that matters most, for without that there could no film in the first place. Certainly, the successful Broadway show realized that in putting The Four Seasons’ songs front and center.


If there is anything “strange” about Eastwood’s film, however, it’s the way the music functions—and ultimately fails—in this work. Growing up with the music, I can say that most of these songs sound almost like anthems to my own youth, and mostly Eastwood—himself a lover of music—gives these ditties a chance to shine. From the early hits, “Sherry,” “Big Girls Don’t Cry,” “Workin’ My Way Back to You” (a non-Gaudio/Crewe song) “Walk Like a Man,” and “Rag Doll,” to the later works “Can’t Take My Eyes Off of You,” “Bye Bye Baby” and “My Eyes Adored You,” the movie allows the Jersey Boys to sing out in joyous rapture—led by Young’s convincing falsetto imitation of Valli—that almost transports us back into another time and place—with Eastwood transforming his biopic into a musical after all!

Eastwood, who reports that he saw the Broadway show on which he based his film, in Las Vegas, San Francisco, and New York, clearly loves The Four Seasons and their sound, claiming in a recent Los Angeles Times article that he believes the Jersey singing group “has endured more than even the Beatles or the Rolling Stones.”


If there is anything “strange” about Eastwood’s film, finally, it is that despite his love for this music, despite my own and possibly every other member of the cinema audience’s pleasure in hearing these toe-tapping bundles of nostalgia, the songs can’t really redeem the ultimate emptiness of the performers’ lives—or justify, as Nick Massi (Michael Lomenda) eventually screams out, as he prepares to leave the group, all those meaningless hotel room nights. The music is great fun, but two times through “Sherry” is more than enough. The charming Gaudio-Crewe baubles are not, as anyone who truly loves music must admit, as profound as the greatest of The Beatles’ or Rolling Stones’ masterworks. A sweet "rag doll" is just not significant as “satisfaction.” In short, the songs of The Four Seasons, even if they have endured, simply do not hold up to loss of love and unfulfilment each of these figures faced in real life, or, at least, what the film represents as their “real” lives. Even as the fab-four wind up belting out their melodies at the Rock and Roll Hall of Fame, the director interrupts it, as if even he recognized the song need not be repeated, for a voice-over final statement from composer Bob Gaudio—a man now living in Nashville.


A few moments earlier Valli, asked by a reporter what moment of his career meant the most to him, responded “Four guys under a street lamp, when it was all still ahead of us, the first time we made that sound—our sound.” Clearly, Valli has never left his hometown in New Jersey, where he stands forever on the street, conjuring up not a life but a “sound.”


We never see that moment within the structure of the film, so in terms of the plot, it does not truly exist except as a kind of imaginative speculation of a possibility never transcended. And that is perhaps the darkest statement (about an event enacted only in shadow) of a film, in retrospect, that seems to be screened mostly in black.