Getting to Know You
by Douglas Messerli

According to the Kinsey Report
Ev’ry average man you know
Much prefers to play his favorite sport
When the temperature is low,
But when the thermometer goes ‘way up
And the weather is sizzling hot,
Mister Adam
For his madam.
Is not,

If there was ever a man who burrowed “under the skin,” so to speak, of American culture, it was Alfred Kinsey; Kinsey, indeed, went straight to the heart—if brain and sexual organs properly account for that metaphoric center of being—and in the process terrified the U.S. society of the 1950s. William Condon’s 2004 biocinema nicely outlines Kinsey’s career and points up his effects on American’s sexual understanding and, ultimately, the sexual politics of our time.
As early as the 1930s Kinsey became interested in the different forms of sexual practices. The movie dates that interest, in fact, back to his 1921 marriage to Clara Bracken McMillen (Mac), when the couple discovered that given the size of Kinsey’s penis and the thickness of Mac’s hymen, sex was just too painful. They consulted a doctor who quickly resolved their difficulties. But soon after, when students begin approaching the biologist about questions they had concerning sex, Kinsey—who up until that time had devoted his life to collecting and cataloguing gall wasps—was appalled at their lack of knowledge and the nonexistence of any intelligent studies on the issue. 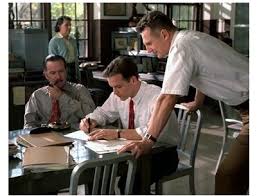 In 1935 Kinsey (Liam Neeson in the film) delivered a lecture to a faculty discussion group at his Indiana University, attacking “the widespread ignorance of sexual structure and physiology,” perhaps the first such public discussion of the issues. Soon after, he began teaching a course on sexuality (a topic discussed previously only in anatomy classes) to graduate students and married and engaged undergraduates.
The frankness and thoroughness of these lectures predictably scandalized many of the university supporters and faculty members, a hostility which would eventually work against Kinsey’s research. One of the unsung heroes of the movie—and in real life the force behind Indiana’s phenomenal progressiveness not just in the sciences, but in music, art, literature and athletics—was the newly appointed (1937) University President Herman Wells, whose ability to obtain university support for what was to become the Kinsey Institute was something close to a miracle given the political context of the times.
Kinsey’s experience with the diversity of the gall wasp population, determined by his accumulation and cataloging of a large cross-section of the species, predicted his methodology for his human sexual studies, which is probably what led to his funding by the Rockefeller Foundation, and ultimately, was to his undoing.
The film, unfortunately, too easily connects his interest in this subject by presenting Kinsey’s religiously Alfred Kinsey   conservative childhood as a sort of case study on his psychological makeup. There can be no doubt that being born into a devoutly religious family—wherein the father was an imperious patriarch who demanded his children have no contact with the other sex and who outlawed any sexual behavior, including masturbation—greatly affected Kinsey. But one should remember that such restrictions were placed in varying degrees upon many thousands of young men and women of the day, myself included, who—although they later rebelled against those limitations and the perceptions behind them—did not go on to liberate American sexuality. 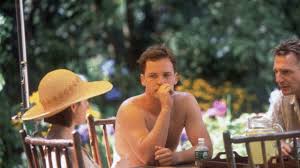 Of greater interest is the open-mindedness of Kinsey’s wife (brilliantly played in the movie by Laura Linney), without whose support and sexual openness it would be hard to imagine her husband’s achievements. One of the most touching moments in the movie, in fact, occurs upon Kinsey’s admission of having sex with his young assistant, Clyde Martin, which, despite her free-thinking, Mac finds difficult to understand or accept. In the film you can almost see the pain she suffers—not entirely because of her own sense of betrayal by her husband’s sexual infidelity. She seems nearly as troubled by her inability to embrace this societally “banned” behavior. Linney’s face projects not just the fears of a woman losing her connubial relationship, but of a woman unable to intellectually accept a fairly common behavioral pattern on such a personal level. As Clyde Martin says later in the film: “Sex is a risky game, because if you’re not careful, it will cut you wide open.”

In 1948 Kinsey published his earth-shattering study Sexual Behavior in the Human Male, based on his thousands of interviews with males collated in what would later be seen as controversial questionnaires. The findings of this study can be boiled down to several simple observations that seem almost obvious given most of our current attitudes toward sex: “diversity is life’s irreducible fact” and “the human being is capable of all sorts of love.” Given the context of the time, however, represented in the film by statements made by fellow faculty member Thurman Rice—“The idea that man needs sex is a lie”; “Men don’t reach their sexual peak until the age of 40.”—one understands how radical Kinsey’s findings were. The film also presents a poignant scene that is far more emotionally grounded for me than the potential violence against gays presented in the more recent Brokeback Mountain. Interviewed by the scientist, a young gay man reveals that having discovered he was gay, family members literally branded him and his friend on chest and back, the friend dying in the process. His assessment of his own sexuality is powerfully expressed in utter simplicity: “It’s not that I mind being gay. I just wish people weren’t so put out by it.”
Kinsey, however, went further than simply observing the variant sexual behaviors of his interviewees. He planned a future volume on sexual perversions and argued from the start that if a sexual pattern existed on such a large scale as his studies suggested that it could hardly be labeled a crime: “Everybody’s sin is nobody’s sin, and everybody’s crime is no crime at all.” It was this argument that weighed heavily in the American Psychiatric Association’s 1973 decision to remove homosexuality from its list of mental illnesses. Its implications, however, go much further and include issues such as incest and pedophilia. The movie attempts to make it clear that Kinsey never condoned sexual abuse of any kind, yet it also suggests that he was far more embracing of sexual behavior than our current society might accept. His views of the hysteria surrounding pedophilia and other criminal sex acts could apply equally to our current attitudes toward what we see as “sexual aberrations.”
It was one thing to present the country with a detailed report on male sexual habits. Interviewing women and reporting their sexual actions was too much. Kinsey’s discoveries—that not only were females as capable of sexual response as men, but half of the women he interviewed had engaged in premarital coitus and one-quarter in extramarital sex, and 62% of his female interviewees had engaged in masturbation while 13% reported to have had at least one same-sex orgasmic experience by the age of 45—were facts simply too shocking for the male-centered, sexist authorities of the day. FBI director J. Edgar Hoover, angry over Kinsey’s refusals to supply him with information about homosexuals he’d interviewed (hilariously funny in the context of what we today know about Hoover’s own homosexuality), had Kinsey put under surveillance; imports of pornography ordered for research by the Kinsey Institute were seized; and the Red-suspecting Reece committee—looking into Communist-supported foundations—argued that Kinsey’s books were designed to destroy American morals, allowing for a Communist takeover. The Rockefeller Foundation withdrew its support, and when Indiana University President Wells attempted to obtain monies from the university, trustees voted against him. In 1956, two years after his loss of funding, Kinsey died. 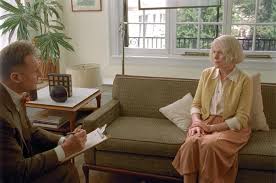 The film stops short of his death, presenting instead two important images of the scientist, one suggesting the long-lasting love between him and his wife, and the other revealing—despite his feelings of failure—the enormous effects of his research. Speaking of the difficulties she encountered upon Liam Neeson and Laura Linney in Kinsey   discovering her feelings of love for a woman fellow-worker, an interviewee (in a cameo role by Lynn Redgrave) admits her own depression, alcoholism, and ostracism by her husband and children. Kinsey’s rejoinder “That just goes to show how little things have changed,” is met with her absolute denial: “No! After I read your book I realized how many other women were in the same situation. I mustered the courage to talk to my friend and she told me, to my surprise, that the feelings were mutual.” Now in a relationship with that woman, the interviewee testifies to what we all know is the truth: “Things have gotten much better.”
However, there is still a great fear, I must admit, in the back of my mind—as well as millions of other who recognize Kinsey as an important liberating force of American sexuality—that things may not have changed as much as we’d like. The continued virulent attacks by religious fundamentalists on all matters sexual—but particularly on homosexuality and other minority sexual acts—must be recognized. On the internet I quickly found a posting by a group called Concerned Women for America touting, once again, the accusations of critics such as Judith A. Reisman—who argued that Kinsey’s staff sexually abused children—and accusing the film of “celebrating the sexual researcher’s ‘liberating’ ideas” and encouraging “the Kinsey sex cult” of promoting “free sex, regardless of the human cost.” The group suggests an alternative of “education, prayer and action” to “turn harmful laws and teachings around to protect, rather than harm, the American family.” It’s strange to read this last statement, for except for prayer (an action the film portrays Kinsey undertaking as a young man to fight his desires to masturbate) I presume that Kinsey might have agreed: it’s simply a matter, I guess, of which way you want to turn things, toward the light of truth or the darkness of denial. But then the definition of “truth” and “denial” are equally slippery concepts. As Kinsey says: “Love is the answer, isn’t it? But, sex raises a lot of very interesting questions….”