in the pink
by Douglas Messerli

After the great success of Jacques Demy’s cinematic “opera,” The Umbrellas of Cherbourg (1964), Demy continued somewhat in that same musical genre in his 1967 work about another French seaside harbor, The Young Girls of Rochefort. This time, however, the work, involving three would-be love affairs, included some spoken dialogue, and added dance, accomplished by the American male leads, George Chakiris (as Etienne), Grover Dale (as Bill), and Gene Kelly (as Andy Miller).

Although there’s been some criticism of Demy’s abilities to handle the rhythmic challenges of dancing—this despite Demy’s floating and almost always dancing camera in Umbrellas—it may have been the rather pedestrian choreography of Norman Maen that was at fault, particularly since Kelly (who did his own choreography) comes off far better. But it’s also the very presumptuousness of the dancing carney boys, come to entertain in the Rochefort city square, and the almost loony behavior of the entire towns-folk as they are represented as nearly always dancing down their streets. Occasionally, as in On the Town even the local sailor’s dance. The sailor central to this tale (Jacques Perrin as Maxence), a poet-painter in his off time, presents, instead, an absolutely winning personality through song, which isn’t hurt by Perrin’s blonde-haired-boy beauty. Here he’s a dreamer at the heart of Demy’s vision, and is the very last to get what he desires.
Indeed, once you simply get used to the fact that Etienne and Bill will line up with their chorus girls from time to time to create balletic-like facing patterns, the work becomes much more fun. And it’s even more quick-witted when the two friends lose their female partners, admitting that in their heir perpetual trek across the country, that they’re permanent buddies. Upon meeting the American Andy, whom the costume designer has dressed in a pink shirt, Demy even allows the two well-known American gay dancers a joke, at the expense of his heterosexual lead, as one them suggests they all seem to “in the pink.”
And then there are the two absolutely beautiful and talented Garnier twins, Delphine (the always lovely Catherine Deneuve) and Solange (Françoise Dorléac) to charm the eyes, along with the wit and wisdom provided by their hard-working, french-frying mother, Yvonne (Danielle Darrieux), who was once in love with a musical-store owner, Simon Dame (Michel Piccoli), but who left him because of his ridiculous family name—which, if they married would make her Madame Dame. Unbeknownst to her, the still love-stricken Simon has now, after 10 years, moved from Paris to their rural town.

So, of course, the narrative of this cockatrice will have to be taken up with the details about with how the young sailor who dreams of a woman just like Delphine (he’s already painted her simply out of his imagination), and Andy, who laying eyes on Solange immediately falls in love the red haired beauty, will finally come together, along  with finding a way to get Yvonne away from the frying pan long enough to discover her true love Simon, whose son is the young boy Booboo (Patrick Jeantet), whom nearly everyone in fairytale city is asked to pick up from school, since she can never leave her café prison. 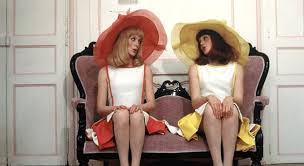 This film, moreover, is also a road movie. The carney dancers are in town for just few days, and the sisters are eager to join them to get to Paris where they can compose and dance. And Demy, just for fun, also turns the whole affair into a hometown stage-show a bit like Andy Hardy, Mickey Rooney and Judy Garland productions, as the Garnier sisters are suddenly asked to join in the festivities (performing a piece which takes us back to Marilyn Monroe’s and Jane Russell’s big number in Gentleman Prefer Blondes). Of course they’re a hit!  But just to be sure that he has covered every base, the director also throws in dark Chabrol-like twist in that same daily newspaper that gushes over the twins’ talent, as a local friend of Yvonne’s grandfather turns out to be a murderer who has cut up his victim into pieces and laid them out in their proper anatomical positions. All of these clashing genres, moreover, are ladled up, as in Umbrellas, with Michel Legrand’s highly romantic score.
In short, The Young Ladies of Rochefort, like most of Demy’s works, is a testament to the cinema itself. And it hardly matters that not a single moment of it is even slightly believable. This is Hollywood through Demy’s French lens, and you’d have to be something of ogre (as critics such as Pauline Kael often are; her comment a few years later: “A movie like The Young Girls of Rochefort demonstrates how even a gifted Frenchman who adores American musicals misunderstands their conventions.”) to find fault in such a theatrical pot-au-feu.
No, Ms. Kael, I argue, it is not that Demy misunderstands the conventions of American musicals and other generic works, but simply that his is a world of fantasy that even the American musical cinema cannot quite embrace, since we still require some few elements of realism in even the most light-footed stage adaptations. The French, who love Demy far more than do most Americans, seem to be happy with the complete banning of realist tropes.

Another critic, David Thomson—who can also be, at times, tart-tongued—truly does understand Demy and his significance:

Twenty-plus years after Demy’s astonishing productivity
in the sixties and early seventies, he does not seem quite
possible. Did he really live? Have those wistful, gentle, and
melodic films been made? Or is he only an ideal director one
has dreamed? Already, the young film-goers do not know his
name. It is more plausible as legend than as film fact that someone
made movies in which all the dialogue was sung…. It is already
a more forlorn hope than likelihood that anyone would make
pictures as graceful and humane as those of Max Ophuls, as
poised between speech and music as Stephen Sondheim. It may
be more comfortable in this age of dread-ridden movies to
believe Demy never existed.

I haven’t yet seen the new, yet-to-open American film musical, La-La Land, but it sounds like maybe, thankfully, Demy has finally been rediscovered. We need him more than ever in these dark days. 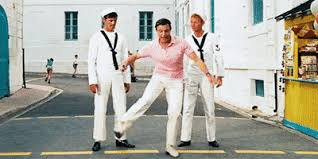 And beyond that, Demy created an entirely gay world--and I mean that in all senses (the husband of the great Agnes Varda died of AIDS--that represented a kind of romantic viewpoint that, although incorporating heterosexual tropes, really does speak of the gay experience.
Recently on TMC I watched the film again, and realized just how truly homosexual Demy's worlds always were. Gay guys jump out of the screen, pretending to be involved with the lovely young maidens of Rochefort, while one cannot help but perceive that they are far more interested in their male counterparts. Gene Kelly can contort his heterosexual values as much as he can, but it's the lovely dancers Chakaris and Perrin, as well as the two other blue-eyed sailor boys that make this film the joy that it is. Goodbye lovelt ladies, let the boys sing and dance their way through the world which they truly inhabit. The women even dismiss their male lovers, realizing that they're never going to truly satisfy them. And they ultimately use them simply for escape from the provincial worlds their currently inhabit. The dancing boys are their only route out.