a gift of words
by Douglas Messerli
Ingmar Bergman (writer and director) Tystnaden (The Silence) / 1963, USA 1964
I don’t know why I had never seen Ingmar Bergman’s The Silence before the other day, since I saw most of his films as a young college student. I do know that the year it appeared in the US, I was living in Norway, next door to Bergman’s Sweden, and only attended movies at the isolated city in which I lived once or twice. In any event, I have long been a Bergman fan, and this excellent film from 1963 even further revealed his talents.

What struck me most about this parable-like tale about two traveling sisters, one with a ten-year old boy was that it is a simple tale with complex emotional resonances. One of the sisters, Ester (Ingrid Thulin), who works as a translator, is deathly ill, demanding that they stop for a night’s rest in the Balkan-like country through which they are traveling on their way back to Sweden. If Thulin is sickly and quiet, Anna (Gunnel Lindblom) is sensuous and out-going, and quickly leaves her son Johan (Jörgen Lindström) to his own devices in the once glorious, but now run-down hotel where they have decamped. She goes to a nearby café, flirts with a waiter, and attends a cabaret show wherein she watches a couple have open sex beside her. 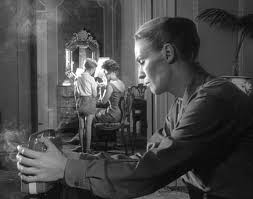 Johan, meanwhile, discovers an entire troop of Spanish dwarves, who also perform at the cabaret Anna later attends; in their room, the little people dress the young boy up as a girl, which seems to delight the bored but curious child. Johan, after some hesitancy, also makes friends with the floor porter, and returns to his sick aunt’s room.


While Anna and Johan go about their business (which also includes Anna’s bath and a nap), Ester masturbates and orders up a second bottle of alcohol, all the while smoking cigarette after cigarette. Is it any wonder that she is ill?
Critics and other filmmakers (such as Woody Allen) have long argued that Anna represents the emotional world, whereas Ester is all intellect, some even claiming that they stand as two aspects of the same woman. But a symbolic reading here, I would argue, would be to turn a much more radical film into the kinds of Bergman works that preceded it.
But The Silence seems to me to be something fresh, much closer in tone to Antonioni’s L’Avventura or Fellini’s La Dolce Vita, both of two years earlier, and the women seem to me to not be aspects of the same self, but involved in a very perverse relationship, where what once seems to have been deep love has become hate, particularly for the weaker of the two, Anna.
For despite her illness, Ester is clearly the stronger and lives in a much odder world (of drugs, sex, and language) than her nearly silent—if sexually outgoing—sister. Unlike Anna, the translator sister reaches out to discover various words from the porter, the beginnings of communication in this very strange city, Timoka, on the brink of war.
Of course, there is also a war going on between the two sisters, and obviously it is based on long-seething tensions. Bergman never attempts to tell us what those tensions are based on, but it quite evident that, at least at one time, the two shared what one might even imagine to be a kind incestuous love. At several moments, Ester reaches out to touch and try to communicate with the unthinking Anna. At one moment, while Anna is napping, Ester enters her room and quietly strokes her sister’s hair; and at another moment, when Anna is announcing that she is going out that night with the waiter she has met, Ester begs her to stay with her.
And clearly her son has created some sort of edge between them. Obviously, the sexual tensions between them—Anna’s determination to find heterosexual relationships—has helped to develop the hate she feels for her elder sibling. Although, it is clear that the curious Johan is closer to his aunt in his search for words and for experiences outside the normal, he will not let his aunt touch him, allowing to be hugged only by his doting mother.
After finally spending a sexual but wordless night with the waiter, Anna exits the empty hotel room the couple has used, to find Ester sitting in emotional turmoil outside their door, reminding me very much of scenes from Rainer Werner Fassbinder’s 1972 film, The Bitter Tears of Petra van Kant, and suggest that Bergman, himself, might have been influenced by Djuna Barnes’ 1936 fiction, Nightwood, where two other women, traveling throughout strange cities in Europe, love and betray each other. Barnes’ grand play, The Antiphon, premiered in 1962, just a year before The Silence, in Stockholm, the Swedish translation by Karl Ragnar Gierow and U.N. Secretary-General Dag Hammarskjöld.
By the next morning, Anna is determined to travel on with her son, without Ester, leaving the formerly loved sister forever behind. But the link between Johan and his aunt is extended, as she hands him a letter: "To Johan – words in a foreign language.” As the boy begins to read the missive, his mother opens the train window to let herself be washed by the outside rain. If nothing else, however, Ester has provided Johan clues of how to break the silence imposed upon them.
The elegant mysteries of The Silence help to explain the genius, three years later of Bergman’s Persona, wherein the two women actually do, at moments, get inside of each other’s bodies, and surely we can seek the breaks that these two films make between Bergman’s earlier and later works.