the kind warrior
by Douglas Messerli

A great many of Werner Herzog’s cinematic heroes are men of stunning contradictions (Fitzcarraldo, Kasper Hauser, Stroszek, and Woyzeck to name only a few), but none of them is more so than Timothy Treadwell, the focus of his 2005 documentary Grizzly Man.
Treadwell saw himself as a protector of wildlife, particularly of the bears in Federal Alaskan parks, a “kind warrior,” as he put it, at one with the spirit of the wilderness. And for  13 years he lived among the wild giants and friendly foxes, many of whom even submitted to his gentle petting. If nothing else, in his own mind, Treadwell was a true hero, teaching young children, in his off time for free, through the films he had made on the Alaskan Peninsula, about the wonders of his orsine neighbors. He particularly saw himself as a protector of them from poachers.
Yet park officials maintain that there had been little if any poaching of the beasts, which were protected except for limited kills. Moreover, by living among them, he may, in fact, have inured the bears to the dangers of human beings, and thereby endangering them and humans visiting the park. Although his films may have made his Grizzlies into a natural wonder, they also advertised the bears’ whereabouts, with gawkers and hunters following Treadwell’s tracks to the Grizzly maze. 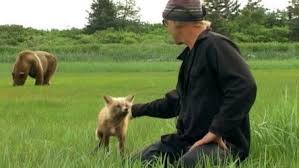 Although, on the surface, Treadwell seemed like a cute and likeable guy, who had found his cause and new meaning through the wonders of nature, he, nonetheless, had a troubled past, particularly with alcohol and drugs. Even from the descriptions of his friends and his own commentaries, it is quite apparent that Treadwell suffered from cyclothymia or bipolar disorder even if Herzog never makes that assumption.
Although he had loyal women friends, Amie Huguenard and Jewel Palovak among them, Treadwell, it seems, was a bit of a misogynist, in one tape wishing that he were gay so that he could freely have one sexual encounter after another (as if that’s what most gay men desire); he laments having to “finesse” women.
Although Herzog sees, in Treadwell’s numerous on-camera retakes and costume changes, evidence of a skillful documentarian—and given some of the beautiful scenes we are shown, it is clear that Treadwell was able to capture natural events that many more noted directors were unable to—these same scenes also reveal a highly narcissistic human being, a man increasingly moving away from the real world in order to live in his own imagined and even sentimentalized Eden.
Indeed, his last trip back to the lower states, after encountering a rude airport agent, sent him back to Alaska, putting himself and his companion, Huguenard, into further danger by coming into contact with Grizzlies during the period in which they headed for hibernation and were necessarily trying to provide themselves with enough food to survive it.
The bear that finally killed Treadwell and Huguenard was a relative stranger to the area, and surely was less intrigued by the bear-lover's existence than simply recognizing him and his companion as sources of sustenance. When the animal was later shot, there was evidence of four human bodies within its stomach (I wish we might have discovered who these “others” might have been; were they, like Treadwell, simply putting themselves in danger?).
Of course, without Treadwell, we could not have experienced such thrills as watching, arctic  foxes scampering through the landscape of the burly, lumbering giants, nor have witnessed a fight between two would-be Alpha male bears, wherein the elder fights off the younger’s challenges. And it is quite beautiful to observe Treadwell’s obvious love for the animals and landscape of the wild. We have the ominous sense, throughout, that even if the two had not been brutally eaten in 2003, that that year might have been Treadwell’s last. Throughout, the documentarian with the documentary warns himself and us of the dangers he daily encounters; part of his self-mystification, surely, but also clearly the truth. That he had survived for so many years is, as all those knowledgeable proclaim, more than a miracle.


Such a figure of determined self-destruction, for anyone who has seen Herzog’s film, is just what most interests this director. His men (there are only a few women leads) live macho lives that go beyond the ordinary boundaries of human behavior. Herzog even uses himself, in this case, as a man willing to hear what one might describe as the “full” horrifying story as he  listens, without allowing us to hear, the tape recorded during the bear attack, now owned by Palovak. Although the camera does not look directly into Herzog’s face, we can perceive that the horrors he hears are enough to make a grown man cry. He tells Palovak, who not listened to the tape, to get rid of it before it might becomes her “white elephant” in the room. Wisely, she puts them away in a vault.
In the end, Herzog would have us see Treadwell as a kind of transformed “believer,” as a man who, after a near-death experience from drugs, was born again into an almost mystical relationship with nature. He wanted, so it’s suggested, to himself become a bear. In the Grizzly Treadwell found a new god. To give Herzog credit, he interviews a native Inuit scholar, whose own culture also idolized the bears, but who, unsentimentally, kept a far distance from them, recognizing their powers and dangers.
Like many who embrace strange outsider religions, Treadwell’s embracement of the god-like bear ended in his and Anne Huguenard’s deaths—something which perhaps Treadwell himself subliminally desired, while yet urging Huguenard in the last moments (so we are told) to run, to abandon the faith.