Casey Robinson (writer, based on the play by Zoë Atkins, based, in turn, on the novella by Edith Wharton), Edmund Goulding The Old Maid / 1939 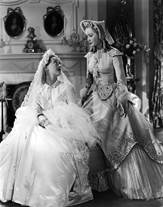 Edmund Goulding’s 1939 film, The Old Maid, starring Bette Davis, is a hot-house tear-jerker, based on a mediocre (but Pulitzer Prize-winning nonetheless) 1935 play by Zoë Atkins, which in turn was based on a somewhat sentimental novella by Edith Wharton. It short, it was perfect material for a Hollywood movie of the late 30s and 40s, just ripe for the mercurial acting talents of Davis and Miriam Hopkins, who Davis remembered fought her tooth-and-nail not only on the screen but during the filming of their scenes. By the time of this movie, Hopkins had lost her major star status to Davis, and was furious that the role of Jezebel that Hopkins had made famous on stage had been a triumph for Davis on celluloid. Of course, just such an on-the-set battle of divas assured the film would become a great public success; and it was!


Today it is still a great deal of fun, and well worth watching. The Lovells may begin the film as “loving cousins,” but by end of this movie they have become “loathing competitors” for the love of Charlotte’s (Davis) bastard daughter, fathered, in a brief visit back home to claim the hand of Delia (Hopkins), by Clem Spender (George Brent, once Davis’ real-life lover). Delia, however, is at that very moment about to marry the wealthy Jim Ralston (James Stephenson), and has no intention of hooking up again with the irresponsible Clem, who soon after returns to the Civil War battlefields, dying a couple of years later without ever knowing that he had spawned a daughter, Clementina (Jane Bryan).


The middle of the 19th century, obviously, was not the best time to flaunt the existence of a child born out of wedlock, and Charlotte establishes an entire orphan’s home to hide her Clementina, whom she passes off as a foundling.


When Charlotte is finally about to marry Jim’s brother Joseph (Jerome Cowan), she, continually pressured by the Ralston’s to give up her orphanage, makes it clear to her cousin why she will not do so. And the ever conventional Delia quickly discerns from her cousins’ hints who the father was, insisting she intends to tell Joseph the truth; she doesn’t do that, but instead spreads a lie about Charlotte’s health which has the same effect, but doesn’t even give the fiancée an opportunity to accept the child as his own.


Now without a cover, Charlottes does give up the orphanage and moves in with her cousin, her own daughter perceiving Delia as her mother, while Charlotte is perceived simply as her aunt. As the year’s pass the gulf between Charlotte and Clementina grows, as Delia spoils the girl while the now aging Charlotte, acting the role of the maiden aunt, corrects her and attempts to instill higher values than the vacuous Delia can even imagine.


When the young girl falls in love with the son, Lanning Halsey (William Lundigan), of another wealthy local family, his parents attempt to block the romance by shipping Lanning off to Europe, leaving the young girl, quite obviously, heartbroken. Charlotte, finally determined to act, is about to tell Clementina the truth, until Delia offers another solution, suggesting she adopt the girl as her own daughter; surely, she argues, given her own inheritance she has received with her husband’s death, Lanning’s parents can no longer object to the liaison.


That solution, quite obviously, even further removes Clementina from her birth mother, and continues to alienate the beautiful you girl, now about to marry Lanning, from her interfering aunt.


You can almost guess the rest. Davis has played a long list of self-sacrificing women in love, who give up everything for their moral principles and societal decorum. All Charlotte gets for her sacrifice is a last kiss before Clementina is whisked away to her new home. But, as always in such tear-jerkers, that seems to be enough, as the aging old maid turns back to a life of what will indubitably be continued in squabbles with her double-crossing cousin.


What is truly at the heart of this work, however, is not Charlotte’s grace—which Davis offers up in ladles, making her the most likeable figure of the work—but the opposition between the free-spirited Charlotte and the social-conniving Delia, who has, unbeknownst to herself, given up love and self-reliance to social convention. If both women are left empty-handed by film’s end, Charlotte is far better able to organize and control her life. Delia, we are certain, will simply drift into a meaningless dependency, wasting away. Perhaps some day…. Well, that’s not in the script. Today they’d make a sequel you wouldn’t want to watch.