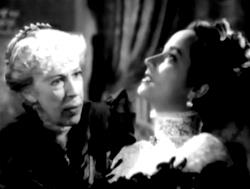 My guess is that most Americans, particularly those under the age of 75, have ever heard of French director Julien Duvivier’s 1941 American made movie, Lydia. One of just a few films he did in Hollywood, Lydia is a melodrama, and although quite well acted by figures such as  Merle Oberon, Edna May Oliver, and Joseph Cotton, the film, overall, it does not rise to greatness. Of course, that doesn’t at all mean it’s not worth revisiting, particularly at a time when (at least in Los Angeles) Duvivier’s French-produced Panique has been revived in local theaters. By accident, I had recently watched another of this director’s American films, The Great Waltz, so when I saw that Film Struck was featuring the Criterion version of Lydia I was determined to see it.


The story itself is rather static in its structure, although Duvivier’s beautiful imagery takes it down various different lanes. An elderly beauty, Lydia MacMillan (Oberon), has become famous for the school for the blind which she has founded years before, and one of her old beau’s, Michael Fitzpatrick (Cotton) decides to revisit her after decades. Lydia, now a decided spinster, is delighted by his visit and agrees to a dinner date a few nights later.
As a surprise Fitzpatrick invites all of her former lovers—most of whom have asked her to marry them—to dinner as well. They include a rambunctious former football player, Bob Willard (George Reeves); a blind pianist who has worked with her at the school and composed a piano and orchestral piece in her honor, Frank Andry (Hans Jaray); and, arriving late, the real love of her life, Richard Mason (Alan Marshal). Over drinks the now reflective and quite witty Boston beauty recounts their loves and why she has turned down their marital offers. What becomes clear in the process is that, although she has loved Mason, Fitzpatrick might have been the best man for her. But, as she herself perceives, in her youthful willfulness she was not a coherent being.
In some ways, she has loved all of them, but held out because of her passion for Mason, who having left her alone in the family’s seaside cottage, leaves her to clear up vague events concerning what may be another relationship, promising to return and marry her; for a long while he send her messages, each with a ring inside, but he never does come back to marry her. It was while seeing both Willard and Fitzpatrick off on their way to war, that Lydia met a young blind boy who, after visiting the hovel in which he lives, determines to help him and his family, thus establishing her life’s commitment.


Each of the men is still entranced by Lydia’s grace and beauty, and evidently none of them has married either. When, finally, out of curiosity Mason arrives, he does seem to even remember the woman who loved him so deeply—a kind of ending that seems to come right out of the stories of O. Henry!
In short, Lydia is long on talk and chronology, yet Duvivier’s sweeping camera (something  he shares with Max Ophuls), the stunning sets at the McMillan mansion, the several dance halls (Willard and Lydia remember a unreal version of reality with dozens of harps), and the seaside cottage, along with the costumes and the wit of Ben Hecht’s and Samuel Hoffenstein’s script (particularly as delivered by Lydia’s grandmother (Oliver), make this an absolutely enchanting 140 minutes which is so much better than most of today’s Hollywood films that one longs again to return to the period of the studio star-system. Having just watched Oberon early on in career in Wedding Rehearsal and never having been able to forget her from Wuthering Heights, I’ve now become a great Oberon fan, although I do wish she’d been offered more remarkable roles; in this she most resembles the great Bette Davis, even though her gown is not red, but only pink (again in black-and-white). And I now feel that Joseph Cotton never played in a truly bad movie—at least until the 1950s (he performed in Citizen Kane the very same year as Lydia, and followed this film up with The Magnificent Ambersons and Shadow of a Doubt in the very next two years). Before he died, he sent my Sun & Moon Press the manuscript of his autobiography in the late 1980s, which was published by another press as Vanity Will Get You Somewhere. I wish I’d grabbed it up, but I seem to remember that the title turned me off, and I surely felt that we couldn’t pay enough to obtain the rights.
Cotton and Oberon, along with Duvivier’s fluid camera, should send everyone back to Lydia for another or first look.