Mark Robson | The Inn of the Sixth Happiness

Isobel Lennart (screenplay, based on the book, The Small Woman by Alan Burgess), Mark Robson (director) The Inn of the Sixth Happiness / 1958

After I saw Mark Robson’s The Inn the Sixth Happiness, maybe for the sixth time since it premiered in 1958, I decided to check out the comments about the film on Wikipedia, and was amused by the article’s list of grievances by Gladys Aylward, the British woman on whose adventures in China the film was based. Aylward, a small, dark-haired Brit was played in the movie by the rather tall Swedish blonde, Ingrid Bergman (although Bergmann does attempt to be as dowdy as possible, trying hard to hide her natural beauty). Although in reality, Aylward and her family worked hard to pay for her China trip, the movie has her employer “condescending to write to ‘his old friend’ Jeannie Lawson,” and her complex and dangerous train trip on the trans-Siberian railway is summarized by the appearance of a few rowdy Russian troops. The near impossibility of her reaching the northern Chinese city of Tsientsin is summarized in a single scene. The names of places and people were changed, and the fact that Colonel Lin Nan was portrayed as half-European (by the German-Austrian actor Curt Jürgens), when in reality Lin Nan was Chinese only outraged the true hero; the Mandarin ruler was played by British actor Robert Donat. Aylward was also angered by the fact that the movie suggested a love interest between Lin Nan and her character, and that she returned to him at the end of the film, when in fact nothing of the sort ever occurred. In truth, the missionary continued to work with orphans until she was 60 years old. 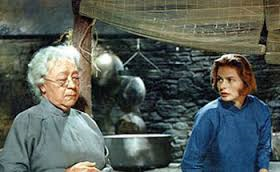 In the very next line of the Wikipedia entry, the author notes, perhaps with intended humor:  “The film was the second most popular movie at the British box office in 1959.” Obviously the writers and directors, with all of their falsehoods, had done something right.


Despite the fact, moreover, that even from my childhood encounter with this film, I recognized it as an epic soap-opera, full of empty pieties, and that I have always detested its too oft-repeated theme-song “This Old Man,” I too still enjoy  this 50s flick, which is what drew me to see it one more time the other day.


Some of my interest in this film surely has to do with my childhood fascination with missionaries. My family went to church each Sunday, but we were hardly what you might describe as a religious family (this, despite the fact two of my mother’s brothers were ministers, one Methodist and the other Presbyterian). In the Presbyterian church which we attended I don’t think I ever once heard about missionaries being sent out to convert or even help peoples of other countries. Yet many a Sunday afternoon, I took to my grandmother’s staircase endpost to present my sermon to the “natives.” I was the firstborn child of what would become a brother and sister and dozens of cousins, and my grandmother, aunts, and uncles, encouraged my exaggerated performances, which, of course, delighted me. Later, when a bit older, I even wrote a musical about a missionary family in the Congo (see My Year 2010).


It is now clear to me that all my fascination with missionaries had little to do with bringing religion into other people’s lives, but was simply a “profession” that was filled, in my young mind, with adventure and, particularly, with travel, something that I have always longed for. Although I’ve been to many countries in the world, there are still far more I would like to visit; it’s strange that I chose to marry a man who today refuses to budge outside the boundaries of the southern part of the state of California, who’s terrified of air travel, and has no interest in leaving home for more than a day.


Yet clearly it was the adventure of Robson’s work (the same director who brought us other cinematic soap-operas such as Peyton Place, The Prize, Nine Hours to Rama, and Valley of the Dolls), not its spiritual message, that so attracted me. Even today I cannot resist the moment when Bergman, momentarily acting as the Mandarin’s foot inspector, asking for the children’s feet to be unbound, is terrified as a village elder becomes determined to unbind her own feet. Bergman screams out with something like “No, you musn’t; the pain will be too great!” Bergman as Aylward seemed to contain such fortitude and strong will that she could even quell a prison riot by promising the interns better meals and a few hours outside of the gate when the prisoners might work on gardens.


Who cared about mule trains being fed and converted with Bible stories? Not I. Only when she began to collect children in the inn, did the tale become truly interesting. And in my 11-yeaold mind—although the film was shot mostly in Wales—it was when the movie moved out into the Chinese landscape that I was truly awed: those mountains and rivers and those terrible Japanese invaders (truly barbarians) who were willing, so it seemed, to kill even 100 children; they did, in fact, kill her loyal aid Li (Burt Kwouk)! The entire voyage reminded me of the Pied Piper of Hamelin, with Bergman as the Piper leading the children out of or perhaps into some heretic sect. But it really didn’t matter what she believed, because I had already fallen in love with the beautiful Bergman—a kind of worshipful half-motherly, sublimated sexual love of the actress which I still feel today.


Finally, there’s no question that screenwriter Isobel Lennart can whip up a great story, Anchors Aweigh, Two for the Seesaw, The Sundowners, and Funny Girl (both stage and screen versions) being among some of her numerous other credits. In Lennart’s telling, the woman who was told she was “unqualified” for serving in China, proves herself so remarkable that, in a world terrified of outsiders, she is awarded Chinese citizenship and given a special Chinese name which defines her as a person loved by the people. Even if we never truly comprehend what lies behind Aylward’s determined love and stoicism, Bergman convinces us with her gentle smile and pleading eyes to believe; and believe we do, in her less than in her religion.