Michelangelo Antonioni | I Vinti (The Vanquished)

Michelangelo Antonioni’s film, I Vinti (The Vanquished), his third film, was not well-received upon its first appearance. In fact the tripartite film about young wealthy kids in France, Italy, and England who, for meaningless reasons, each commit murder, was banned—at least the first section— in France; evidently it still remains banned today, in part because the father of one of the original figures involved in the real case threatened to sue Antonioni. 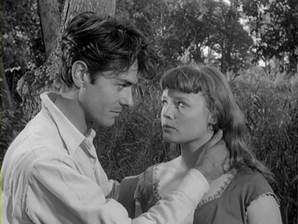 But it doesn’t take much imagination to comprehend why in that decade, seven years out from Godard’s Breathless—a film he and Truffaut were working on when Antonioni’s film was released, and which was postponed because of the outcry against The Vanquished—would have been perceived as shocking, particularly since Antonioni does not even attempt to explain “why” his juveniles committed their real-life crimes, and in his objectivity does not truly condemn them.
In fact, The Vanquished already belonged to a growing tradition of just such films, murders by juveniles whose motives were vague at best. Hitchcock’s Rope of 1948, reminding audiences of the Leopold and Loeb murder of 1924, and which was later revisited in Richard Fleischer’s 1959 film, Compulsion, similarly about wealthy schoolboys, who murdered—in this case just to experience the thrill of killing. The first French episode of Antonioni’s trilogy has the most in common with the Hitchcock work, as a group of young male and female school friends have already predetermined to shoot and rob the most handsome of their group, Jean-Pierre Mocky, who has long bluffed about his wealth and his sexual prowess.


Unlike Leopold and Loeb, they want his money to escape the worlds in which they feel trapped, planning all sorts of imaginary destinations, including Algeria. Yet the schoolmate who does the shooting discovers that the money the victim was carrying is all obviously counterfeit. And a few moments before, the victim has admitted to a girlfriend he shares with the shooter, that his stories about his older lover are all just fiction.
This part of the film also reminds us, somewhat, of Los Olvidados (The Young and the Damned), Luis Buñuel’s 1950 film—although the boys of earlier film have clearer reasons for their actions given their extreme poverty. Yet the seeming group rapport that also dooms one of them presents obvious parallels. As in the 1957 musical West Side Story, their “gang”-like communality helps them to survive, but yet assures their own self-destruction.
Abandoning what later became Breathless, in 1959 Truffaut offered up his own version of bad-boy behavior in The 400 Blows, although unlike the second, Italian, section of Antonioni’s film, Antoine Doinel is merely a petty robber who even attempts to return what he has stolen. The wealthy Italian boy, Claudio (Franco Interlenghi), on the other hand, raises his cash as an organized cigarette smuggler. When customs officers interfere with his actions, he goes on the run, killing one of the officers on the chase. A jump from a high ledge seemingly affects his head, as he continues on the run before finally dying of his injuries.
Today, this second section is the favorite of most critics. And one can immediately see why. Here, the director is on his own territory, and instead of telling a complex story, we mostly are shown, as Claudio seeks out his jazz-loving girlfriend, the urban and barren suburban landscapes that are closer to his films of the 1960s, the period of his greatest achievements. Indeed the rising new high-rises on the edge of the city remind us also of Fellini’s works and Antonioni’s Eclipse and The Red Desert. Since the handsome boy is doomed almost from the beginning, Antonioni shows his character’s inner duress primarily through outer actions, using the landscape itself to express the character’s inner self.
Antonioni not only recognized this, but spoke clearly of his intentions: “I chose to examine the inner side of my characters instead of their life in society, the effects inside them of what was happening outside. Consequently, while filming, I would follow them as much as I could, without ever letting the camera leave them. This is how the long takes of Story of a Love Affair and The Vanquished came about.” And although the landscape of this wealthy boy does not explain everything, it presents us with enough shifting realities that we certainly can comprehend the boy’s angst if not his specific choice of avocation.
The English section is certainly the weakest. The young would-be poet Ken Wharton (Patrick Barr) murders a middle-aged woman he meets simply out of psychological motives. This spoiled schoolboy simply wants attention, and first gains it by calling the police to report the discovery of a body, delighting in a newspaper photograph of himself and his false narrative of what happened.
But when that quickly becomes yesterday’s news, he approaches the police once more to admit that he has committed the murder, assured that there will be no evidence for them to convict him. He has no ties to the woman he has murdered, Mrs. Pinkerton, and absolutely no reason to have even met her or why he might have wanted to kill her. This is truly Hitchcock territory, the story of a sick mind, and is out of kilter with Antonioni’s more oblique approach to the truth. We know the boy is guilty without even caring about his reasons; and so does the jury.
The only thing that truly links these three—other than their almost pointless killings—is that like so many of the generation of children who grew up during World War II, they felt restricted by and isolated from their parents who, after so many years of chaos, were seeking more orderly and ordinary ways of living. To the older generation their children’s behavior simply seemed to make no sense. Like yet another cinematic example of these youthful feelings, Jim Stark (James Dean) of Nicholas Ray’s 1955 film, Rebel without a Cause—a high school boy who, without intention was the cause of two deaths—they perhaps cannot even themselves express why and how they feel as they do. The war their parents had suffered in real space had moved inside their heads. All they know is that they need to “get out” of wherever they are, that they are desperate to find some vague “other” life. And in Antonioni’s study of three such beings we have a marvelous and early guide to what would later define so much of the best cinema of the period. New Wave directors devoted much of their careers to just such figures, and Fellini and others followed them into middle age.