Jeffrey Lau and Wong Kar-wai (screenplay), Wong Kar-wai (director) 旺角卡門(Wàngjiǎo Kǎmén)  (As Tears Go By) / 1988
The first film of Hong Kong director, Wong Kar-wai, As Tears Go By is a gritty gangster movie that reveals what will later be the director’s signature style: images of multicolored romanticism revolving around characters are trapped by their own failures to be able to play out the love they desire. 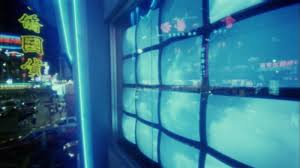 In this film the lovers are a handsome young mob enforcer, Wah (Andy Lau), who is well-liked by the godfather and other toughs who for him. However, Wah’s younger brother, Fly (Jacky Cheung), as some of the other mobsters claim, is “out of control,” and Wah is forced to spend most of his time getting his younger brother out of hot water, often after brutal beatings from Tony (Alex Man) and his gang members.


Further complicating his life is Wah’s lover, Mabel, who reveals early in the film that she has just aborted his baby, having not heard from him for several weeks. Even more intrusive is Ngor (Maggie Cheung), his cousin, who visits the city to see a doctor, believing that has a serious disease. Camping out on his living room couch, she quickly perceives how troubled Wah’s life is, finding further evidence of the chaos of his life in his kitchen, filled with broken glasses and unwashed dishes.


Quietly, Ngor insinuates herself into Wah’s world, cooking for him, cleaning up, and even buying him a new set of glassware. Discovering that she is not ill after all, she departs, leaving a note behind to tell him about the new glasses, suggesting that she knows all of them will soon be destroyed, but that she has hidden one away for later use; she also invites him to visit her someday.


Haunted by her quiet beauty, Wah follows her back to her hometown, Lantau. She tells him that she is engaged to her local doctor, and he begins the boat trip home before receiving a message that he should meet her by the quay. A love affair soon follows, but time and again the pacific life they live together is interrupted by Fly’s disruptive actions back in Hong Kong.


Although Wah has tried to find Fly a normal job selling fish from a local cart, Fly hates his job, and returns to Tony’s club, destroying the mobster’s car, and threatening him with a gun. This time even the godfather will not intrude, and both Fly and Wah are severely beaten by Tony and his gang.


Wah attempts to return to Ngor, but once again he hears of even more serious difficulties: Fly has offered Tony to assassinate a heavily guarded informer, if Tony agrees to release him from his debt. The situation is clearly a suicide mission.


By the time Wah reaches him, Fly has already shot the informer and several of his guards, but he himself has also been killed. With true sacrifice, Wah finishes up the killing and is himself shot to death.


So the movie ends. But the description above gives little of the true aesthetic substance of this early work. Already Wong is far more interested in highly-elegant stills, lenses which transform the city into flashes of candy-colored lights, and the inner, unstated fascination with death that so characterize his later films. Fly is like a lit-up piece of dynamite within a society already determined on destruction, and Wah, as much as his desires push him out of that world, he cannot break the familial ties, both real and symbolic.


In some respects, even in 1988, Wong’s characters’ actions parallel the events upcoming 1990 transfer of the highly westernized city to China. The love the former Colony might have for all things western ultimately will clearly have to sacrificed to the new order. Love, in short, is thwarted in this city, long of the cusp of transition from a culture of openness to the dictatorship that the city faces, and which Wong’s characters so obviously reflect.


Wong is not always sure of his focus in As Tears Go By, sometimes prettifying the ugliest of human behavior, and at other moments sentimentalizing and even fantasizing Wah’s and Ngor’s love (it’s unexplained, for example, how Wah, already on the boat to Hong Kong could suddenly get back to the quay in time to greet the waiting Ngor), and, even more seriously, creating plot strings that go nowhere (why was Ngor so convinced of her nonexistent illness, and why?); we can, nonetheless, see that the director’s instincts are spot-on. Besides, if Ngor’s illness is a product of her hometown doctor’s imagination, by the end of the film she has a deeper sickness to face for the rest of her life.