them and us
by Douglas Messerli

A horde of 40 bandits ride up to the edge of a small Japanese village, ready for a raid where they intend to steal food, women, and anything else they find to be of value. Their leader, however, recalls that they have only recently attacked the village and stolen the rice crop and determines they will return only when the barley crop is harvested. 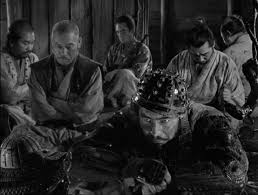 A village peasant, having overheard their conversation, reports back to the townspeople who are troubled and fearful for their lives. One of the villagers, Rikichi (Yoshio Tsuchiya)  insists that they should gather and fight off the bandits, but it is clear that the mostly elderly villagers realize they will be no match for the intruders.


If there was ever an example of a people faced with an invasion of barbarians it is the small farming village of the Sengoku Period portrayed in Akira Kurosawa’s 1954 film, Seven Samurai. Their only solution, the village elder points out, is to hire their own “outsiders,” former samurai, who in this lawless period, are without position and often going hungry. Perhaps they can hire samurai in return for simply feeding them.


A small group of villagers travel to the nearby city which is filled with strutting former noblemen, but these parochials are mostly beaten even for their attempts to speak to the proud former noblemen.


Disheartened, the men are almost ready to return home when they come upon a wealthy man stripping himself of his robes and shaving his head. Appearing as a monk, he tricks a nearby thief who is threatening to kill a child if anyone comes near him. The ruse of a monk offering the man and his hostage rice succeeds, and the child is freed and the thief killed.


Observing this ronin, Kambei Shimada (Takashi Shimura), the men follow him, finally daring to approach him, despite the interruptions of a would-be disciple Katsushirō Okamoto (Isao Kimura) and a hanger-on, a nearly always drunken peasant, we later discover, who pretends noble birth, Kikuchiyo (the wonderful Toshiro Mifune). The gentle Kambei finally agrees to their offer, but only if they can find 7 other samurai to join him.


Almost the first half of this film is devoted to their search, but, of course, in the end they do succeed and, with both the young disciple and the insistent straggler Kikuchiyo they travel back to Rikichi’s village, only to discover that the natives are just as terrified by their would-be saviors’ presence as by the bandits. One of them, Manzō (Kamatari Fujiwara) cuts his beautiful daughter’s long hair, dresses her as a boy, and places her secretly in the woods. And all are so terrified by the arrival of these “outsiders” that they dare not show their faces even to the men they hope help them.


We know, almost from the beginning, of course, that the seven samurai, after building a wall at one entrance to the village, flooding another with water, and training the local villagers, will ultimately succeed in protecting the small town. And we are not disappointed with Kurosawa’s depiction of the martial events. But the richness of this film is not in its depictions of battle, but how these timid villagers gradually are transformed into men able to better control their own lives.


As the wise village elder attempts to explain, farmers are always living in fear: the fear of no rain or too much, the fear of cold and hot, the fear of famine, intrusion, erosion, etc. As Kikuchiyo reveals, every farmer has a hidden cache of food and other riches simply to protect themselves in times of crisis.


If their warrior saviors are more open-minded and appear far braver, it is because they have not been whipped into subjection. Accordingly, it is the differences between these two worlds which Kurosawa is more interested in exploring. The barbarian invaders, just as in Cavafy’s perceptive poem, are simply a solution to the villagers’ own problems, their inability to  put away their fears and act. It is the samurai, like a kind of human Trojan horse that the villagers have invited into their village, who must help them to see their own power. And is the motif of the “outsider/insider” dichotomy that dominates this film.


A culture that is completely inbred, so the director hints, is far more dangerous than one which is pillaged or sacked; all of the great cultures of the world have depended upon the “outsiders” to bring them the diversity and richness of other viewpoints to their doors. In a very true sense, even the hordes of bandits offer this isolated world the possibility of growing in maturity and coming to solve their dilemmas.


If in the beginning of this saga Rikichi is represented as a kind a fool, a man desperate to act only because his wife has been raped (in the true meaning of that word, “stolen away”), by film’s end he becomes a kind of wise man who realizes that no world can truly survive without enacting its own destiny, which includes opening its doors to others. Or, putting it another way, as the samurai themselves see it, “By protecting others, you save yourself.”