Kurosawa’s 1965 masterwork, Red Beard, based on a group of short stories by Shūgorō Yamamoto, is, accordingly, episodic in its structure. But it is all also, oddly enough, a kind of epic, running for 185 minutes and with a full musical interlude; but unlike the large epic Hollywood westerns (a form that Kurosawa also was attracted to) or the biblical dramas so popular of the 1950s and early 60s, this work is an epic, hard to imagine, about the late 19th-century medical profession. One might even describe it as an epic about dying. And, even more unusual, its major narrative strategy is wound around a series of death-bed confessions.
If you think this film might be problematic for those very reasons, however, you would be mistaken. The adventures of the young Dr. Noboru (Yasumoto Yūzō), who feels he has been mistakenly assigned to the rural medical commune run by Dr. Kyojō Niide (Toshiro Mifune, in his last film with Kurosawa), are utterly fascinating, as the bitter young man slowly grows to see his profession less as a way to gain high position—Noboru, who studied in a Dutch medical school, had  hoped to be the personal physician of the Shogunate—than to help the poorest among him to survive and die. 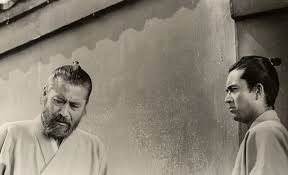 Niide’s methods of doctoring might be described as something closer to involving the spiritual than medical operations. Yes, the run-down clinic/settlement house he runs, is kept sparklingly clean, and its doctors, living in almost Spartan conditions, are asked at all time to wear medical uniforms, and when needed he does perform operations that seem to be far ahead of some 19th-century hospitals; but, more importantly, the skeptical head doctor realizes that those down and out, literally “smelly” folks for which he cares, more often simply need to be heard, given something to eat, and allowed the peace to properly end their lives.


The various “confessions” that the film’s director weaves together include a mad woman, nicknamed “The Mantis,” (Kyōko Kagawa), who has killed a husband and two lovers who attempted to sexually approach her, and who almost kills the proud Noboru; an old man Rokusuke, who dies of heartbreak after his wife leaves him for a younger man and whose daughter, forced to marry the same man, rejects Rokusuke’s offer in friendship in later years; a beloved neighborhood hero Sahachi (Tsutomu Yamazaki), who, after his own wife kills herself, spends the rest of his life trying to help out everyone he meets; and a twelve-year-old girl, Otoyo (Terumi Niki), whose internment in a local brothel has so thoroughly traumatized her that she will allow no one to touch her, and spends most of her time scrubbing floors.


The Otoyo story, based on a Dostoevsky novel, is perhaps the central one, since it involves her cure by caring for Noboru after his attack, and her allowing a young boy, who steals food from the clinic kitchen to help feed his family, to escape, and, later, secretly bringing him food that she herself doesn’t eat. When the boy is finally caught stealing from a merchant, his family determines to kill itself en masse by consuming rat poison.


If Kurosawa’s central figure, Noboru, begins this tale as a selfish rich-boy, under Niide’s (nicknamed Red Beard) guidance he learns that the only thing a doctor can truly do to ease the suffering around him is to care, listen, and watch—the kind of doctoring that used to be practiced before it became a business of ordering diagnostic tests and issuing pills. And in that respect, this movie has something far more important to say to us today than its characters’ sad tales of servitude and poverty might constitute. Niide and his staff surely saw themselves more as priests of the human soul rather than the medical technicians we consult today.


The confessional act, accordingly, is absolutely appropriate to Kurosawa’s theme. A daughter who has rejected a father, a husband who has unwillingly helped to kill his wife, a beautiful woman who, after being raped, cannot resist killing off her admirers, and a young child who, beaten and raped, finds it hard to communicate, all enter Niide’s humble church-like space to help relieve them from their suffering. Using a mix of shocking truths and gentle lies, the priest-doctor Niide helps the patients who might otherwise have nowhere else to turn in order to comprehend what has happened to them. Is it any wonder, in the end, that the young doctor Noboru, when finally called home, determines to stay on? He has found a calling in which he thought was simply a career.
Los Angeles, August 12, 2107
Posted by greenintegerblog at 8:44 AM