a kind of nun
by Douglas Messerli 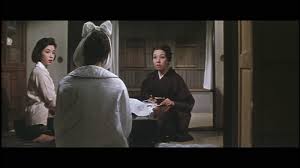 Most people in Gen’s situation—with a penurious father (Masayuki Mori) who spends most of his life separated from the other family members as he writes hidden away in his home office, a rheumatoid mother-in-law (Kinuyo Tanaka) who does little housekeeping, yet has plenty of time to gossip each day with her fellow religiously-inclined friend, and a younger brother,  Hekiro (Hiroshi Kawaguchi) who shoplifts before going on the racking up debts in the local billiard hall and riding a horse to its death—would have left this dysfunctional family at the very first opportunity. Instead, Gen (Keiko Kishi), a beautiful high-school student, is forced to return home each day to clean house and cook meals, and spends the rest of her little free time caring for her almost criminal brother, paying off his debts and attempting to parent him in the absence of any help from her father, who dotes on his son, and the ineffectually complaining mother. Throughout the film she is forced to travel from police station, to gambling halls, to a horse rental service, testifying to her brother’s best intentions while he mostly teases and mocks her devotion.


Gen must even fend off the attentions of a parole officer who uses Hekiro’s bad-boy  behavior as a way to attempt to seduce the young woman. The only man who shows her any real signs of love, a poor local factory workman, is scared off by Hekiro and his gang.


In Her Brother the great Japanese director, Kon Ichikawa, is not so much interested in the “story” of this family’s life as he is in studying their dynamics, where, in the patriarchal system of the day, everything centers around the youngest boy’s well-being and his father’s solitude.


Ichikawa’s greatest films have to do with large moral battles, and even his later domestic drama, The Makioka Sisters, is epic in the complexity of the sisters’ family life and their importance in the culture in which they live.


Her Brother, however, is a far more tepid expression of family life, focusing, as it does, on Gen’s near-saintliness, and family healing after the young center of their attentions, Hekiro, slowly dies of tuberculosis. By the time of the boy’s death, Gen has seemingly lost her youthful beauty, having had to transform herself into the unappreciated third parent, willing even to share Hekiro’s dishware which might likely lead to her own infection with TB.


Yes, Ichikawa’s beautifully filmed work, subtly expresses the difficulties of being a woman in this period of Japanese society, but Gen is hardly represented as a model of any rebellion against that world. And, finally, we can only suggest that, in her meek obedience, she has brought the tragedy of her life upon herself.


Only in a few instances do we see that she has a spark of self-recognition that might carry her away from the smothering world in which she lives: a moment when she triumphantly hits the  billiard balls, blushes at the attentions of the young factory worker, or rails against Hekiro’s lecherous parole officer.


Most of the time, however, like the last hours of Hekiro’s life in which she ties a ribbon between his arm and hers so that he might awaken her to “celebrate” for one last time, she willingly ties herself to his life. If we are saddened by this would-be juvenile delinquent’s death, we also celebrate it, while doubting that Gen will ever be able to discover a more fruitful way of living. As her religiously obsessed mother-in-law might have wished, she has already become a kind of nun.


It is hard to imagine why this film was remade in 2010 by Yoji Yamada, even though it was seen as a celebration of Ichikawa himself.