Noel Black’s 1968 film, Pretty Poison, was critically loved by most film reviewers, but was absolutely hated by its female lead, Tuesday Weld and many theater-owners. 20th-Century Fox could not, at first, even find a New York venue and the film was shown eventually at a small theater, becoming a flop, despite praise from Pauline Kael, Rex Reed, and several others. 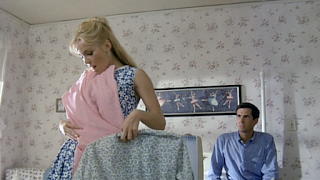 As Dennis Pitt, Anthony Perkins plays a disturbed young man who, as a teenager, burned  down his home without knowing that his aunt had returned home to die in the fire. That doesn’t mean that, after many a year in an institution, he is not a bit psychotic. Indeed, he reminds me of the lead character in Alan Rudolph’s Choose Me, who like Dennis, is released from a mental institution perhaps not really ready for the real world, and still definitely a bit “crazy,” although in the Rudolph hero seems primarily crazy for love.


Even though Dennis immediately disobeys his probation orders by refusing the lumber yard job to which he’s been assigned, we still see him as an affable young man, who is attracted to a blonde drill-marching high school beauty, Sue Ann Stepenek (Weld), and his anger that the small chemical factory in which he is working is highly polluting the nearby waters will win over any of those who care about the environment.


True, he attempts to attract Sue Ann in a highly eccentric way by pretending to be a government spy, and peppering his sentences with the clichés of the genre. But when it works, we perceive that the young straight-A student has long been ready for adventure as well, and we go along with this odd pairing.


It is she, moreover, who not only is ready to play along with his quite obviously hokey game-playing, but pulls him immediately into a sexual relationship of which he, much later, wryly observes: “You do have quite a capacity of loving.”


More than the man it is clear that what Sue Ann loves is her independence, which little by little she uses Dennis to get. But even this, at first, seems almost natural, since her mother
(Beverly Garland) often abuses, her with temper tantrums and slaps. 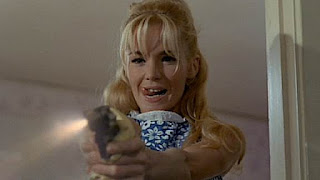 The couple’s first “caper” involves an attempt to disconnect the series of chutes which carry the chemicals into the stream next to which the factory sits. During their actions, however, the  night guard suddenly appears and is accidentally killed. Dennis, who had known the guard, is at least sanguine, but Sue Ann immediately makes sure that the fall has actually killed him, assuring Dennis that his body is in the stream, after she willfully relieves the victim of his gun. They’ll think that he died with the chute’s fall, she proclaims, ordering Dennis to hide in the woods while she goes off to her the hygiene class.


A short while later, she insists that he take her off to Mexico. When Dennis arrives, she is busy packing, calmly deciding which dresses to take with her, as she is delighted now that the true adventure will begin.


When her mother returns earlier than expected she, she almost blandly insists that he kill the older woman; and when Dennis cannot commit the act, she takes up the gun and calmly shoots her mother dead, while Dennis, clearly disgusted by the turn of events, vomits into the nearby bathroom toilet.


Knowing that she will be believed when she claims he has done the deed, Dennis admits to the crime, the weeping Sue Ann recounting how he has forced her his way into her life and taken her hostage.


Even Dennis’ probation officer knows there’s something wrong with this picture, but Dennis refuses to tell the truth, simply suggesting that the agent, Azenauer (John Randolph), keep an eye on her.


Fortunately, he does. For at film’s end we see her flirting with another young man to whom she reports that the people who have taken her in after her mother’s death won’t let her go out  much at nights, presumably planning through this new acquaintance to do something about the situation.


Pretty Poison is, in many respects, a kind of mix between Godard’s wild couple of  Pierrot le Fou  and Arthur Penn’s Bonnie and Clyde. But unfortunately, the year in which was released saw the assassinations of both Robert Kennedy and Martin Luther King Jr., which surely made Hollywood executives wary of promoting such a comic presentation of murder. In the years since, fortunately, this film gradually found its audiences, becoming almost a cult classic.