BEING HERE
by Douglas Messerli


Watching Akira Kurosawa’s impressive 1957 film version of Maxim Gorky’s play The Lower Depths the other day, I was reminded of my first encounter with this drama on a filmed production of the play on TV, which I must have seen in the very late 1950s or, more likely, in the early 1960s. Yet, when I went to look it up on internet connections, I could find no sign of it, no matter where I looked. So much for the “golden age of TV,” which, of course, we know is long gone, but now is also evidently utterly forgotten. 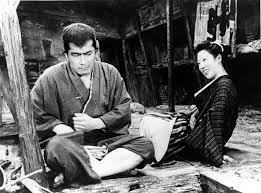 I even wrote a Facebook note to my 3,000-some friends, asking for any confirmation of what surely cannot have been a made-up memory. I had never read the play and yet I remember it so fondly, despite its dark, dark themes and images. I suppose I might have loved any theatrical event, since in the eastern Iowa I had few other opportunities to explore the theater that I so very much loved.
Fortunately, we have wonderful versions of this work on film, including Jean Renoir’s 1936 version and Kurosawa’s translation of Gorky’s drama into Endo (19th century Tokyo).
In some respects, Kurosawa’s damned, poverty-stricken untouchables are even worse off that Gorky’s poor peasants, who inhabit the denizens of the Bugrov Homeless Shelter near the Volga. In the Japanese director’s world the scum of the earth—prostitutes, drunks, gamblers, aging actors, tinkers, and others who have nowhere else to go—are gathered into a pit of what seems to have once been a grand house, hallowed out into tiny closets where they live, if the communal world of noise and violence can be described as a way of living.
Indeed, one of their group, Asa (Eiko Miyoshi), the tinker, Tomekichi’s wife, is dying while he continues to hammer out a pot, causing everyone to suffer through his endless actions. Even though they seem to be a group of survivors, they all know they are also near death, to be killed at any moment like the thief,
Sutekichi (the always magnificent Toshiro Mifune) or the drunks who play cards while waiting around for their next drink, provided by a few pennies from a friend or benefactor like Sutekichi.
They also know that the society above them, the “out there” of which they constantly speak could care less about their existence, a fact which the director makes clear from the very first moments of his film, where we move down the ravine from a stand of beautiful trees where the wealthy live to a Buddhist retreat below, who readily throw their slops into the pitiful encampment of those locked away in the “in here” existence.
But even “in here,” those on top of the society, the landlord and his truly nasty wife Osugi (Isuzu Yamada), attempt to recreate the societal divisions of the world “out there,” giving their love to, as she does, to Sutekichi, while continually demanding the rent of a few pennies from the rest. The structure that destroys these people on the “outside” exists “inside” as well. And it is Osugi’s machinations that determines the thin plot of this story, alternating between her jealousy of Sutekichi’s attentions to her sister, which leads to her plotting for her former lover’s downfall.
Gorky’s drama, however, was never about narrative, in the traditional sense, but about the narrative of numerous broken and destroyed lives, lives made impossible to even live by the society at large. The fact that Sutekichi ultimately is caught in his own web of deceit and actual validation of his humanity hardly matters. It is the little gestures this downtrodden society gift to their fellow sufferers that truly separates them, “in here,” from those “out there.”
The candy seller, Otaki (Nijiko Kiyokawa) offers up a small fortune of candy to the dying Asa. The actor who tragically can no longer remember his lines (Kamatari Fujiwara) plays out a dramatic role, as Keiko McDonald and Thomas Rimer have made clear, performing from the michiyuki tradition, as he walks his “lover” to her death, reveals his caring and charm. Even if he cannot recall his lines, he can relive the Kabuki gestures.

Sutekichi gives some of his ill-got gains to the drunkards to help them get through just another day. And, most importantly, the new guest to this hellish world, the pilgrim Kahei (Bokuzen Hidari) offers something to everyone, a dream of afterlife to Asa, a possibility of recovery and memory to the actor, and even possible redemption to Sutekichi. If some don’t have much to give, they offer, at the very least, their companionship. And even the seemingly uncaring tinker, after his wife dies, offers his suffering in her memory. In Kurosawa’s musical-comedy rendering of Gorky’s so very sad tale redeems the social world at the very bottom of the culture, and suggests that it is far more giving and even resilient than the social structures who have demanded their destruction.
If Kurosawa’s film reveals an ugly cancer of the society at large, within this small community of the dying sufferers, there is, at every moment, a sense of possible relief, a loving of being, the possibility of true forgiveness. And, particularly in this director’s vision, there is always a great comic possibility as the universe seemingly pushes out to destroy them: commenting on the shocking suicide of the actor, the gambler sarcastically but brilliantly comments: “It was such a great party. Then he had to go and ruin everything.”
Obviously this world is already in deep ruin; no sliding door can fully close, the shreds of cloth that others have used to close out the terrible noises of their hell can’t keep them safe. But their illusions are all that they have. Why go and spoil them, the realist gambler seems to be saying. Isn’t that what we all survive on—even at the top?

Posted by greenintegerblog at 3:24 PM