It’s a bit hard to comprehend what director Marek Kanievsky or the original playwright, Julian Mitchell, are actually trying to say in Another Country. It appears, at least from the opening scene, that in telling his story about his Eton years in the 1930s, British-born Russian spy Guy Burgess—in the film called Guy Bennett—is somehow explaining why he became the notorious spy he has become. But despite all appearances, it seems fairly ridiculous to blame it all of Bennett’s inability to become one of the head prefects, called “Gods,” at his institution, as the reason he has turned against democracy. 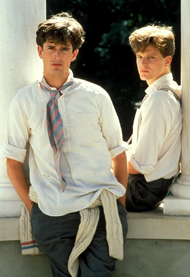 Certainly, conditions in the wealthy school were not truly democratic. Kanievsky goes out of his way to show us a repressive and snobbish school society that, at moments, looks very much like the Soviet Kremlin-controlled world. The youngest of the schoolboys are forced to polish lamps, shine boots, and do the most menial of jobs. But even the older schoolboys, played by actors who are far too old to really be called schoolboys, are subject to the whims of the “Gods” and intrusions of their teachers. And this schoolboy nightmare world, like Bennett’s home, is obviously “another country.”


Clearly, the only joys these boys have are of the sexual kind—mostly with one another. But we know that, just as have their fathers, most of them will grow up to be brutal and self-controlled heterosexuals in the manner of those portrayed in fictions by Evelyn Waugh, E. M. Forster, and others. All well-educated British schoolboys simply went through such a seemingly “homosexual” period in their lives. Those who didn’t grow out of it, like Forster, Alan Turing, and thousands of others were threatened with exposure and imprisonment.


Guy Bennett (Rupert Everett) is most definitely gay, and has evidently had sex with nearly all of his peers except his best friend, Tommy Judd (Colin Firth), who, as a Marxist, is apparently more interested in politics that sex; that does not mean that Bennett does not try get him into bed. Everett plays Bennett with great panache, and Kanievsky’s beautiful scenes of him and other beautiful boys, particularly the somewhat younger, James Harcourt (Cary Elwes) give the film, at moments, the quality of a James Ivory movie, a pretty-to-look-at box of historical accuracy.


Given the nastiness of the feudal order of the school, however, it is difficult to comprehend why Bennett should ever aspire, himself, to become a “God,” or for that matter why it should so destroy him when he is passed over, primarily for his homosexuality. With the young Harcourt, Bennett seems so romantically inclined—the young couple mostly sitting on boats, Harcourt’s head laid upon Everett’s handsome body—it is hard to imagine that what he is truly seeking is power. Perhaps the director and writer, somewhat subtly, are alluding to the attraction of many German homosexuals, during the same period, to Nazism.


Bennett’s behavior is so “out there,” that it is no surprise that, after the young masturbator’s death, the “Gods” are out to punish him. He escapes the cane by threatening to tell that nearly every one of them has enjoyed his company. Only when the young Harcourt might be “outed” does he accept his punishment.


How he went from his desire to “rule” the other boys to become a diplomatic spy is never explained, only intimated to the above. The Marxist, meanwhile, so we are told in the epilogue, has gone on to die in Spain, fighting for Spanish democratic cause, suggesting, perhaps, that they both went in different directors than what seemed to be their natural courses.


If nothing else, we recognize that a dictatorial education surely leads to desire for just such a world as an adult. But then, Robert Musil, had shown us that, far better, in his 1906 novel, The Confessions of Young Törless.