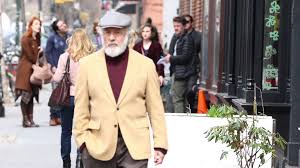 After several quite edgy films, director Noah Baumbach has discovered a softer tone and method to get to the core of his vision of neurotic New York family life. At the heart, or perhaps one should say “selfish center” of the Meyerowitz family is the self-engrossed artist father, Harold (Dustin Hoffman) (clearly another stand-in for his own writer- father, Jonathan) who has been married 4 times—well, he demurs, the first was annulled—producing with his various wives three children, two of whom are loveable but total social failures. Danny (Adam Sandler), son of a wife played by Candice Bergen, is a former music composer and performer, who has abandoned his career for unclear reasons, but has still managed to raise a beautiful young daughter, Eliza (Grace Van Patten), off to Bard College, where Harold has previously taught. His sister, Jean (Elizabeth Marvel), is so retiring and seemingly permanently “scarred” (we later discover at least one reason for her condition) that she almost reminds one of Bette Davis’ character early on in Now, Voyager—except, in this case, without the possibility of a ship voyage cure.
Their half-brother, Matthew (Ben Stiller) put his neuroses to work far more successfully as a Los Angeles-based business manager (a kind of heavy-weight agent). His mother, Maureen (Emma Thomson) is clearly an ex-Bard student herself, trying, quite unsuccessfully, to the play the role of a good housewife (the dinner of nearly raw shark she cooks represents the disasters of her housekeeping attempts). Besides, as Danny and Eliza arrive at Harold’s door, Eliza on her way to Bard and Danny, planning to stay on with his father, until finds another career, Maureen is off to a retreat to rest. Given what we soon discover about Harold and his self-obsession, mostly expressed in one-line zingers of hostile judgment, we don’t blame her.
Harold feels ignored. At one time The Whitney even bought one of his works of art (now seemingly lost in their storage space), but in his old age, seemingly, no one is interested in his quite obviously late modernist sculptures. His Bard colleague, on the other hand, is currently having a retrospective at MOMA, an event he begrudgingly attends with Danny, resulting in several hilarious vignettes, including a rather meaningless encounter with Sigourney Weaver and with a former woman acquaintance of Danny’s, which given his separation from his current wife, briefly allows him to imagine he might still be able to find another relationship; besides Sigourney has said hello to him. 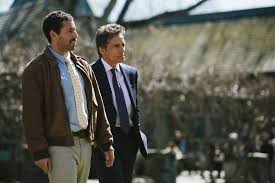 In order to bring his comedy-drama into full play, Baumbach must find an excuse to bring these suffering folk in touch with their younger brother, Matthew, who flies into town on business, necessarily stopping by at his father’s house. A sudden partial heart-attack or stroke, suffered by Harold, forces the family to interact once again, poignantly and rather comically forcing them all to live out their jealousies and life-time hurts. Harold imagines that his best-loved work was created with his son Matthew at his feet, but we gradually perceive that it was the neglected Danny who was his true muse. Jean recalls an childhood incident when a friend of her father's masturbated in front of her.
But, it actually turns out, the successful Matthew, having also broken up his marriage, is the unhappy of them. His life has been built on deal-making, and he is attempting to make yet one more deal by selling his father’s house and art to a gay couple, desperate to “move up” to the lower East Side.
For those living outside the 1000 zipcodes, much of this tale may seem a bit incomprehensible. How might Danny allow his daughter to make a kind porno-satire like her “Pagina-Man”; and who might have doctors, who in the middle of caring for a patient, suddenly decide to go on vacation? Who attempts to lunch on expensive steaks, yet before the meal comes, determine to leave, outraged by the  waiter’s and other diner’s behaviors? Who might demand a copy of Thomas Mann’s Buddenbrooks back from their ex-wife? Yes, Baumbach’s comic routines—playing out something like a series of riffs—seem, perhaps, more at home in the pages of The New Yorker or in a J. D. Salinger fiction than in the movie theaters (particularly if you ignore the films of Woody Allen).
To me, strangely enough, a man directly out of the Midwest, who lived in Manhattan for only a brief year, The Meyerowitz Stories (New and Selected) seemed so pitch-perfect that I couldn’t help comparing some of these incidents to some of my New York friends’ lives.
And yes, Baumbach’s characters, as in all of his movies, are cynical beings who see themselves in terms of larger-than-life figures. But that is, alas, all they have left of themselves.
Any director who can get such marvelously crafted performances from, not only the almost-always brilliant Hoffman, but from Sandler (a revelation), Stiller, and newcomer Van Patten is simply a genius. And his softer, more forgiving treatment of these somewhat cartoonish-life figures is only to be commended. This is a movie I will see again.