William Dieterle’s 1950 melodrama, Dark City, one might argue, is a grade B movie with a grade A cast. With the go-to noir actress Lizabeth Scott, such 1950s regulars as Viveca Lindfors, Dean Jagger, Don DeFore, Jack Webb, Ed Begley, and Harry Morgan, and with new-comer hero, Charlton Heston (in his first Hollywood film), how, one wonders, could this movie have failed? 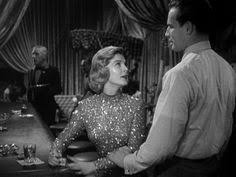 Well, we might begin with the plot. It’s overly simple: an upright business man accidentally falls in with some petty criminals—Heston and his gang run a often raided bookie joint—Arthur Winant (DeFore) gets hoodwinked in two nights of poker games, losing, in the process $5,000 of his company’s money. Shamed by his own behavior, he hangs himself. And for the rest of the movie, Winant’s “crazy” brother stalks Danny Haley (Heston) and his gang (Webb, Begley, and .Morgan).
Ulcer-sufferer Barney (Begley) is the first to go, and the police (represented by Jagger) suddenly realize that, somehow, Haley’s gang is involved in Winant’s death. The others spend their time simply trying to survive, Soldier (Morgan) speeding off to Las Vegas, and Augie (Webb) nervously following his boss to Los Angeles, just to get a picture of the “crazy” brother who’s after them. Augie is the second to go. And, oh yes, Haley loves Fran Garland (Scott). It’s hard to keep such a simple plot going, let alone spinning it out into interesting scenarios.
Scott, dressed in slinky gowns while lip-syncing several torch songs, does her very best, while trying not to show how much she’ll do to hang onto her wary lover (there’s a momentary back story that suggests Haley lost his first, European-born love during World War II). Composer Franz Waxman whips up a first-rate score, almost as if he were composing for a Hitchcock film. And cinematographer Victor Milner stalks his figures through the three dark cities they inhabit, just as if he were truly filming a great noir. Even the usually sunny-white Los Angeles Union Station glowers threateningly under Milner’s camera.
But the German-born director, William Dieterle, was never much known for his subtlety nor adventurousness, even though, during the 1950s he was briefly suspected for having Communist ties, particularly since he was a friend of Bertholt Brecht; and he struggles, white gloves (which we usually wore to work so that he wouldn’t get mussed) on hands, to create a noir, in this case, while basically asserting Haley’s inner goodness. He does truly love his torch-singer girlfriend, and even falls, temporarily, for Winant’s widow and young son. Even the police try to save him. And in the end, hardly the making of a true noir, Haley is saved to return to the woman he loves.
When a movie begins with a chiseled-face hero walking down the credits with a ribbon-bound box within which sits a stuffed Easter-rabbit in it, you know you’re not in noir country, but have instead entered a darkly-lit melodrama, closer to Agatha Christie’s Ten Little Indians that Heston’s true noir, Touch of Evil. Nothing wrong with that, of course. But it might have been so much more interesting if the director had got his hands just a little dirty.

Posted by greenintegerblog at 9:26 AM