HOW TO COPY LOVE
by Douglas Messerli

Perhaps coincidences are simply the mind perceiving links between things that otherwise might not be connected, but I couldn’t help being surprised that after watching Dreyer’s film Gertrud, sent to me by Netflix, on Saturday how much of significantly related to my Sunday viewing of another Neflix film, Copie Conforme (Certified Copy) by Abbas Kiarostami.
Starring the English opera Baritone, William Shimell (with whom Kiarostami worked in directing Don Juan) and the director’s long-time friend, Juliette Binoche Certified Copy concerns an arts and culture writer (Shimell) who, after giving a lecture about his new book, Copie Conforme, meets up with an antiquities dealer who takes him on a drive through the Tuscan landscape, visiting a small village where many working-class Italians come to get married, in part because of a small, sacred tree.
Shimell’s character, James Miller, argues, in his new book, that there is no really important difference between an original object of art or a copy, and that neither intrinsically has more value, the copy sometimes being more beloved that even the original which our culture has taught us to see as being better and of more value. The difference between a household object, such as a soup can and its reproduction by an artist such as Warhol is merely the place or context in which it is presented. Even da Vinci’s Mona Lisa is not really an original since it is a portrait of Lisa Gherardini, the original in this example. 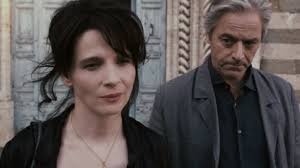 She (Binoche’s character) is not entirely convinced, but is clearly interested in that author and his ideas. And Miller, himself, seems filled with contradictions, having written his book, he admits, to convince himself. He speaks out for the centrality in human life as being simply pleasure, but as the two encounter the lush Tuscan countryside, he seems only occasionally to notice the beauty of the place, and, at one point, when Binoche reappears from a bathroom, having put on lipstick and a pair of earrings, he seems entirely oblivious. When she takes him into small local museum to show him what was once believed to be a Roman painting but was discovered in the 20th century to be a fake, which, since the museum has still determined to display the work and explain its provenance, represents an instance that might indeed prove his theory, he seems only vaguely interested. 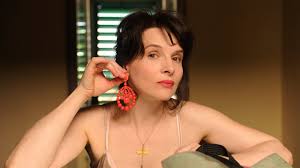 In fact, he appears to be considerably closed off from the world around him, almost dismissive of the dewy-eyed and brides and grooms around them. While She speaks English, French, and Italian fluently, he speaks almost entirely in English, although we later discover that he does know French.
The further they go in their travels (he must catch a plane by 9:00 that evening), the two, at first appearing to be footloose strangers, gradually begin to bicker like a married couple. At a small café, when Miller briefly goes outside to take a cell-phone call, the waitress presumes they are a married c and, after asking a few questions of Binoche—who plays along with the woman’s apparent misapprehension—begins to philosophize on the state of marriage, arguing that while women simply want love, men must have work to feel meaningful, and therefore, they must be forgiven for their inattention to what is truly most important in the world. Yet, Binoche’s “She” clearly would like to simply have the loving support of his husband rather than his determination to seek fame and a kind of power, later expressing her feelings by showing him a rather kitsch sculpture in the town’s plaza of a man and a woman, she with her head on his shoulder and he with his arm around her, offering up love and protection.
Many critics have argued for Kiarostami’s borrowing, in this film, from several of the early 1960s films, Rossellini’s Voyage to Italy, in particular, but also L’Avventura and later works such as Before Sunrise and Before Sunset. I believe they’re right. But, after the scene I just described above, and after having just seen Gertrud I’d posit that Dreyer’s film is far more central to Certified Copy since the idea that love is more important than anything else is the central theme of both works.
More importantly, from this moment on things quickly begin to shift. When Miller returns to the table he tells of a moving story of how, when staying in Florence he daily observed a woman with a son, she always walking far ahead of the boy, but stopping every so often to look back to discover his whereabouts. Indeed his book first suggested itself to him when the pair one day stood before the copy of Michelangelo’s David in the Palazzo Vecchio (the original had long before been moved into the Galleria dell'Accademia to protect it). In the middle of his tale, he and we simultaneously both realize that the woman and son he is talking about is none other than his table partner; and we have seen her play out the same scene in the streets of Arezzo that very morning. A tear falls from her right eye, as she responds, “I was not well in those days.”
Even more importantly, when she tells him of the waitress’s mistake about their relationship, they even more emphatically play out their relationship as a true couple, arguing about events in the past and numerous other issues. Suddenly the audience can only perceive that they have been a true married couple all along, now living separate lives with long periods between their encounters.
Most critics have wondered which of the two realities proffered is the truth (the original) or play-acting (the copy). Of course we can never be sure, and that’s precisely Kiarostami’s point. But I’d bet on the film’s ending being the original as opposed to the copy of their first meetings played out in the earliest scenes. First of all, her 10-year old son (Adrian Moore), who seems precociously aware of her excitement about seeing Miller almost gives away part of the later plot, by saying he’d like to see the man also, suggesting that he knows Miller is his father. 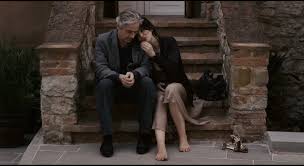 Moreover, there is the very fact that these “strangers” immediately seem comfortable with one another, and not at all wary of taking a Sunday drive into the countryside in her car.
But the fact that gives the truth away is that she has been reserved a front-row seat in the very first scene, sitting next to Miller’s translator and feeling absolutely comfortable to be there, able to whisper about her hungry, acting-up son with the translator while Miller is speaking.
In this case, the original (the truth about their already being a couple) is preferable to the copy (a play-acted version of starting over again) for when She takes him back to their honeymoon hotel in the same town they have been visiting, Miller finally does give into at least one more moment of pleasure with her, staying on instead of leaving as he originally intended. If the two do have a sexual rendezvous, he perhaps may not even make his plane.
Of course, Kiarostami has traveled this territory before, particularly in his 1990 film, Close Up where a character pretends to be the director himself, temporarily tricking an entire family. And he has played with this idea as well in his 1997 masterwork, Taste of Cherry, where the suicidal hero is revealed, at film’s end, as performing in the movie which has just told his tale.
His 2010 film, within this context, does not seem so very “labyrinthine” as many critics dubbed it, as it is a moving comedy-drama about how a couple finds a way back to each other, even if only for a few hours. If, in the future, the central character may find herself, like Gertrud, all alone, living almost as a hermit, she has spoken out for the original, the real love, which they once felt for one another.