And now these three remain: faith, hope and love. But the greatest of these is love.
Corinthians 13: 13

Carl Theodor Dreyer, despite his often painful investigations into religious fanaticism, might also be described as the Scandinavian author closest in sensibility to the Austrian fin de siècle writer Arthur Schnitzler. Underneath the dire examinations of La Passion of Jeanne d’Arc, Ordet, and Vredens is a man completely accepting of human sexuality and a director with strong gay and feminist perspectives in his oeuvre, particularly in his 1924 film Mikaël based on a novel by Herman Bang and his last work, Gertrud, based on a play by Hjalmar Söderberg. In both of these works, love and its loss are the central themes, but as in his Joan d’Arc film, it is passion, more that even love, that is essential t—and this despite his heavily Nordic sense of control and, reportedly, almost dictatorial rule over his filmmaking procedures. Even in the cruel religious world of Ordet women rule, and the sensuous wins out, ultimately, over cruel male-constructed restrictions.
Dreyer’s last film, indeed, owes a great deal to Ingmar Bergman’s representation of feminine-centered love in Smiles of a Summer Night—along with the regret and sexual acceptance of that film—but also presented through the lens of Ibsen’s All Doll’s House and Strindberg’s Miss Julie. Gertrud Kanning (the incredible actress Nina Pens Rode), however, is far cry from either the almost sexually abused Nora or the radical, but absolutely terrified, Julie. She is her own woman (already in 1906) who has had several affairs, particularly with the poet Gabriel Lidman (Ebbe Rode), perhaps with the writer Axel Nygren (Axel Strøbye), and now with the young, handsome pianist Erland Jansson (Baard Owe)—all for the search of true love. The only man she might not have truly not loved is her husband, the lawyer Gustav (Bendt Rothe), who in the very first scene is about to be appointed to the as a cabinet minister. 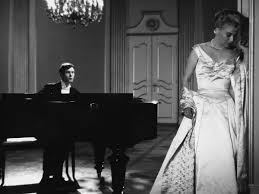 Although not afraid, like Schnitzler’s Hands Around characters to participate in sexual affairs, Gertrud is far more like the same author’s Bertha Garlan, who becomes determined to find an open love, in her case with a past friend who is now a musician. Like Gertrud’s passion for a pianist, however, it ends badly, with her, finally realizing, that men simply aren’t as committed to love as are women. Each of her lovers—representing, as Eric Henderson, writing in Slant quite brilliantly observers, a cube of inter-relating patterns of images and actions—is more interested in career, fame, money, and, particularly, in the case of her husband, power than they are simply in committing themselves to love. Love, she argues, again and again, must be the center of all things, as if restating Christ’s injunction that among all the things in the world, the most important is love.
If Gertrud is a completely sexual being, it is not truly sex she seeks nor a commitment to housewifery (she is, to repeat, neither Julie nor Nora), but to an open relationship with a man totally able to commit himself to her, just as she has to him.
As Strindberg and numerous other male writers have made clear, such a relationship is nearly impossible, and each of her lovers blame her intractable commitment to that goal as being the problem that is at the heart of their failures, and the reason behind her leaving over and over, the men to whom she has given her heart. 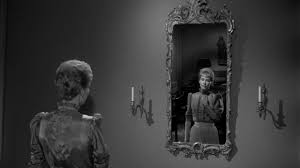 They all claim that they still love her—after all, she is a stunningly beautiful Aphrodite who, until the very last scene, never seems to age. Yet, none of them can seem to comprehend that in their utter shift of focus to their personal lives and career perspectives, it is they who have left her, not she who has left them. By the middle of this drama, the liberated Gertrud can only perceive love as a “great disappointment,” providing only a world of loneliness, a kind of series of linked dreams (again a reference to Strindberg)—but still will not and cannot imagine giving up her search. She has, after all, already given up a promising career as an opera singer! And now she embarks on a career as a psychologist in Paris.
Dreyer correctly recognized that this turn-of-the-twentieth century drama was, indeed (even in 1964) entirely modern in its message. Yet the way he chose to tell his film, in intense, long dramatic verbal interchanges between, most often, two and, sometimes, three characters, reeks of the stage. And his film was reviled in its early film reviews, particularly at Cannes, where half of the audience walked out. Given the new-wave films of the day, with their quick cuts and outrageous character behavior, Dreyer’s restrained living-room drama (despite the rich décor of those rooms) seemed like a static throwback to another era, and reminded many of the talky tradition of so many Scandinavian theater works and films—Bergman included. This did not seem like an advancement in cinematic art, which had previously been the way his films had been perceived. Many argued that this film represented his senility; he died four years later. 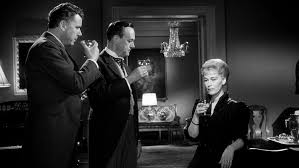 Yet, those audiences were, in retrospect, entirely wrong. One simply has to watch Dreyer’s film more sympathetically, and admire the beauty of it, to realize that this, perhaps, was one of his very greatest of films. If the long dramatic sequences of talk seem static, one only has to perceive that in the constant cuts between characters and, more importantly, their constant movements from couch to couch, from standing to sitting, from stalking the room, to patiently waiting out their interlocker’s comments, present a remarkable cinematic representation of their shifting roles and relationships with one another. The drama here does not lie entirely in the articulate dialogue but in their constant movements, up/down, across/over, and, always, as in Schnitzler’s famous La Ronde, around and around each other. These figures are constantly circling one another, expressing their desires and failures in their very indeterminate motions. They are a very nervous folk—despite all their professed assuredness in the positions for which they stand. 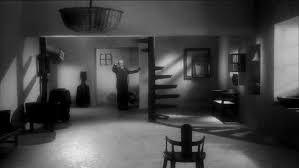 And then there is the incredible beauty of this film—not only in the sets, moving from the rococo, over-embellished rooms of the Kanning home and the even-more elaborate estate of the Danish semi-royals celebrating the return of the absurdly celebrated poet Lidman to the more modest design of Jansson’s apartment and, finally, to the almost Amish-like Danish-peasant-influenced rooms of Gertrud’s final digs—but in the breathtaking black and white shadows of cinematographer Henning Bendtsen, who Henderson correctly argues made “just about the most colorful black-and-white film ever lensed.”
Moreover, Dreyer presents all these tragically failed beings without judging them, simply allowing them their viewpoints without trying to represent which of them we might most despise. Even Gertrud, about to divorce her husband, defends him when attacked; and she, even when realizing that the man she so desperately loves, Jansson, sees her as merely an interesting interlude in his sexual life, wishes she could believe in God to pray for his protection. Dreyer clearly loves his characters more than they can love one another. And that very profound sensibility imbues this film with the values that its heroine so seeks but can never find in the world in which she lives. As director, Dreyer, truly put his heart into this beautiful masterpiece, showing us, without really commenting, why love, as Gertrud argues, is all that really matters.
When I’m discouraged—as I am (along with many more of us) these days—I now have a film to turn to, helping me to have the courage to move on, to believe in what is almost impossible to believe.