loving the best they can

Gus Van Sant (screenplay, based on Mala Noche: And Other "Illegal" Adventures by Walt Curtis, and director) Mala Noche / 1986
Instead of watching the annual National Dog Show on Thanksgiving morning, this year I viewed Gus Van Sant’s 1986 film Mala Noche, his first feature work, shot on a budget of only $25,000.
Yet this film, with its rich black and whites, its jazz-influenced cinematic rhythms, and its excellent lead actor, Tim Streeter, playing the handsome, comfortably gay grocer, Walt Curtis, the film does not at all have the look of a cheap budget piece—in part because it is mostly filmed on site in Portland’s Skid Row, a seedy area of town where Curtis sells candy, chips, cigarettes and liquor to the homeless and drunks when they can get together enough money to buy anything. His best friend, Betty (Nyla McCarthy) is a female stripper.
Perhaps the real reason Curtis has chosen to hang out in this part of town is his addiction to young homeless Mexican boys, and as the movie starts he’s just fallen for a long-haired, thick-lipped boy named Johnny (Doug Cooeyate), who has just hopped a freight train with his friend Roberto Pepper (Ray Monge).The two boys seem to have somewhat close relationship, which may or may not be sexual. But what is clear, once Curtis begins to move in on Johnny, is that the boy will have nothing to do with putos (faggots). 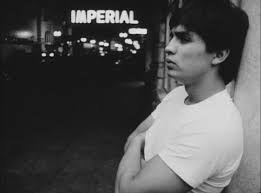 Refusing to give up, Curtis, with the help of Betty, invites the two boys to her house for dinner so that Curtis might have a chance to seduce Johnny, if not through his quite apparent personal and sexual charm, simply by paying him all he has ($15) to spend the night. Johnny demands $25, but Curtis is only a little better off financially than the boys, although we recognizes that his age, sex, race, language and having even some money gives him all the advantage over the two lost boys, who say they are 18, but as Curtis notes to another, are probably closer to 16. In short, he recognizes himself as a kind of predator, but simply cannot help himself. And, although these issues are certainly at play in Van Sant’s film, the director portrays Curtis (in real life, the writer of this work, who performs a small role as a poet named George) as so likeable and accepting of his role in life, that we might almost forgive his preying on these boys and others before them .
Unable to bed Johnny, Curtis offers Roberto (who has been accidentally locked out of the cheap dormitory where he lives with Johnny), a place to stay for the rainy Portland night, allowing the boy to fuck him and settling for what he regards as “second best.”
But even the recognition that Johnny will probably never accept his love doesn’t stop him for continuing to try to convince the pouting and volatile young boy of his love for him, sometimes with very comical results. And the rest of the film is spent in the three of them circling each other, as Curtis gradually begins to play a kind of likeable father figure, taking the boys on drives in the country in his beat-up car, teaching and allowing them to drive—sometimes with dangerous consequences—and slipping them extra money or providing free food, even allowing them on occasion to rob him.
When Johnny suddenly disappears, Curtis is devastated, and Roberto is stranded without any place to go, finally accepting Curtis’ invitation to live with him. Even then, Roberto is conventionally macho, refusing to have sex at any time but night, and forcefully resisting Curtis' daytime advances. He is brutal, insists Curtis, but “I guess he can’t help it, growing up as he has,” revealing some of his own racial biases.
Johnny finally shows up again, having been arrested, deported, and swimming the Rio Grande to get back to Portland. We might even wonder if he hasn’t returned to be with both his buddy and Curtis.
But in the interim, one the “bad nights” of the film’s title has occurred as the police, called to Curtis’ apartment building because a neighbor has spotted a strange intruder, who cautiously enter, terrifying the young runaway Roberto who, grabbing a gun, tries to make a run for it, to be shot and killed by the cops. Curtis, returning home from work, discovers the dying boy and holds him in a position that is similar to a pietà, realizing their shard human condition.
Upon his return, Johnny now seems willing to spend time with Curtis, but hearing of his friend’s death, accuses Curtis of lying and, after carving the word “puto” into his door, runs off, never to return, despite Curtis’ continued invitations and open invitation to come by. It is clear, after Johnny speaks to a young male prostitute, that he also will be forced into that dark world.
What is so remarkable about Van Sant’s film is not only the editing and beautiful cinematography by John Campbell, but the director’s absolute embracement of his characters despite their vagaries and flaws. As several critics have pointed out, Van Sant not only is totally nonchalant about their sexuality but refuses to judge them for their often outrageous behaviors. This is not simply a “gay” film, a work about a gay man, but a work that helped lay the foundation for what was later described as New Queer Cinema, rejecting the idea of societally normative attitudes of sexuality and behavior. There are neither saints nor even true sinners in Mala Noche, but simply individuals who try their best to get through many a bad day and night, often succeeding as much as they fail by loving the only ways they know how.
Los Angeles, November 24, 2017
Reprinted from World Cinema Review (November 2017).