Heidi Ewing and Rachel Grady | One of Us

Heidi Ewing and Rachel Grady (directors) One of Us / 2017

My husband Howard tells the story of the time he and other members of the Los Angeles County Museum of Art's Modern and Contemporary Department were leaving a restaurant meeting and were approached by a Hasidic man with two children. The father asked them whether they were Jewish; all were, in fact, but knew that what he was really attempting to do with his leading question was to talk to them about conversion to his sect. Even more disconcerting, as the youngest of his sons walked toward them, his elder brother warned him not to get close to these “outsiders.” One day, while I was leaving a large store, a similar thing happened to me. Los Angeles, after all, like New York, has several large Hasidic communities, many of them wearing traditional black garb with large fur hats.
A few years ago, I reviewed Paul Mazursky’s telling of his visit at the annual celebration of Hasidic Jews in the Ukraine, Yippee: A Journey to Jewish Joy, in which he presented that gathering as a joyful and happy affair. But after watching Heidi Ewing’s and Rachel Grady’s One of Us yesterday, we are forced to perceive the insularity and isolation of, at least the Brooklyn Hasidic, as hinting at a far darker view of this group, who have kept their identity and religious principles primarily by blocking themselves off from the rest of society.
To those who firmly believe, of course, and are willing to sacrifice their personal identities in order to sustain their faith, I am sure that such community closeness must offer great joy. But for those among them who question or doubt, life within such a community it may not only be stifling, but absolutely dangerous. 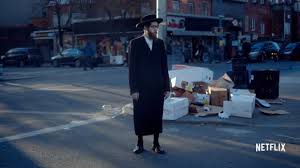 The film follows the attempt of three of the latter, Ari, Etty, and Luzer Twersky, to safely remove themselves from the world in which they have been locked away. Through the help of the group Footsteps the three attempt to escape the only world they have known. Two of them, Etty and Ari have been sexually abused and Etty regularly beaten by her husband to whom she was married at an early age without her permission, and who now has 7 children. Luzer simply wants to explore the vast “out there,” hoping to make a career as an actor. Ari also has drug problems. 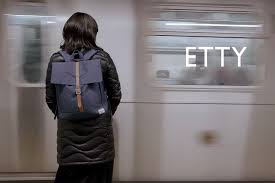 Etty’s tale is perhaps the most painful. For the first half of the film she has clearly asked the directors to shield her face, as she terrifyingly describes the situation to the police on a 911 call: “There’s people banging down the door. There’s adult men outside and I’m alone with my children,” she anxiously tells the operator. “They’re my husband’s family. The police just left a few minutes ago. They escorted my husband out and he called family and friends to bang on the door. This is very dangerous.”
Later Etty not only allows her face to be shown but describes the limited education that her children have received, with textbooks blacking out all images of women, and delimiting all information that does conform with the group’s faith. By the end of her gut-wrenching tale the lawyers hired by the Hasidic community have convinced the judge to take away her children, separating the children to various of her husband’s relatives, and grant her only a once-a-month  overseen, visitation.
But all of these three have a hard time of it. Luzer who lives out of an off-road camper, suggests that the group purposely isolates their members so that they simply cannot escape. They can’t know the world “out there,” and so are dependent on the group. It is clear that, even though he has begun to make a new life, it is difficult to adjust the changes his life has entailed.
Although Ari’s family seems in closer touch, and he finally does find a way to cure himself of his cocaine addiction, by film’s end he and we are still not sure how he might get on with his life. Uneducated in many ways, these individuals have few choices for getting good jobs.
We know that, because of their obvious dress and their insular lives, the Hasidic Jews were devastated by the Holocaust, and it is hard to blame them for fearing those outside their closed community. But as Ewing and Grady make clear in this probing documentary, they have now closed off their world almost as aggressively as the Nazis sought to close theirs. Keeping away from the rest of the world and locking up their sons and daughters into a dark closet of conservative denial has, perhaps, transformed a sustaining faith into a cult not so very different from the Christian fundamentalists the same directors documented in their previous film, Jesus Camp. At least these three individuals have now truly joined “us,” a world of almost impossible diversity.