Although it may sound ridiculously contradictory, Columbian director Ciro Guerra’s absolutely beautiful black-and-white feature, Embrace of the Serpent, is both a highly complex tale that covers a period of 31 years in the Columbian Amazon, with a rather simple plot that basically repeats the first half in its geographical territory and goal, if not character, although even there, both voyages are overseen by Karamakate (Antonio Bolivar, as the elder, and Nilbio Torres as his younger self), an Amazonian shaman who has left his tribe after seeing many of them die in a takeover of their land by rubber barons. 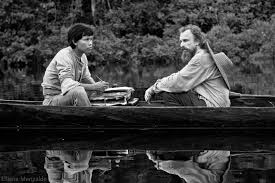 Karamakate lives alone in the jungle, and is evidently the last of his tribe to know where to find the rare (fictional) plant, yakruna. The first of the white-men who seek him out, the German scientist Théo van Martius (Jan Bijvoet), has come, with his servant-friend Manduca (Miguel Dionisio Ramos), to find a way to save himself from dying, having been told that only Karmakate can cure him.
Furious at all whites, believing that they have completely destroyed his tribe, Karmakate refuses, only temporarily prolonging the German’s life by blasting a hallucinogenic white powder up his nose. 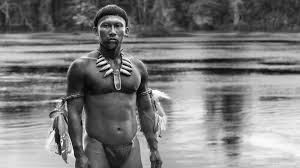 Finally, convinced by the bond between the native Manduca and Théo, he agrees to go on the voyage in search of yakruna, in part, to see if, as Théo claims, members of his tribe still survive. It may seem odd to describe this hallucinatory film as a “road movie,” but that’s what it is, as the trio encounter the terrors of the river and the wonders of the jungle, including a visit to a horrifying Spanish Catholic Mission, where the native boys are regularly beaten and abused by the priest, Gaspar (Luigi Sciamanna), for their “pagan” behavior. The travelers destroy the priest’s reign, freeing the tortured boys. Yet, they never quite discover their goal, and Théo dies in the “hell-hole” he has been trying to escape, although not before uncovering many of its wonders and sending his diaries back to Germany for eventual publication.
The second visitor, in 1940, to Karmakate is an American botanist, Evan, a far more selfish and venal being, who, having read Théo’s book, is seeking out the same drug for himself, since he claims that he cannot dream (my dear friend David Antin is the only human I know who has made this claim). We also discover later in the film that he is seeking out the drug in possible connection of securing a drug that might keep the rubber trees from disease, since US supplies from Asia has dwindled because of the Japanese occupation of World War II.
In short, his motives are far more questionable than Théo’s, and by this time Karmakate believes himself to be a chullachaqui, a hollow spirit who is losing his memory and is merely passing through without knowledge of the world in which he lives. He only agrees to take the voyage this time because of Evan’s love of plants and because he recognizes in the book Evan has (Théo’s work), the same rock markings that he has, himself, made for many years. But this time, it is Evan who must lead, and the trip is made for Karmakate’s spiritual revival, not for Evan’s—although the botanist has no conception of that fact.

Again, they encounter what is left of his tribe, and revisit what is left of the Spanish mission, in which the previously beaten boys have now grown up to become self-flagellating acolytes to a man who claims he is the messiah, who only accepts the two strangers into his company when they appear to be the Biblical Magi and when Karmakate temporarily cures the messiah’s wife. By the time they escape the madness of this religious commune, the messiah is demanding that his equally mad followers “eat of his flesh”—a demand that we can’t tell whether he means “literally,” as in a call for cannibalistic behavior, or is a call for sexual intercourse. The visitors have no choice but to seek a quick escape. Yet even here Karmakate demands that Evan given up all of his earthly possessions, which the American does, except his record player, in a kind of Herzogian desire to hear the cultural joys he will probably never encounter again. And music is essential in this film.
When the tree from which the drug is made is finally found, Karmakate determines to destroy it; however, not before allowing Evan one dose of its hallucinogenic powers, which briefly transforms this black-and-white masterpiece into color.
We never know what happens to either of the central characters, but it doesn’t truly matter, because as in all such transformative works, it is the voyage that is the true focus, not the characters who undergo that voyage. Ulysses is only fascinating for his adventures, and upon his return to Penelope is simply a boring old man.
Embrace of the Serpent won the Art Cinema Award at the 2015 Cannes Film Festival, and best picture at the 2017 Riviera International Film Festival, as well as being nominated for the Best Foreign Language Film at the 88th Academy Awards.