Luca Guadagino | Call Me by Your Name

AN AFFAIR TO REMEMBER
by Douglas Messerli

James Ivory (screenplay, based on a fiction by André Aciman), Luca Guadagino (director) Call Me by Your Name / 2017 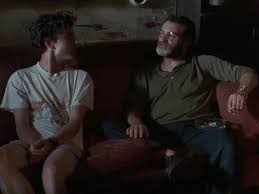 The most profound moment of this sad romance is when Elio’s father invites him to sit beside him and attempts to explain that instead of trying to forget his first-love experience, tamping it down to something regrettable, that he should celebrate the special love that each had shared with one another, that life itself would slowly offer choices that would steal away those very joys that his son had so wonderfully experienced. Keep those memories close, he suggests, as he hints that he too might have gone through such a transitional love, but chose instead to keep it at a distance, to move away from it, without ever re-discovering the joys it might have provided him. Such openness of heart and perception is worth every somewhat silly movie of this sort of April-August romance, which could be described of my potential relationship as well.
A telephone call from Oliver, apparently months later, reveals to Elio that his lover will be married by the next Spring. If today that might have seemed a bit equivocal (married to whom, a man or a woman?), we know that in 1983 it was a woman to whom Oliver was now committing himself. But as painful as that news has been, Elio has already come to perceive that their relationship was over. Those few halcyon days would never exist again, no matter if he will find another woman or man to love. The long take at the end of this quite lovely film, with the camera directly placed facing the quite brilliant Timothée Chalamet, embraces his beautiful face as tears gradually well-up in his eyes and fall gradually over his chiseled cheeks, a fire crackling before him like an inferno of new possibilities or perhaps intense pains of suffering. We cannot know which. First loves merely introduce us to the rest of our sexual lives.

Posted by greenintegerblog at 1:02 PM