I must admit, as I move into writing about Martin McDonagh’s 2017 film, Three Billboards Outside of Ebbing, Missouri, that I am most definitely not a McDonagh fan. His films and plays generally have the cynicism of Coen brothers, without their stunning abilities to tell stories. Read my nearly outraged review of his In Bruges in My Year
Both play with broad caricatures, but the Coens are clearly better in casting. But this time McDonagh has been lucky with a kind-of Coen figure, Joel Coen’s brilliant wife, Frances McDormand, who totally encompasses every figure she has ever played (I’ve seen perform her with the Wooster Group at least 4 or 5 times). In McDonagh’s new work, she plays a kind of Medusa named Mildred, whose heart has seemingly turned to stone with the death of her daughter, who was raped while dying. Along with that event and an ex-husband who has spent years abusing her, Mildred no longer has any patience for the men in her life, particularly when one of the members of the Ebbing, Missouri police force, a deputy named Dixon (Sam Rockwell), is also a racist who clearly enjoys in beating up young black boys.
The well-liked local police chief, Willoughby (Woody Harrelson) has almost let the search for her daughter’s killer become a cold case. It’s not that he hasn’t tried, but simply that no one locally has been a DNA match, and Mildred has been left alone to nurse her pain with utterly no one to help except her kind-hearted son, Robbie (the always charming Lucas Hedges).
From the very start of McDonagh’s new film, he makes it clear that in the intense period since the murder was first reported, Mildred has become a kind of local volcano, ready to blow the entire community away in order to bring some necessary changes to her lovely rural village.
But the fact is that Mildred is not only explosive, but beneath her hard stare, her rough-hewn eyes and nose, is a fiercely intelligent being who can fight it out with the best of them. She has given up her soul so that in this small bigoted and patriarchally controlled village she might survive. What she perhaps really needs is an ally or soulmate like Marge Gunderson of the Coens’ Fargo (a character also played by McDormand) But she surely won’t find one in Ebbing, particularly after she hits upon the idea of renting three billboards just out side of town upon which she places three proactive messages, dark black upon blood-red: “Raped While Dying”; “And Still No Arrests?”; “How Come, Chief Willoughby?”
Yes, as The New York Times critic Manohla Dargis observes, this is her way of reawakening the search and, simultaneously, relieving some of her deeply felt sorrow. But it’s not a popular action in a small town that knows nearly everything about everyone, including the fact that the well-meaning Willoughby is not only a loving husband and father, a man who also, incidentally, is attempting to reign-in his equally angry assistant, Dixon, but also is dying of cancer. The townies take out their anger at Mildred by bullying behavior of her son at school, and various other modes of intimidation, including a Sadomasochist dentist, a slightly mad former soldier evidently living in Idaho, and Dixon himself, who nearly kills the young man who has rented the billboards, and who also attempts, spurned on by his evil mother, to burn down the billboards.
Everyone in this small town seems to be just at the edge of sanity, with all of them so deeply hurt that one might even imagine this is the story of so many small American communities being destroyed by the opioid crisis and lack of jobs. Well, Midwest America has always been a paradisal world in which innocent people are tortured and destroyed. Even the urbane Truman Capote knew that; after all, he had grown up in the deeply dark American South. I spent much of my early life drawing those very connections, and they’re still there today. Small town American simply ain’t always nice.
If McDonagh’s script is all a little pat, with even the police chief coming to her rescue to pay for the billboard’s second month, and a friendly black boy showing up at her door with a duplicate pair of the billboard messages after Dixon has burned them down. And, as Dargis makes clear, the writer-director does not always know what to cut from his own all-to-clever and convenient plot, mixing comedy and horror with equal blends, as if he were simply brewing up a new cup of coffee.
Mildred is a horror, surely, particularly in the mind-throttling society in which she lives, but McDonagh almost turns her into a monster, allowing his character to hurtle Molotov cocktails into the police station and almost killing Dixon, who, although fired, has returned late at night to pick up a letter Willoughby has left him after killing himself. 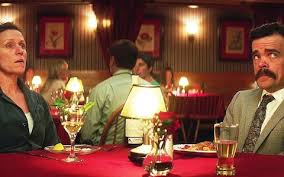 Fortunately, McDormand saves the day. One scene, in particular, reveals her ability to suck in all her hate and come through as an almost charming and, at instants, as a quite visually beautiful woman. Sitting at a local steak house with a dwarf, Peter Dinklage (McDonagh seems to have a “thing” about little people, featuring a scene in his In Bruges as well), she observes her ex-husband (John Hawkes) arriving with his current 19-year old girlfriend. When her dinner, interrupted by  her former husband, turns sour, she picks up a bottle of wine and walks steadily to the banquette in the back of the restaurant; she has already showed herself as a truly violent being, and we half-expect that she is about to break the contents of that bottle over her ex’s head. His clueless and nearly brainless girlfriend, Penelope (Samara Weaving) suddenly admits that her comment, “Hate only begets hate,” was something she had stolen from an article in an essay on “Polio,” which turns out to have been an article about “Polo.” Slowly, as the camera pulls away from this ditz of a being, McDormand carefully puts down the bottle of wine next to her insufferable ex-husband, and commands him to be nice to her, as if relinquishing any rights to her former anger about their relationship. He is now the one in hell, tied to a mindless girl that will surely allow him no satisfaction except in bed.
Whether or not such hate as both she and Dixon share can be redeemed, McDonagh fails to answer, as the two speed off to perhaps kill a man who they believe guilty of rape, even if he has not been the one to have killed and raped Mildred’s daughter. Both have second thoughts, and we can only hope that the voyage they are taking is a kind of short road trip that will salve their mutual angers, allowing them to return home with a new acceptance of life as it is, a kind of aborted Odyssey. In the end, despite McDonagh’s constant insertion of comic elements into his work, I believe that Three Billboards is a kind of redemptive blood tragedy.