I wish I could report that the film I am about to write about, Zenne Dancer, by the Turkish film-makers Mehmet Binay and Caner Alper, was a total fiction; alas, it is based on a true incident that occurred to an acquittance of the directors.
The movie recounts the inter-relationships between three figures, a beautiful male-in-drag belly dancer, Can (Kerem Can), his former gay lover, the university student Ahmet Yildiz (Erkan Avci), and a gay German photographer, Daniel (Giovanni Arvaneh) who, while in Istanbul, shifts from his war-time reporting to the delights of the city, including snapping pictures of Can, whose patronage helps him to survive in a strange world where, in an attempt to escape the military draft, he goes out only at nights to dance without pay at a gay club.
In case it might strike you that Can is involved in a strange activity in belly-dancing with lavish costumes but often with a bare chest that reveals his beautifully chiseled torso, I’ll quote a couple of paragraphs from an article by Tara Isabella Burton in Smithsonian Magazine about the zenne dancers who participate in a popular entertainment in Turkey:

Male belly dancing is hardly a new phenomenon in Turkey. Most zenne dancers date the practice back to the Sultan’s court in the final centuries of the Ottoman Empire, when women were largely prohibited from performing onstage. Much as how boys would play women’s parts in Elizabethan Shakespeare, young men – generally ethnic Greeks, Armenians, or Romani, drawn, often unwillingly, from the Empire’s non-Muslim population – would be trained as dancers, adopt androgynous or feminine attire and makeup, and – in many cases – moonlight as paid courtesans to noblemen.
In traditional Ottoman practice, the terminology of “gay” and “straight” was largely absence from discourse, as explained by scholar Serkan Görkemli. Sexuality was more customarily defined as a matter of status/rank and sexual role. A higher-ranking nobleman would as a matter of course define himself as an active or penetrative sexual partner, one who would under other circumstances sleep with women; a zenne dancer would be expected to take on a more so-called “feminine” sexual and social role. Regardless of whether or not sexual relations between dancers and their spectators took place, however, zenne dancing (and the watching thereof) was considered part of “mainstream” masculine culture..

Even though with Turkish modernization, the zenne tradition fell out of favor, it remains a staple of entertainment in many parts of Turkey.
As a university student, Ahmet is still also very fearful of being stopped by the Turkish military police and being conscripted. In the very first scene of the film, in fact, he seeks to be hidden in Can’s dressing room, fearing that even being seen out at night, and, in particular, in a zenne bar, might draw attention, and he is particularly fearful in this case because of his traditional Muslim parents, particularly his harridan of a mother, who is perhaps the real villain of the work.
Through Can’s agreement to be photographed by Daniel, the hirsute Akmet meets up with the equally hirsute photographer and, gradually over a period of days the two become lovers, while still both remaining friends with the more fragile and needy Can. If both Can and Akmet live basically shadow-lives out of fear for the societal forces, Daniel has the ghost of his past in his sex-wife, who is now his agent and is highly critical of his new photographic interests, wishing he might return to filming on-site battles and the children scarred by war instead of his new fondness for the picturesque oddities of the great Turkish city. 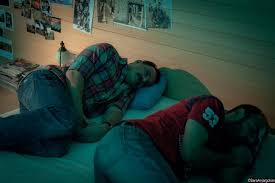 While Akmet’s parents are holy horrors, his sister, with whom he lives, is totally modern and seemingly accepting of his nightly wanderings—except when the gorgon of a mother comes to visit. Can’s aunt, with who he lives, is a loving and caring woman in complete acceptance of his lifestyle, even while her husband highly disapproves; and Can’s mother, living in the country, loves her son so dearly that it truly borders on incest. On a visit to her, later in the film, he can hardly pry her hands from a deep embrace to escape back to the city. The outsider Daniel, given his completely Western upbringing cannot even quite comprehend their predicaments.

And therein lies the rub, so to speak. As Daniel and Akmet grow closer, so too does the German, who is determined to take Akmet back to Germany with him, encourage him to speak out about to sexuality to his parents, as does the obviously utterly outed Can. Daniel is simply naïve, while Can’s motives seem somewhat sinister, since he should perhaps perceive the difficulties of declaring homosexuality in a modernized but still mostly Muslim country—but then his family has clearly adored for being “special.” Strangely, when both men are forced into interviews prior to induction, Akmet gets off for being gay (the Turkish military like to see pictures of sexual penetration to prove those who claim homosexuality, and to this day may have one of the biggest collections of gay pornography in the world), while the zenne dancer Can is accepted: we can always use a belly-dancer in our ranks cracks one military officer. But both men are destroyed by their “honesty,” although perhaps Can survived military duty to return to his love of dancing.

When Akmet finally does confess his sexuality to his parents, the mean-spirited mother forces her husband to take up a gun and to kill his son in a kind of reverse “honor killing,” usually reserved for women who have supposedly been immoral in sexual activity or for divorcing their husbands. In Turkey, evidently, Akmet’s father is still in hiding.
Despite the fact that this is quite amazing and that such a movie was even permitted to be filmed in Turkey, the production values of the work are excellent, the directors working within a fairly large financial investment for such an independently produced work. My only quibbles with the film are its sometimes quite excessive production numbers representing Can’s imaginary choreography of his dances; as one critic observed, at moments the film seems undetermined whether it wants to be a serious expose about the terrible events it documents, or a comic drag film in the manner of Priscilla: Queen of the Dessert.
In the end the film succeeds simply because of its honesty about its trio of gay heroes. And quite surprisingly, when shown in gay film festivals in Turkey, became a great hit, as it was in the gay film circuit in the US—although until its release in Netflix it has not had general US distribution. Even I, who often seek out the unusual, almost passed on this one. Belly-dancing in Turkey, I smirked. But on further exploration, I became more interested, and am happy I was. This is a tragic statement not so much about being gay, but about being different in a culture that is based on broad ethnic and cultural differences, but with individuals often trapped within the confines of those very walls of identity.