THE AWAKENING
by Douglas Messerli

Steven Spielberg’s 2017 film, The Post, had to be made this year, and was an almost inevitable product in a time when our current President is threatening journalists and other sources with erasement of free speech almost daily.
The result of this rather quickly made film (it began shooting on May 30th, and was in the theaters by late December) is a well-made and engaging work, with superior acting across the board, surely a sign of Spielberg’s remarkable artistry, although he’s never been a favorite director of mine. Nor, as anyone who has followed my writing must perceive, has actress Meryl Streep been (who I have often criticized for disappearing into her roles), or Tom Hanks (who I feel is often a kind of lumbering giant of good intentions without deep depth); yet both here served wonderfully in their roles, bringing subtlety and true complexity to the figures they portray, The Washington Post leader, Katherine Graham and the newspaper’s famous editor, Ben Bradlee. I guess I still think Jason Robards, Jr. in All the President’s Men, is more convincing in the role, but then he is the greater actor. Hanks does a more than commendable job, downplaying his do-gooder behavior. And I don’t think anyone could have better captured Katherine Graham, known by all in those days, as “Mrs. Graham,” socialite heir from a father and husband who had headed that paper until her husband committed suicide.
The story of this film, on its surface, is about how The Washington Post, undergoing an amazing change from paternalistically private to public financial support, jumped on the Daniel Ellsberg (played here by Matthew Rhys) release of the stolen Pentagon Papers, which detailed from the Truman administration to the Nixon White House, how our leaders had consistently lied about the reasons we were in Viet Nam and the possibilities of our winning such a war, which cost the nation hundreds of lives. It was The New York Times who actually released the papers and courageously investigated and reported on the large trove of documents. But this version focuses instead on the scrappy little local paper, in those days, who with the help of reporter Ben Bagdikian (Bob Odenkirk) contacting his old acquaintance Ellsberg to procure a second set of the stolen documents. When The  New York Times is handed a court injunction by the Nixon lawyers, the question becomes whether The Washington Post will rise to the occasion to continue the reporting, a prelude, of course, to their later, very brave covering of the Watergate affair.
But the real story here, fortunately, is not simply that fact that Bradlee and others were able to make that happen, but the gradual awakening of a previously protected and male-dismissed highly intelligent woman, Graham, who over just a few weeks finds that she must not only alter her relationships with life-time friends such as Robert McNamara (Bruce Greenwood) and speak out against her all-male board, but chance the entire reputation of her beloved family heir-loom by speaking openly and freely in a time in which the Nixon administration was determined to protect itself by misusing all of their power. 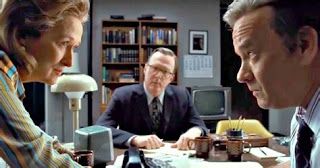 Howard and I were in Washington, D.C. only a few years after, and I would soon write book reviews for The Washington Post under Pulitzer Prize-winning William McPherson’s editorship; and I too, as critics such as Kenneth Turan have written, experienced that storied newsroom, recreated in this movie to perfection.
So too does Streep manage to somehow recreate the spirit of Graham, showing her literally “coming out,” so to speak, from a somewhat clumsy, highly self-aware woman facing entirely hostile rooms of her male colleagues, to become a savvy and quite fearless woman, suddenly able to tell Bradlee to run the articles when all of her other worthy lawyers and board members warn her just what it might mean, including the destruction of all she loves.
Sarah Paulson plays Bradlee’s proto-feminist wife, who finally helps him to comprehend just how brave Graham has been, and Alison Brie performs her equally proto-feminist daughter, Lally, the latter of whom quietly helps Graham come into her own. But it is Streep’s remarkable acting which gives the role the slow-growing depth of personality, where, as if she were suddenly perceiving her power and perception, Mrs. Graham gets stronger day by day, until we now can imagine her as the strong force who made The Washington Post into a major American newspaper during the last dark days of the Nixon reign. This film is not really about the Ellsberg Papers as much as it is about the awakening of that powerful newspaper publisher, and that’s what makes it so moving and significant as a movie, better, in my thinking, than the much showier and plot-driven All the President’s Men—still a movie I greatly admire.

An excellent highlight of this work the moment Bagdikian delivers up a shopping bag to Ben Bradlee, containing newspapers from across the country that have continued with the Ellsberg coverage, meaning that in order to prosecute The New York Times and The Washington Post, authorities would have to close down the entire US newspapers, a shocking possibility. The Supreme Count weighs in, 6-3, that the press has the right to report the truth, something we might remind ourselves in our own dark days.
At moments the script, by Liz Hannah and Josh Singer, is perhaps a bit too overtly didactic—after all they are retelling a story that most younger Americans no longer remember. And I do wish we might have had a bit more of the actual content of the Ellsberg Pentagon Papers to work with, instead of quick headlines. The shocking news they revealed suggested that all politicians lied and lied and lied over the decades, a fact we must face again with the release of the papers by Chelsea Manning and Edward Snowden—and god knows what Mueller may eventually reveal about Trump.
But Spielberg’s film quite clearly points to where it’s going, when, at movie’s end we hear Nixon on the phone, outlawing any The Washington Post reporters from ever entering the White House—the very same moment a young police detective finds that there has been a break-in to the Watergate office of the Democrat Headquarters.