Michael Powell and Emeric Pressburger | I Know Where I'm Going!

HITTING A WALL
by Douglas Messerli

Michael Powell and Emeric Pressburger (writers and directors) I Know Where I’m Going! / 1945

Joan Webster (Wendy Hiller), the stubborn, strong-minded young woman of Michael Powell’s and Emeric Pressburger’s 1945 film, I Know Where I’m Going! almost sets herself up, from the very beginning of this film, for a comeuppance, despite her surety. And already, as she announces to her “darling” elderly father that she intends to marry a man almost his age, Sir Robert Bellinger, we also know that she has utterly no idea about where she might actually be going.
As a matter of fact, she is going to a completely new world, to the (mythical) island of Kiloran in the Scottish Hebrides aboard a first-class train car (paid for by the wealthy Bellinger) and various other methods of transportation, including a boat, upon which she meets the charming and utterly straight-forward naval officer, Torquil MacNeil.
Because of fog, she is delayed in traveling to Kiloran, and the two must remain on the nearby
island of Mull, where MacNeil takes her to the house of his friend, Catriona, a married woman whose husband is away on military duty and her children are at school. Like Joan, Catriona is a strong-willed woman, who has a number of afghan dogs, and is far more eccentric than Joan. Catriona and Torquil are evidently childhood friends, and we suspect as Peter Bradshaw wrote in The Guardian, that they may have once been lovers. She certainly greets Torquil, as well as the surprise guest, with open arms and they now have a safe, dry place to spend the night—or as it turns out to be, since during that night a storm has come up, for several days.

During that duration, Torquil shows her around Mull, including a local celebration, replete with dancing and Gaelic singing and a visit to a local castle, which Torquil reveals is owned by his family, but is himself unable to enter since generations earlier it had been doomed by one of his ancestor’s failed marriage.
Gradually, it becomes apparent, Joan becomes enchanted with Mull’s landscape and inhabitants. If nothing else, we become charmed through Powell’s and Pressburger’s beautiful black-and-white representation of it. And, despite Joan’s future husband’s wealth, she discovers that it is her naval officer friend, who truly owns the castle Bellinger is simply renting: Torquil, it becomes apparent from the Mull islander’s comments, is the true Laird of Kiloran, who as Catriona suggests, can no longer afford to live in his ancestral home.
In this sense, we quickly perceive that the true royalty of these islands are people like Torquil and Catriona, not the fabulously wealthy Bellinger, who is merely a tenant.
Clearly the head-strong Joan does not quite want to assimilate this fact, but the directors quietly help the audience to perceive that the more down-to-earth figures Joan has already met are far superior in heritage and demeanor that the lover, to whom she’s apparently determined to link herself simply because of his wealth. We never meet Bellinger, but we now most certainly dislike him, and know that if she does marry him she will never find happiness.
Determined as ever, moreover, Joan convinces a poor boatman to take her out in the storm to get to Kiloran, even though everyone describes the voyage as treacherous, since between the two islands exists a deadly whirlpool whipped up by the storms. In her determination Joan risks not only her own life but that the young boatman.
Discovering her absence, Torquil queries Catriona, who tells him what Joan has done. But just as he is about to dismiss her—Catriona herself, as Bradshaw has suggested, perhaps somewhat willing to see Joan’s departure as “good riddance”—his “old friend” reveals to him that Joan has left not to reach Bellinger, as much as to escape Torquil’s charms. 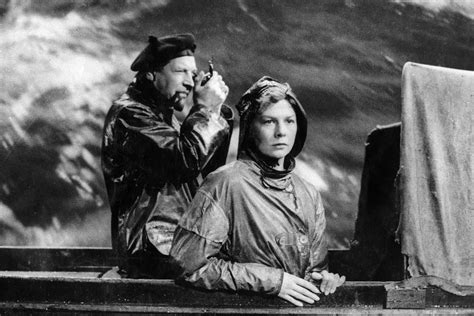 Like a matinee hero, the navy man determines to save the day, himself steering the boat out of harm’s way. When the boat’s motor stalls, it appears that they will be sucked into the maelstrom, but Torquil succeeds, at the last moment, in restarting the engine, and they move forward out of the eye of the whirlpool—an event as exciting as nearly any scene in adventure films.
So, it seems, Joan is off to marry her “sugar-daddy,” and as we now perceive, to ruin her young life. Yet suddenly she re-appears on the island of Mull with three pipers, ready to marry her new-found love. The curse of the Mull castle has been lifted, and together they enter it anew.
Combining a pure romance, with lovely, documentary-like footage, with a bit of an adventure story, the directors have created a lovely fable of how the Scottish once more (as in Whiskey Galore! and Local Hero) undermine British resolve with charm and understatement.