a brooding presence
by Douglas Messerli

Mike Leigh’s 2014 film, Mr. Turner, which I finally viewed on Netflix the other day, is a physically beautiful film about a rather ugly human being, a removed and somewhat eccentric individual, who 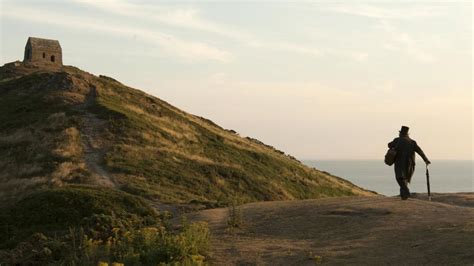 apparently sexually abused his willing housekeeper, Hannah Danby (Dorothy Atkinson) and who forms a closer sexual union with the twice-widowed owner of boarding house in Chelsea where Turner stays, using a pseudonym, in Chelsea, with Sophia Booth (Marion Bailey).
The excellent actor Timothy Spall plays the great artist, J. M. W. Turner, as a kind of taciturn beast lumbering through the beautiful landscapes that are the source of his art. The only time he seems truly to come life is when he discusses color or art with his father (Paul Jesson) or his brilliant Scottish cousin, Mary Somerville (Lesley Manville).
Yes, at moments this strange hero certainly seems foolhardy and perhaps a bit brave, as when he has himself lashed to the mast of a ship during a fierce ocean storm just to be able to experience its beauty and horror in order to depict it in his painting. 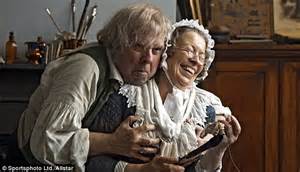 But, for the most part we catch few images of the real Turner’s art, the major exception being a group exhibition with works by Constable and other major figures of the day. Apparently, at least according to Leigh, the painters continued to work on their artworks even as they hung on the museum walls. Turner visits the show, mostly to discover how the curators have placed his paintings, stumbling past the other painters with boorish pretension, declaring, for example, that, in one case, a woman’s leg should receive a bit more highlighting, before startling everyone by placing a large bright red daub of paint in the middle of one of his own seascapes.
For many, it appears that he has intentionally destroyed a perfectly beautiful work, perhaps, suggests one painter, declaring war of the other artists’ clichés. But when he later returns to remove the lower half of the red, creating a small white line in the top of the daub, they recognize it to be a boat buoy that initiates a new sense of the color into the work. It might almost be nice to imagine that, had he not altered the red paint, he might have become one of the first of truly abstract painters.

But then, in some ways, in his wild fury of sky and waves, Turner was a kind of early abstract painter, leading the way, soon after, for the Impressionists.
As critic Matt Zoller Seitz has noted, in the end, there is something truly sad about the artist, who was clearly shattered by the death of his father, perhaps explaining the melancholy feel to the entire film. But, as Seitz also noted, it is difficult to fathom or explain Turner’s behavior, who alternately appears priggish and sexually abusive to the woman around him. He is certainly not a very likeable figure despite his stunning artworks. And, in the end, Leigh’s film, unlike so many of his other works, particularly Topsy Turvy, is simply not much fun. If Gilbert and Sullivan, each in their ways, were also self-centered, abusive eccentrics, the telling of their story, along with their music and lyrics, was a joyful affair, while Mr. Turner, while meticulously filmed, with Leigh’s usual attention to costumes and sets, is, like its hero a rather grim affair, with moments of relief as symbolized by Turner’s brush of red paint.
For all that, one can’t really complain of his directing, since the very way Leigh presents the English countryside is so often utterly breathtaking. Like Turner’s art, Leigh’s movie is a work of dark and somber light, which he cinematographer Dick Pope so lovingly captures that it’s hard to truly dislike this brooding piece of cinema, although I might propose that I probably will never watch it again.