SINS OF THE FATHER
by Douglas Messerli

Pier Paolo Pasolini’s 1969 film, Porcile (Pigsty), is only a little less difficult to embrace than the same director’s last film, Salò, investigating as it does the consequences and roots of Fascism. While in the latter, children are taken by wealthy Fascist supporters to a retreat in which they growingly abuse them, paralleling the moral collapse of the surrounding world, Pigsty tells two parallel tales, one of a young man wandering the landscape in an unspecified historical period around Mount Etna—a landscape used previously in his Teorama. The young man, simply described as the Young Cannibal (Pierre Clémenti), who by film’s end admits that he has killed his father, seems to have been ostracized by society, and is now, apparently, is starving, killing a passing soldier and consuming him, later accumulating a rather ragtag band of followers who terrorize the neighborhood. He and his group are finally captured by soldiers and sentenced to death, while the Young Cannibal strips himself naked, shouting "I killed my father, I ate human flesh and I quiver with joy" before he is killed.
Despite this bleak story, Pasolini films the equally bleak landscape with a sense of great beauty and even dignity, keeping the audience in true suspense regarding the intentions of the handsome miscreant, although it is made clear that he has killed a man simply to dine upon his innards.
The director alternates this sad tale with another, equally sad one, concerning a German family of the 1960s, Herr Klotz (Alberto Lionello) and his handsome young son, Julian (Jean-Pierre Léaud). Although this family lives in a beautiful mansion built by the Wirtschaftswunder (the so-called Economic Miracle) money, and Julian has a beautiful girlfriend, Ida (Anne Wiazemsky, who also

played the memorable female hero of Robert Bresson’s Au Hasard Balthazar), a woman who seems, much like Fassbinder’s Economic Miracle women, very much at home in the new society, apparently has a secret love, and will not travel with her nor commit himself to marriage.
It is only after Herr Klotz’s rival, Herdhitze (Ugo Tognazzi), suggests a business merger that we discover that Julian’s real loves consist of the pigs on his father’s estate and, a bit like American playwright/poet Rochelle Owens’ 1965 play Futz and Edward Albee’s later play of the strange ways of the heart, The Goat, or Who Is Sylvia?, shocks us with the truth. In Pasolini’s telling these extreme individuals do indeed represent human destruction and rebellion against corrupt systems as in Owens and Albee, Julian’s ending, alas, is more similar to Tennessee Williams’ character Sebastian Venable in Suddenly, Last Summer, particularly when Herr Klotz’s son is eaten by the pigs he has bestialized, just as Sebastian is “eaten” by the boys he has fucked. 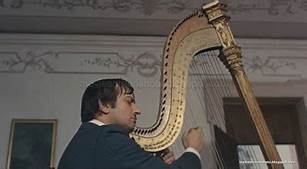 While we certainly recognize that Pasolini is making some highly political commentary in comparing what appear to be ancient medieval systems with the Wirtschaftswunder and, by association, with the Third Reich--the very same connections made, more brilliantly by Fassbinder a few years later, particularly in his In a Year of Thirteen Moons--there is still something fetching and disconnected in his tales. Yes, the Young Cannibal of the lover of pits may be the natural result of their parental desires for vast power and wealth, but Pigsty doesn't really reveal that, but merely points to it, almost as if it should be self-evident.
Any of us who were born during or shortly after World War II know that to be the case, but, although certainly using the kinds of satirical tropes that Fassbinder did, doesn’t truly take it to the surrealist perspectives of Fassbinder’s work or Bernardo Bertolucci’s The Conformist, of a year later.
Nonetheless, Pigsty is an important film in Pasolini’s career, demonstrating his historical sense of horrifying behavior resulting from the even more terrifying greed of a previous generation, the sins of the father, in this case, need to be more carefully reiterated.