As in most of Stephen Cone’s films, the central character of his newest film, Princess Cyd, is open—open to life and new experiences. She is young, and has the confidence of all young people, without

the fears and depressions of her elders. One might almost say that such a viewpoint is at the heart of most Cone films; well some of his figures, particularly the most religious of them, seem trapped in their lives, most of his characters seem to simply not yet made up their minds of whom they like and what they believe. Like young pre-college and college students of his films are simply and openly “searching,” seeking out what most of us have forgotten: who they are, what they want to believe, and where they may be going later in their lives. There is an open freshness, accordingly to Cone’s films, wherein young people simply are allowed to explore their options without adult or even peer judgment, and, as such, his films appear almost as a tonic in a world of fictions, films, and other works that determinedly deposit specific viewpoints, however much they might attempt to hide them as open possibilities. In Cone’s films, characters move in directions you might never have imagined or even approved of. His figures don’t yet have answers, or, even if they do, as in Princess Cyd’s older aunt, they are still open to new possibilities.

Cyd is not princess, despite her open assertion of just such a position, but a young girl, who has, perhaps, given her mother’s early death and her father’s apparent depression, been treated as a kind of princess, a blonde soccer girl, comfortable in her own body, even if she is perhaps rather intellectually lacking. As she immediately declares to her award-winning writer aunt, “I don’t read.” Fortunately, this somewhat pained aunt, who has long lost touch with her niece, fuzzily explained by the girl’s relationship with her difficult father and her mother’s death by murder years earlier, who grew up in a house where her aunt, Miranda (Rebecca Pence) still lives. There is clearly been some deep resentment between both the aunt’s and Cyd’s father, but, as in most of his films, Cone does not center his narrative on sins of the past, nor even problems that might be central to his characters. What his films do is to concentrate on the present, on the hear and now of relationships that lead not to revelations of the ugly pains of living, but the possibilities of curing in the now.

Miranda is a liberal, even if she is clearly seeking spiritual salvation, and she simply swallows her pride in her own writing career in welcoming into her house this young, rather rambunctious sports girl, who is as equally at home in her own body and beliefs as Miranda is in her more ritualized life. Cyd (Jessie Pinnick) is, in some senses, a kind of smart-aleck girl, who obviously doesn’t easily take to adult auditing. And fortunately, Miranda’s tolerant acceptance of her for a summer, works out nicely, almost too predictably, into a friendship which will help enlighten both of them.
It’s not that Cyd doesn’t challenge her, or that Cyd’s careless behavior doesn’t make it difficult for Miranda to deal with her new young charge. Cyd is impolite, interruptive of the careful life she has cultivated. But Cone, never a director who judges his characters, gently puts the issues out before us, sometimes perhaps a bit too correctly, allowing both to work on a kind of assimilation that helps both of them and regenerates their lives. Cyd actually begins to read, Miranda questions her more conservative values, including what her spiritual search is clearly to replace any sexual encounters. Cyd challenges these, suggesting she seek out the company of a dear black friend who is part of Miranda’s literary salons. And Miranda pushes back with an explanation that sex is not everything, 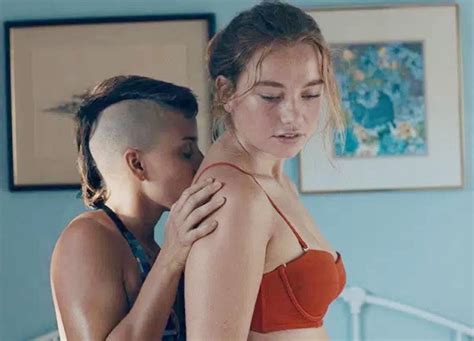 while Cyd herself explores an entirely new world, given her rather previously undeveloped friendships with males, with a trans-sexual figure, Katie (played by Malic White, an individual who has since described herself as trans-sexual), wearing a stylish Mohawk haircut, and with whom Cyd immediately falls in love.
Yet, where most directors might present these issues as a kind of polemic, resolve perhaps with mutual growth in both the opposing figures, Cone’s characters are never really oppositional. They listen to one another, and, yes, they both grow in the process, but don’t necessarily change completely from their original selves. Rather, as in nearly all of Cone’s films, they simply adapt to one another, learning from the people around them, listening—just as we are made to listen to their different points of view.
In this new film, Cone sometimes doesn’t quite get his generous points of view right, intruding, it seems to me, with a slightly abusive male intrusion and some rather sanctimonious scenes regarding Cyd’s and Katie’s odd relationship. We might simply say, that just like the young boy in Luca Guadagnino’s Call Me by Your Name, Cyd is simply comfortable, like so many young people today, with experimenting with love, trying out things the previous generation were far too timid to peruse. This is not truly a “queer” movie any more than was Guadagnino’s lovely film, but both reveal a different kind of openness to sexual difference. We can only hope that what we see in these films is true, an acceptance of sexuality in a way that is so very contrary to my own generation.
If nothing else, filmmakers like Cone and Guadagnino represent something new, graceful and charming in a way we might never have imagined. Perhaps in the near future, we can even stop characterizing films such as Princess Cyd and Call Me by Your Name as gay or lesbian. They are simply tales of young people exploring sex.