John Frankenheimer’s 1966 film, Seconds, has got to be one of the most surreal and odd films released by a major American film studio (in this case Paramount Pictures). Certainly, the work is
rightly characterized, along with The Manchurian Candidate and Seven Days in May, as one of his “paranoia” trilogy, with cinematographer James Wong Howe’s camera whizzing above and below and whirling over and about all characters and objects.
The story, based on David Ely’s novel and adapted by playwright Lewis John Carlino has many of the same elements as Georges Franju’s Eyes without a Face and the later Pedro Almodóvar work The Skin I Live In. Like those two films, Seconds involves a complete transformation of the body, in this case through an underground organization run by a disreputable doctor, an Old Man (Will Geer), and a Mr. Ruby (Jeff Corey), who seek out unhappy beings ready to shed their former lives and identities.
Arthur Hamilton (John Randolph) is just such a being. Although he has apparently made it good as a businessman and lives in a lovely home in the Manhattan suburbs with an attractive wife, he is clearly at a mid-life crisis, unable to enjoy anything and no longer interested in having sex with his wife. Randolph plays somewhat like a lumpen beast who sweats constantly, a man in a crisis of conscience but who also desperate to get out of the life he has built up around himself.
Enter, through a phone call, an old friend, Charlie Evans (Murray Hamilton), who is though to have died. The phone call, in the dead of night, opens the possibility of a new existence, and Arthur is highly tempted to take up his “dead” friend’s offer. In fact, the first long scene of the film shows us Arthur, taking the train home, being followed by a man who offers him a small piece of paper with an address on it, as if he were being offered entry to heaven.
Of course, it is a hell for which he sells his soul, as the address he first visits shows us: a man sweating over a pressing iron. The “new” address turns out to be an equally gruesome place, a beef storage firm, whose foreman, addressing him now as Mr. Wilson, transfers him—much like a cow gone to slaughter—to the mysterious organization’s offices, by comparison lush quarters, with a Picasso hanging on the wall.
After meeting with Mr. Ruby and the Old Man, Arthur signs away his life and hands over $300,000 to be “reborn” through an operation and a highly staged “death.” It’s interesting that the three major “reborns”—actors Greer, Corey, and Randolph—had been blacklisted a decade before this film was released.
The director must also have a had a great laugh in casting the handsome Rock Hudson as Randolph’s replacement, itself a kind of ironical statement given the fact that Arthur (now Antiochus “Tony” Wilson) had ceased being interested in his wife. 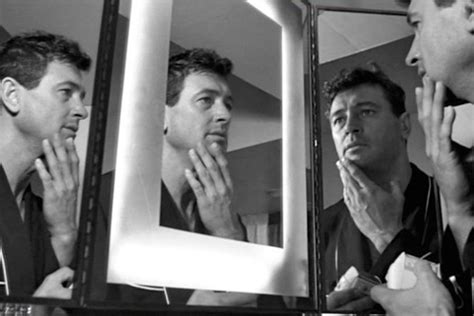 But even Hudson plays it fairly “straight,” reiterating some of the doubts that Arthur himself had had, and carefully imitating some of Arthur’s body movements and affectations. As outrageous as it appears to discover Hudson playing such a serious science fiction role, the actor gives a rather convincing performance of a man at odds with his own body, fearful, as surely Hudson himself had often been, of giving away the secrets that lie within.
It’s also fascinating that the “organization” now with a male houseboy to help with his assimilation into his new life. The houseboy keeps suggesting that he might want to give a party for the neighbors near him—obviously others who have had similar transformations.
Ultimately, Wilson determines to give just such a party, which turns out to be an orgiastic affair where a nude woman begins by stomping grapes, as others, male and female, strip their clothes and join her. I don’t I had even seen so much nudity in an American film of the 1960s. When Wilson is finally asked to join them, he does so in complete hesitation, determining that this is not the life he had imagined after all.

Returning to the doctors to express his doubts and to request yet another identity, he is assured that his concerns will be taken under consideration, but just before he is about to undergo the new operation, he perceives that he will be killed, his body used as a new “catalyst” for yet another customer. The final shot of the film is a drill entering Wilson’s head.
Although this film was entered in the Cannes Film Festival of 1966, it was booed, and the audience laughed. The film did little better on its US release. Yet today, it appears on The National Film Registry, and has gained a cult-like status. The advances in rhinoplasty and body replacement have almost made such a transformation possible and have created implications that almost suggest what was seen at the time as science fiction is almost now reality. And today we can envision Hudson in a different way that audiences might have at the time.
In the film Hudson’s character, after having expressed a desire to be an artist, is now given the chance to paint, only to discover, obviously, that he has little talent and can never put more that a few lines to his canvas, while, in his former life as a banker, he was a genius. The irony of this, particularly working his later years, after his Doris Day period, must have struck even Hudson, and it shows, if not in his acting skills, on his darkened face. He’s scared, probably of playing someone that comes so close to the bone: a man hiding out in his own skin.
Today, we might almost think of this film as Frankenheimer’s most honest film, were it not that his other two “paranoia” movies have struck a new chord in the days Donald Trump.