the delights within
by Douglas Messerli

Many critics of the day reacted to Masahiro Shinoda’s 1977 film, Ballad of Orin, quite negatively, The New York Times critic,Vincent Canby, harshly criticizing the movie as being all surface, a pretty gazetteer of Japanese tourist destinations without any heart for its central character’s plight. “You've 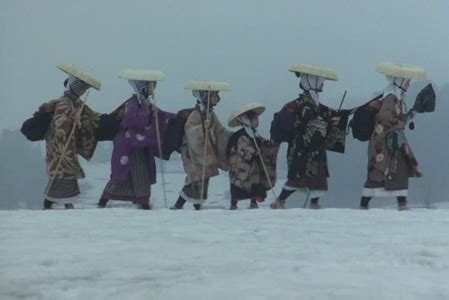 probably never seen so many beautiful mountains, plains, seacoasts and quaint villages, in sunlight, rain, snow and fog, in summer and winter, spring and fall,” writes Canby while declaring the work as “false.”  Others found the work quite “boring.”
Well, yes, Ballad of Orin is quite beautiful in a rather bleak way, since much of first half of the film is shot in a wintry coastal city where the blind girl, Orin (played by the director’s wife, Shima Iwashita) was born, and where she was taken as a young girl to a goze group, a community of blind women who, working together, survive by performing traditional songs at family celebrations and other events. In a sense, it reminds me of a kinder version of the once popular schools for the deaf

and blind that dotted the American landscape—a kind of method for families to dump their deaf and blind children with whom they couldn’t cope.
But the goze were also highly religious, Buddhist in their vision, and strict in their demands. Pleasure, especially sexual pleasure, is outlawed, and any goze who had sex is immediately ostracized from the community, forced to go it alone.
Orin, a great beauty, is raped by a relative of one of the group for whom they have just performed, and is quickly sent packing, spending most of her sad life wandering across the landscape. It may often be a beautiful landscape, full of dark waving reeds, stunning waves pounding the beaches, and stunning picturesque mountains, but it is not an easy and emotional rewarding life. Moreover, Orin, a kind of stubborn woman, enjoys the warmth and sensual pleasure of the male body, and is quite determined to spend much of her life in the arms of some of the men before whom she performs. By the time she meets and equally strong male figure, Teruyo (Tomoko Naraoka) who, we later discover, is military deserter, a figure as equally on the outside of Japanese culture as Orin. Indeed, despite the film’s prettiness, the director portrays war as being always at the edges of this world, threatening to tromp down and away whatever beauty might be perceived. And, at one moment, Orin, cane in hand is knocked down and nearly tromped to death by a squadron of marching soldiers. Pretty? Not quite. 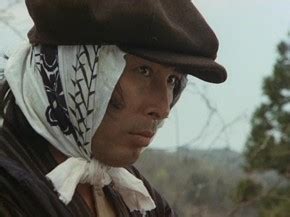 Nor is her strange relationship with the deserter ever quite explained; all we know is that what she most seeks, bodily warmth, ever provided by him; he refuses to sleep with her but determines, rather, as a kind of protective companion to stay by her side without sex. We might even suspect that there is more than a simple aversion to violence to his desertion.
And Teruyo, who becomes a gentle cobbler, is not a coward, daring to kill a peddler who rapes Orin, now further threatening his existence by becoming not only a deserter but a murderer. And the police do finally uncover his existence.
Yet in his relationship with Orin he has transformed her from an utter outcast to a real woman, who might be a wife or a simply a talented contributor to the society at large.
Roger Ebert has argued that the filmmakers of Shinoda’s filmmaking generation are far more explicit about Japanese cultural differences than were Shinoda’s own cinematic heroes, Yasujiro Ozu and Kenji Mizoguchi, but, in fact, his subject matter—despite his careful narrative explanation of events—is far more esoteric. The goze tradition and the militaristic nature of Japanese culture are simply more mysterious and inexplainable than were Mizoguchi’s prostitutes and Ozu’s tight-knit conservative families. And, accordingly, Shinoda is forced to more explicitly explain the culture to his Western audiences.
If Orin seems, as Canby claims, to lack heart, it is not that she isn’t filled with passionate emotions, but rather excluded from the larger society, is not permitted to openly express those feelings. If there is an utter restraint in Ballad of Orin it is anything but a polite prettiness, but rather is a cauldron of restrained emotional responses. Orin might as well have been a young Chinese girl with bound feet; yet, nonetheless, she has escaped her roped, open clogs the goze employ to walk through the snow, but she has not been quite able, except with Teruyo, to open up about her own feelings. When she does, wondering why he won’t have sex with her, we see glimmers of a kind of ur-feminist, a woman who openly speaks about her own feminine desires.
If Orin is finally undone by her male companion, that is the way of her world, in which male desire has so very determined her life, even within the all-female society in which she grew up, that she is not even surprised. It is something she simply recognizes, given the difficult life she has survived, it’s simply a matter of fact.
Canby’s right in one sense only: Shinoda’s film is not “sloppy.” It is as carefully crafted as a Japanese bento box; but o the delights of what is within? I will return to those treasures again and again.

Posted by greenintegerblog at 9:00 AM