William Friedkin | The Boys in the Band

Mart Crowley (screenplay, based on his play), William Friedkin (director) The Boys in the Band / 1970

To say that I have mixed feelings about William Friedkin’s film The Boys in the Band of 1970 is an understatement. In 1969, during the original run of Mart Crowley’s play, I volunteered as an usher for a few nights at Theater Four, where the work ran for two years. But a year later, back at the University of Wisconsin, with Howard and other members of the university gay liberation group, I picketed the film for its stereotyping of gay behavior. 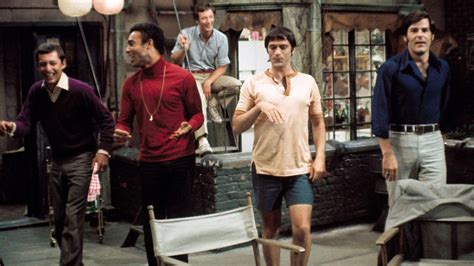 I was just old enough to recall scenes very much like the one Crowley portrayed, where a group of homosexual men, who perhaps knew each other far too well, would gather and try to be wittier than the others in Oscar Wilde-like quips, mostly dishing the others for their past and present digressions. The goal was to out-do one another in outrageous put-downs, while also satirizing oneself. I was young enough to find it somewhat entertaining, and clever enough to spout a couple of zingers each evening. What I hated, however, was the exaggeration of these events, the adoption of feminine names and personalities, and the closeted and claustrophobic self-hatred that often emanated from the group.
Of course, just attending such an evening clearly meant you were, in fact, queer, and gathering with the others you were publicly announcing that. The patois spoken by these groups was evidence, itself, of being in the know, sharing in a kind of private language which the society as a whole would find difficult to comprehend. And if, in their put-downs, it might superficially sound as if the entire gathering hated each other, it was really a reassertion of love, the way a stereotypical Jewish family might endlessly kvetch to one another for their behaviors. Love and family were at the heart of such events. In fact, only someone like Woody Allen can match Crowley’s loving cruelty of one’s own kind.
But in the two-year period since the opening of Crowley’s play things had radically changed. People of our generation (I met Howard and began our life-long companionship at age 23), influenced by feminism and gay liberation, were no longer self-haters, and did not generally see ourselves as feminized males. We now felt we needed to take our rightful places in society at large, speaking out to that society with voices that could be comprehended and help make change. In a strange sense the very opening up of society that made The Boys in the Band so successful soon made Crowley’s then-courageous play seem like a sad relic, an ancient ritual that demonstrated the isolation and tragedy of gay life.
Watching that film again, after 49 years, resulted in similar contradictions represented mostly in the fact that I seemed to be laughing and crying throughout much of the movie at the very same moment.
What I also had forgotten is just how much Crowley had used character-types to represent the larger gay world. There is the former alcoholic “intellect,” Michael (Kenneth Nelson), who, at the center of this birthday bash, falls off the wagon; his sometimes lackadaisical, underachieving lover, Donald (Frederick Combs); the “nelly” queen/designer, Emory (Cliff Gorman); the straighter school teacher and photographer couple, Hank (Laurence Luckinbill) and Larry (Keith Prentice), the dumb hooker/cowboy (Robert La Tourneaux), the black, Bernard (Reuben Green), and the pock-marked Jewish boy, Harold (Leonard Frey), all of whom I had seen in the original off-Broadway play. 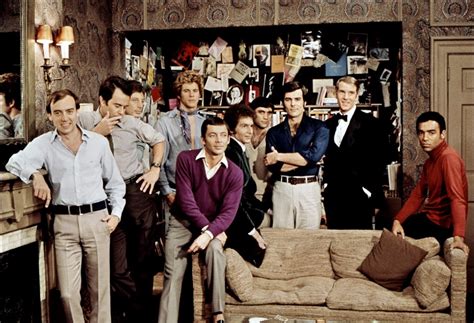 These very types, of course, allow the film to open up also discussions of other feelings of outsiderness due to ignorance, anti-Semitism, racism, and patriarchal male notions of masculinity, while Michael’s alcoholism gives rise to his bad behavior which spins the work into the nightmare world it becomes when he insists that they all play a telephone game (this was a time of old-fashioned phones) in which they must call someone from the past whom they first loved. Actually, given the facts of my first love, which I recount in My Year 2005, the former high school football captain who later killed himself, I wish I might have played such a game, letting him know, what he had perhaps known better than I, that he was not alone, and that he had been loved from afar. And I later discovered that I was not the only one in my school who secretly loved him—if you can describe teenage attraction as love.
Into this madhouse of “screaming queens” stumbles Michael’s college roommate, Alan McCarthy (interestingly, the only character given a last name) (Peter White). Having evidently fought with and having left his wife, Alan has sought out Michael, perhaps as a friendly advisor or maybe as an alternative life-style—we never discover the truth—but his call, nonetheless, is the only one that is truly answered, and which results in a resurrected relationship. In short, Crowley seems to suggest that only heterosexual love can redeem a being, while the world in which these gays must endure is something close to hell. 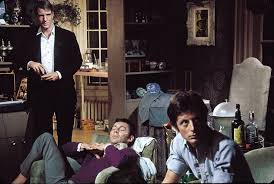 At the same time, the world Crowley portrays, in its exaggerated honesty, is hilarious through its never-ending barbs of self-honesty and familiar love. They dance, they sing, they bitch, they kiss and make-up, and, ultimately, they leap into one another’s arms in tears of pain. Yet together they get through each night. It’s certainly a more entertaining world than the quiet evenings Alan is doomed to play out with his wife in his so very proper life. We really don’t care about a winner like Alan; we only care about the loving losers of this work.
And I am finally able to embrace this film as a document of gay life, about a time when gay men felt it necessary—when they were not sharing in the bar life, where Friedkin’s film begins—to lock themselves away each night.
The earliest scenes in this movie were filmed at Julius’, in the West Village, the bar where I began my evenings every night before heading off to wilder fare. That was in 1969. After I met and fell in love with Howard the following year, we quickly became a couple who was accepted by almost everyone we knew. When we left Washington, D.C., where I was a graduate student and Howard, at the end, a curator at the Hirschhorn Museum, The Washington Post, for what I believe was the very first time, referred to the two of us as a couple. I might imagine that the very day we protested the film The Boys in the Band, we left those oh so clever living rooms and bedrooms and never looked back. It’s odd, but over the years, we have had very few gay friends, but so very many heterosexual ones. We quickly came to feel at home in the world at large instead of an isolated society, as I think a great number of gays also came to feel. We never imagined that one day we might be permitted to marry; we were married in our eyes and in those of our friends.
Crowley’s play and Friedkin’s movie revealed, even as they first appeared, a world that had already been relegated to a scrapbook. This year, now the 50th since the play first opened, Joe Mantello is directing a limited run on Broadway. I’d love to be there, but probably won’t; I’ve seen it played out in real life too many times.

Posted by greenintegerblog at 8:51 AM