The other morning I decided, somewhat reluctantly, to watch William Wyler’s 1936 satiric look at marriage based on the Sidney Howard play and Sinclair Lewis’ 1929 novel. I do not think Lewis was the great American novelist that the Nobel literary committee seem to have thought he was, and I find most of Wyler’s works to be charming comedies and soap-operas. Although the play did well on stage in 1934, Howard isn’t my idea of a great playwright.
Nonetheless, I was open to viewing the whole of this (I had previously viewed certain scenes), and I was actually quite delighted, although it is a soap-opera and a simply directed work, not a great one.
But I do wish I had seen this film while I was at work on the book Paul Vangelisti had asked me to write on “marriage.” I think it would certainly represent a far darker aspect of the vision I expressed in that series of essays, although I certainly did have a lot dark views to offer.
The fact is that the couple in this work, Sam Dodsworth (Walter Huston) and his wife Fran (Ruth Chatterton), at least at the beginning, even seem compatible, easy with one another, and solid in their devotion. What we do know, and don’t truly blame her for it, is that Fran is utterly bored with life in Zenith, Ohio, where her husband has developed a successful auto works business, and from which, to please his wife, he is now retiring so that they might travel to Europe—representing a kind of late life European tour. Yet it appears that only Sam, despite his fierce Americanism, is the only one truly interested in the culture of the countries they visit. Fran is trying to find new love and friends.
The vain Fran seems primarily interested only in a kind of last fling as she flirts, quite unsuccessfully, at first, with Captain Lockert (David Niven), who responds to her but is spurned when he tries to turn into a sexual romance, and later with the wealthy Viennese Kurt Von Obersdorf (Gregory Gaye), whose mother, the Baroness, finally nixes Fran’s plans for divorce and remarriage to Kurt. 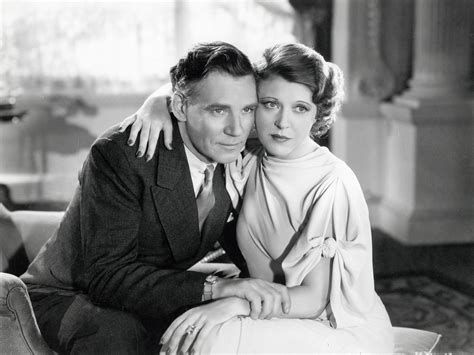 A home-boy at heart, and a true family man, Sam is willing to return to the US to again see his
daughter Emily (Kathryn Marlowe) and her new husband Harry (John Howard Payne). And given his wife’s open flirtations, he is willing to leave up his wife. Besides, he has met the wonderfully open and knowledgeable Edith Cortright (Mary Astor), who plays the woman who might have been his perfect wife. The truly sophisticated Cortright, obviously a survivor of her own failed marriage, now lives in a small villa in Italy, and introduces the always curious Sam to the joys of European living. But Fran’s desperation in having been rejected by the Von Obersdorf family, demands that the loyal Sam return to his narrow-minded and endlessly selfish wife.
During the filming, Astor, who had had an affair with playwright George S. Kaufman (and who had kept their extensive correspondence and, apparently, a diary about all her affairs), was currently appearing in the divorce proceedings against Kaufman, during which, I’ve read, she hung out mostly in her studio trailer to escape reporters. Clearly, it was the scandal of the day; I recall Howard’s normally open-minded father tsk-tsking about her behavior while we were watching a production of Meet Me in St. Louis in his Baltimore living room, a reaction that shocked me more than anything she might have done.
Yet Astor and Huston are the true treasures of this film. Huston, channeling Gary Cooper to a certain degree, makes the American “hick” Dodsworth a truly likeable and honest being, as opposed to his affected and snobbish wife. Certainly, one of the funniest lines in all of film history, moreover, comes from Astor, who, when Fran declares herself 35, and dares to say to Edith:

Fran Dodswoth: I hope I look as good as you when I'm your age.
Edith Cortright: You're almost sure to, my dear.

That bitchy line might have even come out of Clare Boothe Luce's The Women.
Despite the soap-opera mechanics of Howard's script and original play, there is a great deal of humorous wit in the work that comes mainly out of the mouths of Astor and Huston, but also from the confused and befuddled Fran that in the final scene will serve as a good example:

Yes, we are now sure that not only has the American rube bolted to live a European life, while the fake sophisticate is now doomed to live out her life in Zenith, but Sam has escaped the deadly bonds of her false loving, and now can truly enjoy his life. It’s an odd redemption for the man who was previously so home-sick for American soil. It’s clear he has become the true expatriate, while Fran has remained the Puritan American, despite her flirtatious and sometimes shocking sexual behavior.
A bit like George Minafer in Welles’ The Magnificent Ambersons, Fran Dodsworth gets her comeuppance by simply having to live the rest of her life with the insufferable small-town people whom she has tried to escape.