weavers of dreams
by Douglas Messerli

Let me begin this review of Luchino Visconti’s 1957 film, White Nights, by doing something I’ve never before done, recommending that you first read a piece titled “Meet Me Tonight in Dreamland—Luchino Visconti and White Nights” written by critic David Melville published in Senses of Cinema. In fact, I will be sharing many of Melville’s ideas, while also hoping to introduce many of my own. 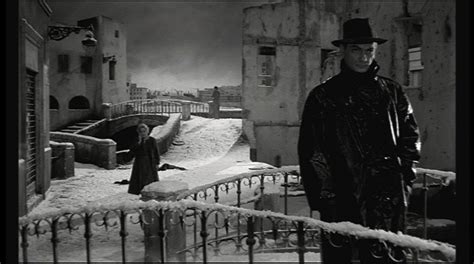 Melville argues that this film, based on a work by Fydor Dostoevsky, which Visconti transferred from the canals of St. Petersburg to the arched bridges of the provincial Italian town of Livorno, represents a landscape that is “slightly false” (I’d call it purposely “theatrical”) while yet pretending to be realist. We must recall that Visconti, a truly theatrical filmmaker by the end of his career, began as a kind of neo-realist. But then almost all the neo-realists later turned to somewhat exaggerated and unordinary landscapes by the end of their careers. But in White Nights it is clear Visconti wanted to present a kind of realism that moved closer to the world of dreams, perhaps a precursor of what later South American writers attempted to do in their works of “magic realism,” creating landscapes that blurred reality to demonstrate the psychological issues of their characters.
Melville doesn’t argue for this issue, but I do feel in the street-life settings of this film, that the director is creating a kind of hallucinatory world that parallels its heroine’s, Natalia (the outsider character and actor, Maria Schell), state of mind. She, who comes, after all from a land of rug-makers, and whose parents once sold rugs and now repair them, might as well be a figure right out of the Arabian Nights, like Scheherazade, a dreamer who weaves stories to save and redeem her life. Only, in this case, Natalia tells stories to herself, turning her one-time sexual encounter with a handsome older man (Jean Cocteau’s lover, Jean Marais), into a dream-like obsession. She tells her tales to Mario only to save her dreams.
The man she loves, who has been a border in their home, tells her, in a mysteriously-laden explanation, that he must go away for a year to “take care of some business,” but asks her still to try to remain available for him upon his return. Only a fool, of course, would agree to such a proposition. But then Natalia, in her dream-like imagination, is just such a being.
The man she meets just before her “lover’s” return is also a strange figure, Mario (Marcello Mastroianni), a man of the working class, who roams the night streets of this small town to discover and share in exciting liaisons, an activity that Melville compares, again convincingly, to gay cruising.
The night he meets Natalia, it appears he has arrived home too late to truly hit the bars, so to speak, as lights on the small main boulevard go out around him, shutters close, and only one bar remains open. He wanders the rainy streets, looking for something and someone, but, at first, only finds a hungry dog, whom he befriends. Quite by accident he spots Natalia, and later overhears her crying on one of the small bridges that dot this magical landscape. He is, as he later reports to her, “a shy man,” perhaps itself a clue to his own sexuality (although Visconti is very careful to maintain Mario’s heterosexuality in the plot). And he uses that fact as a method to attract her; she sees him, ultimately, as friend more than a would-be lover, which allows him to remain in her company.
Mario, as we later discover, is not quite as innocent as he pretends. When she does reject any advances he retreats, on another night, to the local bar frequented, it is clear, by both prostitutes and gay boys; as Melville points out: “The most erotic moments occur, not between the protagonists, but in a sleazy after-hours nightclub where a black-clad, snake-hipped dancer (Dirk Sanders) cavorts to 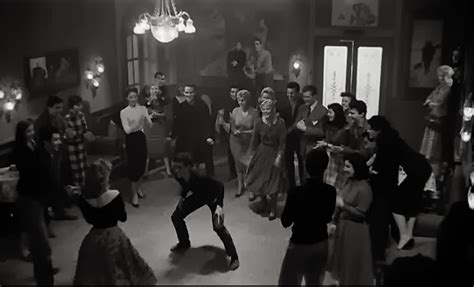 ‘Thirteen Women’, a song by Bill Haley and His Comets.”
Yet, the honesty and obsession of Natalia clearly intrigues him, and changes him as well, helping him to keep a distance from her even as he falls more and more in love with her. Her request that he help write and mail a letter to her former lover, who apparently is back in the city, is met—at least at first—with his consent; he later, however, tears up the letter without sending it. It is his one obvious betrayal of her; but even then, he remains passive rather than completely admitting to his love for her. It is only later that he admits his actions, too late, it appears, since the Marais character has returned to claim his prize.
The lonely and still-unloved Mario, at film’s end, is left alone without anyone to truly turn to. In the very last frames of the film, he is befriended again by the equally searching dog, and they walk away into the night together.
Although White Nights has seemingly remained an under-valued film even by Visconti aficionados, as Melville argues: “With its setting of dark alleys, deserted canals and random encounters, White Nights may well be Visconti’s ‘gayest’ film – even though it contains no homosexual characters or situations. It is perhaps the most evocative film ever about the gay phenomenon of ‘cruising’ and the nocturnal city as a realm of boundless sexual fantasy.”
Clearly this is not the same world of Visconti’s later richly color-infused, gay transgressive films such as The Damned, Ludwig, or Death in Venice—without even the sweaty and violent gay sexuality of Rocco and His Brothers. Nobody (except the director in the subliminal ways I pointed to) even says anything about being gay. The smitten prostitute is rejected by Mario. And Mastroianni, despite his handsome face and physique, is no Alain Delon or Helmut Berger, the latter one of Visconti’s lovers. Yet the glittering, rain-spattered streets of White Nights portray a love quite outside the normal confines of heterosexuality. These figures all know love as an attraction which is based on obsession and temporality, a thing of body and time rather than tradition, family, and commitment.
This beautiful film has a territory upon which Visconti treads much more delicately, like its set, placing it in a world of in-between.

Posted by greenintegerblog at 9:22 AM