so close yet so far
by Douglas Messerli

As in Sean Baker’s earlier film Tangerine, his film The Florida Project deals with individuals who most of his audiences would never have otherwise met. Baker does not sentimentalize these figures but is able to create sympathetic portraits that help us all to comprehend, in this case, families at the lowest end of the economic spectrum—particularly in Moonee’s case  (6-year old Brooklynn Kimberly Prince, the real star of this film), a mother, Halley (Bria Vinaite) who finds it difficult to raise even the $38 a-week necessary to stay in the low-budget motel, one of several lying just outside the gates of Kissimee, Florida’s Walt Disney World. The Disney office originally called the new construction of Disney World near Orlando, "The Florida Project."

The names of these motels, The Magic Castle, Futureland, etc. almost mock the tourist paradise. Yet Moonee and her friends, Scooty, Jancey, Dicky and others will never be able to afford the entry to that magic kingdom and are left alone to roam the scruffy urban territory throughout most of every day. Living the hardscrabble lives they do, these kids are tough and, like many young children everywhere, find ways they can to get into trouble: spitting on the windshield of cars below the second-story balcony of the motel, shutting down the electricity to their building, spying on a topless elderly sunbather woman by the pool, and, in the worst of their delinquent activities, accidentally setting on fire an empty condominium home, which results in Scooty (Christopher Rivera) being removed from the children’s group when his father perceives his son’s involvement in the fire.

Yet Moonee—and by extension, we suspect, many of her childhood friends—also has serious responsibilities, collecting each day the waffles one of Halley’s friends hands out the back door of the restaurant in which she works, and gathering up provisions from a local church food-bank truck.
In fact, we suspect this little “pistol” of a child is more morally responsible that her childlike mother, who, after losing her job as a pole dancer takes up prostitution in her room, locking away her daughter in the bathroom wherein the young girl plays with her plastic toys, creating a kind of imaginary Disneyland for herself. If nothing else, she is the film’s emblem of imaginative thinking, at one point taking her adventurous followers on a tour of what she describes as “Safari Land,” a field of cows.
Almost like Tatum O’Neal in Paper Moon, Moonee plays a wonderful con when her mother buys up perfumes and soaps at a local wholesale shop and sells them to tourists at higher prices. Yet at other moments the child in her comes out as she lags behind her mother to create “sandcastles” in the mud outside one of the hotels. At one point earlier, just to get enough coins to purchase an ice-cream cone for herself and her friends, Moonee approaches a stranger:

Moonee: [to tourist at ice-cream stand] Excuse me. Could you give us some change, please? The doctor said we have asthma and we have to eat ice-cream right away.

If there is any true hero in this ragtag community, it is The Magic Castle’s manager, Bobby Hicks (the always wonderful Willem Defoe), who must play bad cop to many of his customers, including 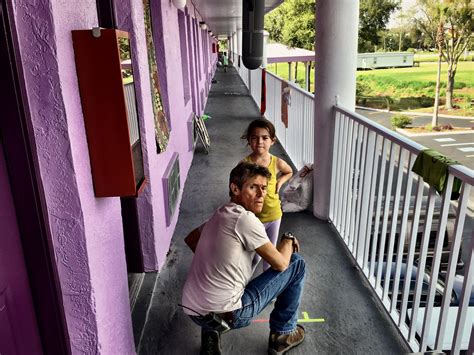 Moonee’s mother, while still gently protecting their kids, scolding them while simultaneously trying to protect them from the nudity of his elderly customer and, most importantly, scaring off a creepy man—obviously a potential child predator—while yet offering these poverty-stricken kids a place to hang out in the lobby and even hide under his protected computer space in one of their hide-and-seek games. He is a kind of hidden saint in a world of no saintliness.
If there is any one father who might responsibly care for them, it is this gentle, hard-working, janitor, care-taker, and enforcer for those, like Halley, who constantly break the motel rules. But even his caring ministrations have a limit, particularly when Moonee’s mother steals Disney passes from one of her clients and then charges a huge breakfast with her and Moonee at the very restaurant where her now former friend works—to the same man’s account. Halley’s robbery is clearly a step too far, beyond even the prostitution which has cost her the friend she had long counted on.
It is almost inevitable, after the fire and Halley’s robbery, that workers from Florida Department of Children and Families (DCF) show up at Halley’s door to take the child into public custody. Moonee, now perceiving her destiny, quickly runs off, her mother chastising the officers:

Halley: [while being confronted by CPS after Moonee runs away] You just let her get away? And I'm the one who's unfit? FUCK YOU!

Moonee proclaims that she is off to the Magic Kingdom, and although we never know and certainly doubt she might ever be able to enter it, we do know that through her imagination she might enter another world even more remarkable. The director himself wrote of enigmatic ending:

We've been watching Moonee use her imagination and wonderment throughout the entire film to make the best of the situation she's in—she can't go to Disney's Animal Kingdom, so she goes to the 'safari' behind the motel and looks at cows; she goes to the abandoned condos because she can't go to the Haunted Mansion. And in the end, with this inevitable drama, this is me saying to the audience, “If you want a happy ending, you're gonna have to go to that headspace of a kid because, here, that's the only way to achieve it.”

Moonee and her kind can only seek salvation in their heads. There is little room for them on earth, and it is only in her daily wanderings that she might find a place to live out her dreams.

Posted by greenintegerblog at 8:46 AM