night and day
by Douglas Messerli

Jean-Luc Godard’s 1967 film Two or Three Things I Know About Her, appeared during a period when his films were not only moving to more political concerns and, despite his love of all things American earlier his career, a time in which Godard was shifting to a strong anti-American sentiment.
These are very much the issues of this film, which is not a typical film narrative as much as it is a kind of essay on the condition of all things French in relationship to the seemingly endless involvement in Viet Nam, which I think it is important to remember, began with the French political and social involvement with that country years earlier.

It’s clear that Godard is highly disturbed throughout not only by the appropriation of American values on French culture, but the culture’s own appropriation of itself; one of the central scenes takes place in a bookstore where a writer and his assistant quote passages randomly out of piles of nearby books, presumably creating a collage of narrative fiction, perhaps not so far different from Godard's own work.
One might also describe this work as a critique of a world, so influenced by US values, that “she (France),” too has turned into a kind of consumer world, in which even the bourgeois housewife at the center of this work, Juliette Jeanson (Marina Vlady) turns herself into a commodity, loaning out her body to loveless encounters each day to earn a little extra cash in order to purchase the new dresses, washing machines, and other products she also daily shops for.

Underneath her everyday movements of shopping, housework, and child-rearing, the voice of Godard himself, kept to a near whisper, speaks of the attempt by the French government, in their attempts to build major new communities on the edge of Paris, critiquing the current politics, and attacking the US involvement in Viet Nam. These seemingly ordinary events accordingly are connected with global governmental forces who, the voice argues, are working to make all of us into mindless consumers—not only of products, but events, and even emotional relationships.
At one point, Juliette visits the garage where her husband works to get the car washed, her best friend, also a day-time prostitute, having joined her. Her apparently near sexless husband greets her simply as if she were another customer, simply briefly conversing with her, before sending her on her way.
How different is Juliette’s day-time sexual activities from that of the central character of Buñuel’s heroine in Belle de Jour, a film made the very same year, and released a couple of months later. Séverine Serizy, married to a handsome doctor, is obsessed by the sexual secrecies of being a day-time prostitute, excited by her new encounters, particularly with a handsome young thug, Marcel—who ultimately turns her everyday life into a role of being a kind of nurse to her husband.
The sexual activities of Juliette, on the other hand, are absolutely banal and as aesthetically boring as the dresses and products she purchases. Her dresses are clearly mass-produced pieces, usually in stripes, whereas Catherine Deneuve in Belle de Jour wore dresses designed by St-Laurent. If Séverine lives with a handsome man, who clearly loves her, Juliette lives with a mechanic who believes life consists of working, eating, and sleeping; along with a constantly crying young boy, she does not live in a stylish Paris apartment, but in the bland high-rise that government has built to house its poorer citizens.

Séverine works in a discrete apartment complex, whereas Juliette encounters her men in dreary hotel rooms or, even when she and her friend actually encounter an American in an expensive hotel, want to play games more than actually have sensual sexual encounters. The American, named by Godard as John Bogus (Raoul Lévy) dressed in an ugly T-shirt emblazoned with the American flag—himself a former American advisor for the Viet Nam War—asks Juliette and her friend to cover their faces with air-line shopping bags while he films them. Juliette passively opts out of any later activities in which her “friend” participates.
In fact, the “her” of this film is not simply the mindless female protagonist, but is, given the French feminine endings of so many words in the language, many other things, a thing that stands in for all those “others.” As the promotional film poster argued, “her” is the subject of :

HER, the cruelty of neo-capitalism
HER, prostitution
HER, the Paris region
HER, the bathroom that 70% of the French don't have
HER, the terrible law of huge building complexes
HER, the physical side of love
HER, the life of today
HER, the war in Vietnam
HER, the modern call-girl
HER, the death of modern beauty
HER, the circulation of ideas
HER, the gestapo of structures

Yet, ironically, as the title of Godard’s film admits, he only knows 2 or 3 things about “her,” or evidently about all these other issues. This film is not, after all, not a listing of endless grievances, but a kind of playful discussion about the problems of mid-20th century life in Paris, given the world which surrounds it. If that world has become a bit tawdry with all of, particularly its American influences, it is still a kind of charming fantasy. As the Caterpillar tractors remake the very nature of the outlying regions of the city, they also churn up the ugliness of the former concrete and asphalt 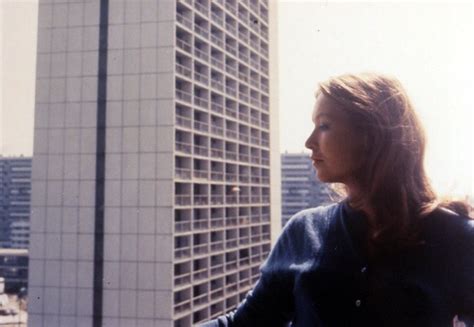 landscape, bringing, if nothing else, new life to the region. This neo-capitalism may, as Godard seems to be arguing, break up also the charm and former structures of French life, but the habitants of these new spaces, like Juliette, seem happily enchanted by their lives, the rhythm of which seems to be, drop the kid off at the daycare center, go shopping for a new dress, have a little sex on the side, meet up with friends or even flirt with local coffee-shop customers, get groceries, pick up the child, go home and cook your husband a good dinner.
If Godard is clearly mocking mid-century French life, the people who suffer it seem placid as sheep walking into the slaughter-house. And like a neighborly gossip, the 2 or 3 things that the director whispers into our ears, ultimately don’t add up to much. His goal, it appears, is simply to get us thinking about a much longer list.

Posted by greenintegerblog at 9:13 AM