Somewhat like his 1976 Sebastiane Derek Jarman’s Edward II is a film about gay men who were martyred for their love. In both films the language used is from other times, the first presented in Latin, the second using the language of Elizabethan playwright Christopher Marlowe. And both of the movies juxtapose scenes of the period with postmodern intrusions, particularly in Edward, in 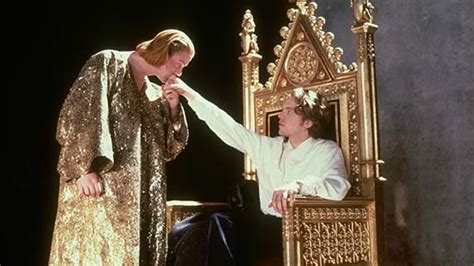 which characters sometimes appear in Elizabethan garb, but just as often appear in modern suits and dresses. Furthermore, overlaying the Marlowe work are scenes of contemporary gay protestors and a singer (Annie Lennox) performing Cole Porter’s "Ev'ry Time We Say Goodbye." Yet, even with these clashes of purposeful anachronisms, there is something lean and spare about Jarman’s direction, allowing us to focus on the language itself.
The film begins with the death of Edward’s father, and Edward (Steven Waddington) calling home his lover, Piers Gaveston (Andrew Tiernan) who has been banned from England by the Bishop of Winchester (Dudley Sutton) for his relationship with the then-Prince. Now, after being given several royal titles and full use of the exchequer, Gaveston tortures the Bishop with a mock sex orgy and targets various barons and other royals who long disdained him with imitative monkey-like gestures. He is a rather unlikeable fellow, whom only Edward loves because of his unequivocal love of the King. 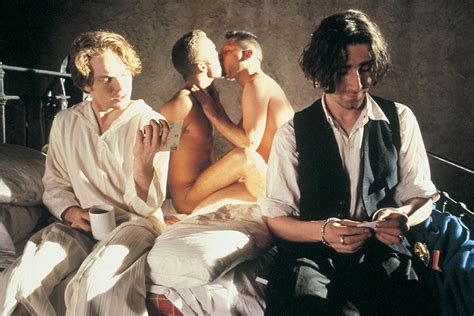 One of Gaveston’s most mocked targets is Isabella (Tilda Swinton), the wife Edward married in France, who hurries back to the castle and hopefully to her husband’s bed the moment he is crowned. Edward rejects her, while replacing her position in bed with his male lover.
In revenge, Isabella joins up with the chief of the army’s forces, Mortimer (Nigel Terry) in the hope to agitate among the royals and citizens for the ouster of Gaveston and her return to the Edward’s favor.
If, at first, their attempts to disrupt the homosexual relationship, seem to fail, they ultimately get the barons, the bitter Bishop, and others to sign a document demanding Gaveston’s banishment once again. In order to retain his power, Edward is forced to sign, saying goodbye to his lover in the beautiful Porter ballad with a final dance, one of the most lovely and peaceful scenes in the film. Porter might have been proud.
Isabella, who now hopes to regain her proper role, is rejected even more thoroughly by Edward, and in the hope of maintaining any power, allows Gaveston to return. But when this still has no effect, a bit like Sebastian’s Serveus she plots Edward’s and Gaveston’s deaths.

Returning to England, Gaveston and his friend Spencer (who apparently also shares the King’s and Gaveston’s love) the two outsiders are captured and tortured by the sadomasochistic Mortimer. When Edward’s brother Kent attempts to warn him of what is happening, he too is killed by Isabella. Edward to locked up, and we see a man arriving to kill him, presumably with an insertion of a hot iron poker into his ass, apparently so no one might perceive any outward bodily harm.
We soon discover this has actually been Edward’s nightmare, and when his executioner actually does arrive, he simply kisses the King.
If Isabella and Mortimer might now hope to enjoy their power-grab, it is short-lived. In the last scene of the film we see them both in metal cages, above which Isabella’s, child, Edward III, dances with his Walkman, dressed in his mother’s earrings, heels, and hat. The basically ignored child, who had perhaps seen too much of the palace intrigues, becomes, in this version, a “girl boy,” the moniker which Mortimer had attributed to Spencer. Although, in reality Edward III was more of a warrior and loyalist than a sexual rebel, he did rise to power at an early age to take the rule away from Mortimer and his minions. 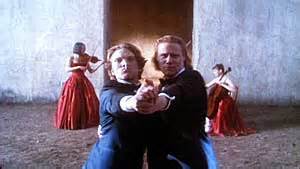 In Jarman’s version, accordingly, the gays win their freedom. It is interesting the document the barons and Bishop sign for Gaveston’s banishment is dated 1991, the same date as this movie, described by many critics as an important document of queer film, only a year after gays had established Outrage, clips of which can be seen as supporters of Edward in this film. In that respect the film celebrates its own audacity and expression of gay rights, turning Edward’s reign to an expression of their own values.
If Edward II is not as sumptuous and beautiful as Sebastiane and Caravaggio, it stands as the most straight-forward and Brechtian statements of Jarman’s beliefs. The Isle of Man rejected its sodomy laws only a year later. Three years after this film, the director sadly died of AIDS.